Women in Iran have been working for progress for years.  But of late, with the surging growth of right wing radicalism throughout the world, the aggressive bigotry of some men in Iran has become more pronounced.  So this young lady who was visiting Iran for a holiday, took her "head covering" off, in a park and waved it, as passing women laughed and cheered.  The religious police, arrested her, beat her, took her to one of their "jail" centers, put her in a locked room with several "brave" men, and they simply beat her....to death.

People in Iran by the millions protest all across the nation.  300 more killed in fresh attack on youth and demonstrators 10/25/2022.  The "morality police" are killing more and more kids.  The total killed is estimated to have grown to 300+ now, and still increasing as the militant regime has resorted to lethal weapons, beatings, and over 6,000 are estimated to have been put in prison, many subject to torture there.  Iran's bearded wonders, and the "morality police" give a "lame and untrue answer"  that IT IS THE USA AND ISRAEL DOING THIS.   No one on earth buys this argument.  It consists of idealistic kids, youth, saying: "Enough, it is time for progress. Time for a change."   Our question is what leadership will arise from the blood letting and when most of the world sees that Iran's old leaders are near losing control. Well they have already lost the moral high ground.  They and the radical militants simply don't want to lose the strangling hold and control they have had, and abused for the past 30-40 years.

Thank goodness, these young people have reminded all Iranians, that the country still can be a world leader with it's educated and motivated population.    If the "bearded wonders" and "morality police" don't kill all of the bright and motivated youth, who are demanding progress. Seems that every decade or so, the uprising and revolts happen.  Intelligent Iranians know their nation has suffered from bad politics and incompetent leadership.  They simply get "beat down" every time they attempt change.  Many around the world, hope this time, the deep seeds for progress and change are being planted.

This time the women of Iran have taken to the streets. In every major city of the country women have poured out into the streets.  And guess what, Iranian's self appointed religious warriors have also poured into the streets, with guns and clubs shooting and hitting, wounding and terrorizing women brave enough to face pain and death have been when any woman falls, 5 others take her place.

The various radical and militant groups of Iran have long liked racing down streets with walls of cycles each with 2 men, one driving, while the other sits behind him and beats citizens with bats and clubs or loaded guns,  sending crowds running while others lay bleeding in the streets.  Cycles run over some of them. Videos abound, with cycles and a form of "Police" terrorizing women, there are actual videos of women being shot in the streets.  Why?  They dare to not be forced to wear a veil or hijab (Scarf) are being beaten, run over, shot and sent to hospitals.

We are told that many of the militant police and "morality police" have been recruited from uneducated youth and men of the rural countryside, because the educated young people of the cities and universities, all seek progress.  We also have been told that there are many defectors from government police and military units, all are influenced to support calls for progress and a better leadership for Iran.

Consider, how ironic.  Iran, a nation known for it's excellent medical training, great schools of science and a people who love education, poetry, history, being dominated but violent thugs, who terrorize and dominate women in the name of religion.

I admire those women who have the courage.  Those who are wounded will always remember their "heroic courage" and leadership for change.

I remember the students who erupted in street demonstrations a few years ago and watch videos of some of them dying.

But Iran's "bearded wonders", old men who still have their hands choking the political freedoms from the general public, using religion as a hammer to intimidate and rule the people, are on borrowed time.  As they leave or die off, it will take determination and leadership for Iran's leadership and direction to change and improve.

The irony is magnified, because Iran has for decades been a nation of brilliant teachers, poets, and people of education, science, and intellectual progress.

A dear female friend of mine, worked as a medical apprentice in Iran, and told me of a girl who was pregnant, but she and her parents came to the hospital and begged her and the doctors not to tell anyone that she didn't have a stomach tumor,(she was pregnant by a boyfriend,) and feared she and he would be killed if the truth came out.  So the hospital staff treated this "tumor" just to keep the radical religious fanatics from killing their daughter and future grandchild.

Or the day that she, a doctor's assistant, while working to save lives, took a lunch break, and heard a crowd, as she walked a man said:

"Sister Sister take this rock and when we say "Allah Akbar", throw it at the woman.  She looked and a woman in a park was buried upright with her head out of the surface.  "We are stoning her because she was not married and slept with a man".  The man, dead had already been stoned beside her.  Then the crowd called "Allah Akbar" and the man who gave this medical assistant, a rock said: "Stone her sister! Stone her!.   It was that day, that my Iranian friend said:  "There were so many incidents like this, I decided to leave Iran!"

Consider this world we live in today.  The people of Russia invade the People of Ukraine in a war where Russia is killing children, civilians, and sending drones "made in IRAN" to destroy schools, hospitals, apartments where innocent civilian people live.  The people of  N. Korea brag that they now have nuclear rockets.  The people of China still fight viruses, that may have started in their own labs, killing millions around the world.  And huge numbers of powerful and rich criminals around the world exploit the poor and ignorant.   And with economic troubles and climate changes, we have to deal with the bigotry of ignorant men against women. One religion against another. One political ideology trying to destroy another.

Amazing this "spiritual leadership" in Iran that the old men with long beards have led the nation, and resort to violence, torture, and murder.  They pretend to be direct voices of God or Allah or whatever. But they act just like criminals and despots throughout history.

We have our crazies and nut jobs in Texas and Alabama & there are cowboys walking around with assault rifles, thinking they are the new "saviors" of the USA.  Fortunately the vast number of Americans ignore them, and live peaceful lives.

In almost every nation there are violent radicals. What a world we live in. But in Iran, the "thugs with guns and a badge" seem to have rules to oppress and destroy this revolution of young girls who simply don't want to be beaten or tortured because they do not wish to wear a head scarf.  Simply hard to believe, especially in a land of great people, educated and civilized in Iran.

But in the educated population of Iran, that once had intellectual and spiritual leadership of the Zoroastrians, now has evolved backward and down.  To see on the news, a beautiful young woman be dragged off by "religious police" for not wearing a scarf and cruelly beaten to death...this is ignorance and cruelty and mean and angry energy...coming from the "educated land of Iran".

What a deep sign of the times.   Stupid and ignorant men, meaner than even the "Cowboys with Guns" of Texas or the KGB of Russia.  Meaner than the NAZI's, meaner than the "Black Power Matters" bunch that love to burn and vandalize.     Gee.  What depraved "spiritual leaders" must have allowed people to kill and torture  "kids who want progress".

Enough to make us pray, and put locks on doors, and lights and walls around us.   Thank God for these brave young women in Iran willing to speak for enlightenment! 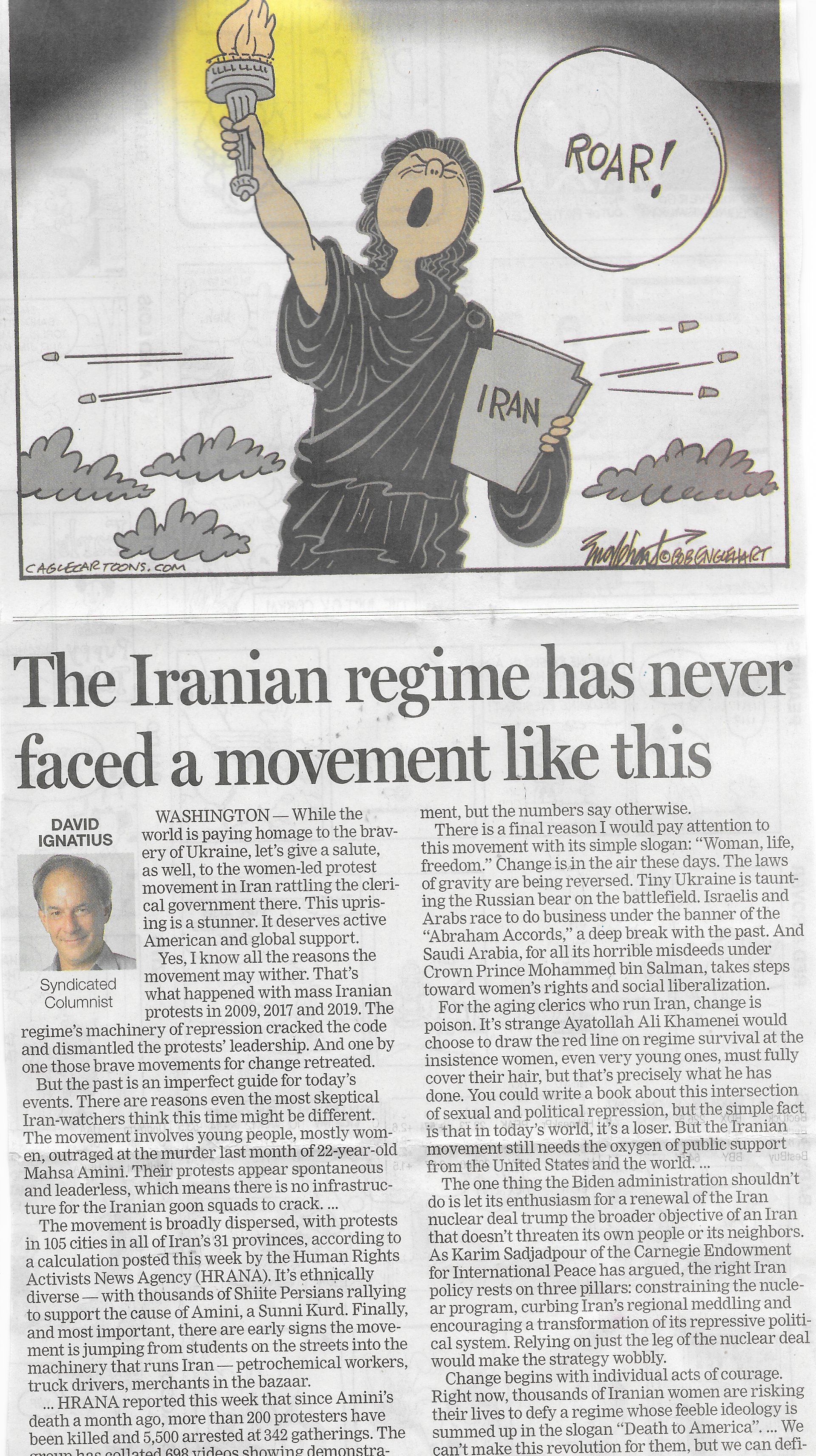 MORE KIDS KILLED BY THE MORALITY POLICE OF IRAN, FOR CRYING OUT FOR PROGRESS OCTOBER 15TH!

Today's news reports 10/25/2022)that show that more young Iranian young people were shot and killed by the "Morality Police" during  peaceful demonstrations.   If this is how the nation of Iran, and it's spiritual leaders, teach morality we are stunned.  Surely this can't be how good leaders lead and how a nation responds to youth crying out for progress.  The "bearded wonders" who lead the country will probably need to seek new employment, if shooting and murder is their "spiritual leadership" in Iran.  I have been surprised that the most influential "bearded wonders" have not stood up and spoken for progress, have addressed the real problems, and brought in new ideas and new leadership. What have they said in public?  "Blame Israel and the USA for these demonstrations".  That might have worked 30 years ago, but no one is buying that.   A nation crying out for progress, change and better leadership, kindness of citizens...not murder and intimidation.  National leaders and spiritual leaders don't treat citizens that way and expect the people of a nation to follow their "spiritual" style.  More killed every day.....by "morality police".... and this is how Iran treats it youth?    We, the world, are so disappointed.  But still in hope that new rational and progressive leadership will evolve from all of this violence.

Pray for peace.  Love your fellow man.    This is the insanity that seems to be evolving around our world.  Thanks for those willing to speak out and cry for peace!  Great nations around the world are seeing millions hit the streets to demonstrate in support for the "kids in Iran".   Germany just had millions on the streets all supporting the girls of Iran.

My prayer.  Lord send new and wise, leaders for Iran. Men of depth and goodness. Men and women of perspective.  God we need leaders for peace, harmony and calm love.