RUSSIA'S 80 YEAR OBSESSION WITH EMPIRE MAY BE IT'S POISON PILL

Someone in the Kremlin of Russia, came up with a story that a little farming country to the south was "to be siezed because it was a threat."   Moscow announced to them that they are going to take all, or a part of the country.  The little country said: "Why?"  "No, you can't do that!"  Russia invades.  Sound familiar?   The year was 1939, Joseph Stalin a cruel and rough leader of Russia wanted Finland. The world was in a world war with Nazi Germany and the nation of Japan.  Well, Finland and Russia have never had a marriage, and their courtship has been hostile at best.

Truman and Churchill must have been curious when Joseph Stalin seemed  eager to "change sides" and join in an effort to battle with the ALLIES in WWII.  It must have seemed congruous to see the Stalin of cruel warlike tendencies sitting beside Churchill and Roosevelt, as new "saviors of the world" trying to end WWII.   After a while, the new President of the USA,  Harry Truman began to put pieces of the puzzle together.  Stalin wanted to ride on the power and war machines of the USA to give him more leverage to attack and take over the many small nations near Russia's borders.  He, wanted to expand the legend of the man who expanded "Massive Russian Empire." 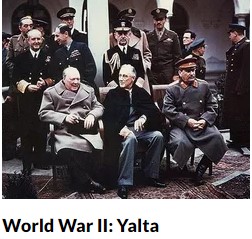 The story should remind us, that Russia has been obsessed with taking the smaller nations that border or are near Russia, for over 8 decades.  It seems that leaders of Russia catch an infection, that creates a "fever" to restore or expand the Russian Empire. Remember World War II? Started 9/1/1939 and ended 6 years later, Sept 9, 1945. 50,000,000 people died in WWII.  It became a surprise question, to President Harry Truman when Stalin became friendly and offered to join the US in invading parts of Europe.  Stalin wasn't known to "join up just to help friends" while offering to help the US to end WWII.  Truman wondered: "What does Stalin really want here?"  But then Truman began to see Stalin's movements of troops and war equipment, working to seize and claim the smaller nations that bordered Russia in Central Europe/Central Asia, to expand Russia's Empire....to  "absorb those smaller nations."  Some believe that was the factor that helped Truman decide to drop atomic bombs on Hiroshima and Nagasaki, on August 6th and 9th.   Truman wanted to steal some of Stalin's thunder.  Even at that, in 1949 the Soviets increased their control of some governments of Eastern Europe, and finally in 1989, there was a collapse of Soviet Control, of Eastern Europe (bad economy, repressive government policies, creative rebellion in Eastern Europe).

Stalin and those who led Russia after him, always had a dream that "I will restore and expand the great Russian Empire".  Every one who has tried has failed, including Putin, who has the same ambitions.  Young Americans today should look at Russia's history. Theirs is a history of 80 years of wanting to expand Russia, give it more access of economic growth as well as new access to ocean ports for world trade.  But in the process, the people that Russia tends to take over by intimidation, bribery, or violence, tend to reject and resent being under the "yoke" or Russia.  So when WWII was officially over, Russian leaders such as Stalin, eagerly wanted to "grab what they could" in an attempt of Russian empire building.

Why?  The pattern has gone on for 80+ years. Embedded corruption of Russian leaders over the last 80 years, where a few in Government, enrich themselves with power and money, while the people, struggle and live "lower, penalized" lifestyles.

What Stalin could not take with armies or warfare, later leaders such as Putin, gathered a financial army of oligarchs who he helped soak up money from Russia's system and government, and accumulate billions, while the people struggled. Those who have spoken out against the embedded "corruption" of Russian government leaders, are silenced by prison, or by having their lives vastly punished. Some who Russia's leaders can't intimidate, buy or control, are assassinated.  People of the USA and Europe who deal and trade in international business, know and it is an "open secret" that doing international business with Russia, is fraught with corruption, bribery or worse.    So the end of WWII was just another beginning of many decades of corruption and abuse by some leaders of Russia.

It should not be surprising when one finds out that multi millions of dollars tend to flow from oligarchs of Russia, to the United States, to get wealth out of Russia to a place where it might be safe from the hands of "other" or "competing" powerful Russian Government leaders.

So today we have a culmination of years of strategy, systematic high level "Buddy Buddy" alliances so that the "many" millions of Russian workers, can only watch as government favors and money go to a few of the new "super wealthy" who only want more money and control.  The old idealistic Communists such as Lenin, probably have rolled over in their graves many times to see their ideas of Communism (which was  to keep a few from controlling most of the wealth, at the loss of the people), have a system far more corrupt of concentrations of "crooked wealth" in the hands of a few Russians, at the loss of millions of poor Russians who by the millions live in poverty and under a government that rules by propaganda and outright militaristic power politics.  At times, almost a police state.

So in Russia today, "freedom of speech" has been compromised.  Leaders who wish to run for office offering an end to corruption in Russian government, are imprisoned,  poisoned, or simply disappear.  Wealth made by dealing with German, American, French, Italian companies is often taxed, sometimes seized and funds given to the new groups of billionaire "OLIGARCHS"  who happen to be friends or partners with Putin and his band of cronies.   Russia's leaders of today, make the Nazi's of Hitler, seem mild by comparison.

At least military leaders of Germany, tried to oust Hitler on occasions, when they figured he was evil or perhaps unbalanced.  We know of no such beacons of courage or integrity in the Russian system, and fear they have been eliminated by Putin's cronies. The question arises, are there any Russian people of integrity and strength left to rise up, and form a new government of high ideals in Russia?  One must hope that in a nation of so many people, so many cultures, that there are beacons of light and hope in the nation.

For that reason, it has been encouraging to see Ukraine fight back against 10 to 1 odds, for truth, for independence, and for a higher value system.  And we are encouraged to see NATO nations and especially the USA to stand up and support the Ukraine people for resisting their being absorbed and dissolved by Russia.  If Ukraine wins it may mean a new Europe, a new world of hope.  Ukraine has already won the 'moral' battle, the heroic battle.  Is there any hope that truth and light will overcome the dark manipulations of Putin that has cost the lives of so many?

I have looked at the Foreign Trade Balances of nations of the world.  Russia and China had two of the highest amounts, but it would seem that Russia's excess funds, have been depleting rapidly.  Nation after nation has decided to no longer to business with Russia, or buy Russian goods.  Will the vast increases in food costs, agricultural grain crops, fuels, and shortages in consumer items, manufactured items, lower Russia's power and wealth?  It already has. Russia it has been said, has already been set back by decades, because of this invasion of Ukraine, and it may take decades for Russia to recover.   Doing wars, is an expensive hobby, Mr. Putin, can you really afford it?  And with the massive wealth that the oligarchs have lost, is there any move among powerful Russians, to consider changing the leadership of Russia?   We do not know, but millions of people around the world would like to see new leadership in Russia...before the nation goes down further. Or before Russia leads the world into a global recession.

The expansion of NATO is probably wise, if for no other reason to "close down" some of Russian expansionistic tendencies.  Russia will have it's hands full to feed it's own people, if it continues these little wars, to "expand the empire". Indeed these warlike policies may shrink Russia's influence substantially.

Our German friends might suggest a brief poetic statement:  "PUTIN, KAPUT"   There are millions of well educated and good moral Russians.  We hope and pray good leaders will emerge to help Russia become a beacon of light in the world.  Not a shadow of darkness.