Mask or No Mask. The WHO says with dangerous new Variant, To wear a mask even if you have been vaccinated 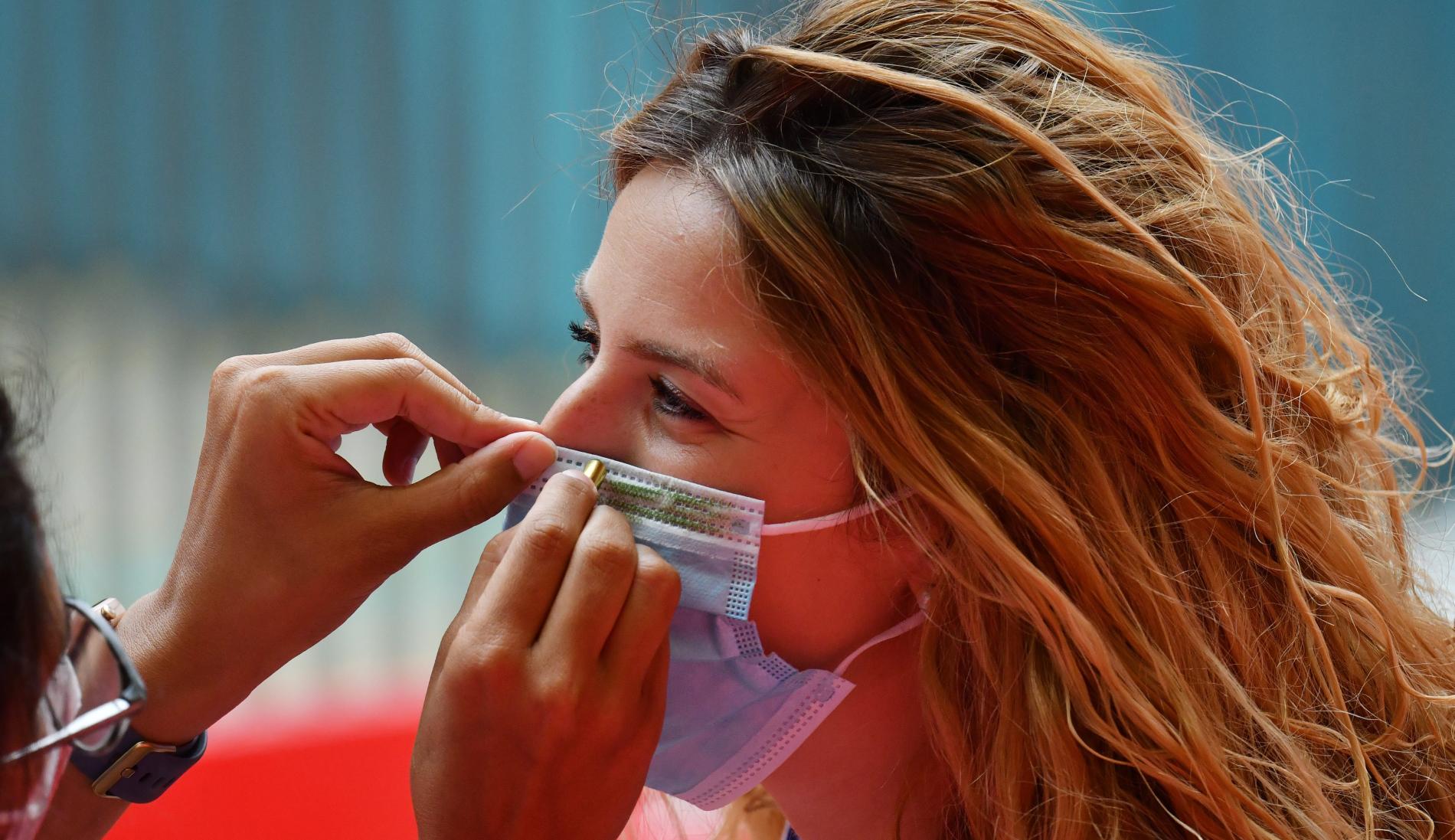 A month and a half ago, the US Centers for Disease Control and Prevention (CDC) Announced that fully vaccinated people no longer needed to wear a mask outdoors, or in most indoor situations, to protect themselves and others against Covid-19.  The news was received with relief, but it raised concerns too.  After all there's yet to be conclusive evidence that vaccinated people cannot spread the virus.

"The pandemic is a long way far from over" WHO Director General Tedros Adhanom Ghebreyesus warned today.

I thought about that while my wife and I were in the grocery store today.  A lot of the people were still wearing masks.  I think, even though I have had both shots, I may start wearing a mask again, just to be smart and careful.   This variant kills, it is more dangerous than the original virus, and it is all over the USA, including New Mexico, Arizona, Colorado and Texas.

The new Covid-19 variant is spreading fast around the world, and accounts for up to 20% (and rising) of the new cases of the virus in the USA.  THE WHO (WORLD HEALTH ORGANIZATION) is again stressing the need to wear masks. "Vaccine alone won't stop community transmission" said Mariangela Simao, the WHO assistant director general for access to medicines.  "PEOPLE NEED TO CONTINUE TO USE MASKS CONSISTENTLY, BE IN VENTILATED SPACES, PRACTICE HAND HYGIENE, AND MAINTAIN SOCIAL DISTANCE...AVOID CROWDING".  she said.

Sadly, masks are a partisan issue in the USA.   This happened in 1918, when the Spanish Flu killed more of our soldiers than WWI killed.  There were those who complained in 1918 that they shouldn't have to wear face coverings, or stop going to bars and stay away from crowded meetings.  They were violent, and sadly, many of them died of the Spanish Flu.  I fear many from places such as Mississippi and Arkansas who have refused vaccinations, will suffer for their attitude.

Uneducated, socially backward,  or lower economic areas seem to have the highest disease, the highest death rates, and the lowest vaccination levels.  Mississippi is a perfect example.  But sadly, politics has woven into this medical issue.  45% of Republicans reject a vaccine, while only 5% of Democrats reject the vaccine.  Republicans are preaching a gospel that people not wear masks. Democrats by vast majorities wear masks.   Nearly all cases of Covid 19 are people who refuse vaccinations or refuse masks and social distancing.    Republican dominated counties often have the highest virus rates. WHO is stressing that the new Delta Variant, can cause new uprisings of illness and death. This virus doesn't care if you are Republican or Democrat, but with most Republicans avoiding their doctor recommendations,  they are at higher risk of illness or death.   "Community Transmission is again increasing in some areas" we are told.  Some at the CDC are considering that they may need to recommend and revise safety standards to stop a new epidemic.  It seems odd, that in an educated nation such as the USA, a nation that has led the world in science and good health standards, has politicians make "staying at risk" a political issue, their bad advice can endanger human life.

As of June 7, 2021 3,992,000 people have died of Covid  (World Health Organization).  Perhaps it is time to renew our habit of wearing face masks and being careful in crowded rooms.

Most scientists in the field believe that the USA should have heeded the 2003 outbreak of SARS which was carried by palm civets and ferret badgers of China. Then again in 2012, MERS infected the Arabian Peninsula, originating from Camels.   Sadly protective measures organized under the Obama Administration were dismantled after he left office.

The book Pale Rider, with excellent research examines the Spanish Flu of 1918 and any reader would be alarmed at the potential for future viral epidemics.  Then the 2017 book: Deadliest Enemy  points out the danger of viral epidemics in graphic detail.

For years, epidemiologist and public health experts have been calling for plans to deal with a viral pandemic. A lot of these plans and preparation were dismantled after Obama left office, leaving our nation ill prepared when, it hit, during the Trump administration.  A publication called:  “Preparing for the Next Pandemic” in 2005, spoke of organizing private sector food producers, medical suppliers, and heal care providers.  Sadly smart public sector health, law enforcement and emergency management officials found that the "plans to prepare and  to anticipate a new Pandemic", were dismantled by political leaders of the "other party" the following years.

IF WE IGNORE HISTORY, WE MAY REPEAT THE SAME MISTAKES:

In the 22 greatest pandemics or viral epidemics of history, there are several things that have happened. Read this and you may learn something:

But if we can learn some things from history, perhaps we can improve, study, research, and preparation, for the next one to hit.   Sadly, our ‘leaders’ have been unprepared, in the USA for decades.  The most recent example, in 2020, was an outrageous example of malfeasance. Fortunately, the Biden Administration has tried to correct omissions of the former administration.

But in reality,  preparedness has gotten worse.   We see in the USA:

For example,  in 2003, discussions of better supply chains were made. But little was done. This resulted in break downs of the health system, the global trade system (which was already strained due to Trade Wars), food supply chains, industrial products, parts and items became scarce because they were made in China or other nations subject to political trade wars initiated by the US Government.  Even supplies of protection gear & medical supplies as well as equipment was initially sadly lacking.  In our company we needed new “printer toner”.  The local office supply stores said: “No toner available, because it is made in China.”  We had to buy a new printer, and a new brand, so we could get toner for it.    As far as supply chains go, our firm had a client with 20 farms, and he said he had a large herd of hogs, he had raised to sell to meat packing plants.  “I had to execute them and bury them, because the meat packing plants said their supply chains were broken, and their employees had Corona Virus, thus limiting how much pork and beef they could handle or process.    The sad part is that prices for Pork, Poultry and Beef went down for farmers, but in grocery stores prices skyrocketed for consumers.  Someone profited in this scenario, but it was not farmers or American consumers.

THE U.S. HAS BECOME FAR MORE DEPENDENT ON CHINA AND INDIA FOR DRUGS AND MEDICAL SUPPLIES.  For example, I ordered a box of high rated face masks for my office and staff, and when they arrived, the fine print said; “Made in China”.    All along I thought I was buying from an American source.   But it goes further.  Drugs, in mass are made overseas, most of them or their ingredients are manufactured in China and India.    What if, for example, China uses its power to withhold critical drugs to Doctors and Hospitals in the USA?   India, has suffered massive deaths, even though it is one of the world’s greatest makers of medicines and drug products.

Another important issue is the financial stress on American hospitals and health care providers.

Doctors in the USA are retiring or just changing professions in great numbers.  Hospitals are closing or filing bankruptcy from coast to coast in the USA.   Some medical doctors and nurses are working 70, 80, 90 hours shifts, many are just exhausted and quitting.  More examples and cases of the virus are impacting doctors and nurses.

We have seen shortages of hospital beds, physical capacity and huge, unexpected expenses and financial deficits of hospitals in America.  By 2019 an absence of long-range preparation was reported, but in 2020, it became a stark frightful reality. Lack of long-term meaningful preparation continued in spite of repeated warnings and the hints of a possible  100,000, then 200,000 and fears of 300,000 deaths of Americans by year end of 2020 were predicted. They fail in comparison to reality.  Now in 2021, 600,000+ Americans have died, with projections of 700,000 by 2021 and more in 2022.  The Variants have created an entirely new risk factor that has not yet been fully understood or predictable.

All of these matters seriously question a good, solid response of the US or the American medical system to this danger. It now appears that the delays or “downplay” of the danger may have been because of political reasons.  “Corona exhaustion” seems to prevail and people just want to go back to “normal”.   But the new normal will be a different world, with greater emphasis on prevention, air quality filters, UV treatments of environments, new standards of construction, new uses for office buildings and work places, new designs for retail, offices, schools, workplaces.

We appreciate and encourage a call of leaders in government, medical, fields of state and national  levels, to seriously, fund and support efforts to thoughtfully plan, create supplies and support equipment, to prepare for future epidemics.  Make new standards for building standards and new environmental rules and methods to protect us from future viral infections. Most professionals in the field report that there will be “bigger” Pandemics, that could have national and international repercussions.   Boothe Global Perspectives did a research study of the 22 largest pandemics in history (see www.bootheglobalperspectives.com and hit the search box for “largest pandemics in history” .

The consequences of pandemics in history has been devastating on economies, political power chaos, public health, and even is related in many cases to wars.

We are looking to the future and welcome broad and open discussions in meetings around our nation, hopefully in early 2021 and 2022, to bring in the best minds, to discuss:

What can we do, in the future, to prepare for the next pandemic? Do we need new “high tech” facial masks. New High tech HVAC filtration systems.  New high tech monitors in every buildings, to detect toxic viral presence.   We need to stress Prevention and Protection for the future.

It is not our goal to stress mistakes or blame, but to learn from those mistakes and then systematically gather the funds, political power, and medical minds to create an agency or body focuses totally, on “What to do. How to do it better? How to prepare” and then to create a national effort to fund and assure that this organization is effective and relevant.