The City of Roswell, New Mexico found a creative way to make money during the Corona Virus Epidemic.

We were driving from Carlsbad to Albuquerque and noticed pointed angular shapes on the south side of town, and then realized that there was a "herd" of passenger airliners parked at the Roswell Airport.

So we drove over, (I am a pilot and so walked into a local private aircraft hub) and they said:

"Yes, when the Corona Recession hit, the airlines started storing airplanes in towns with a dry climate.   ROSWELL IS HOSTING OVER 600 AIRCRAFT, FROM MAJOR AIRLINES, ALL ON HOLD UNTIL THE  ECONOMY RECOVERS.

Now think how fortunate the city of Roswell is.  Because someone has to pay the city for storage, for security guards, for clean up crews, for airplane maintenance, to keep these airplanes safe and yet ready to fly on short notice.

So we put a pencil to it.  By Calculations of our economist associate, there are about $96,000,000,000 billion dollars worth of airplanes sitting in Roswell.

Can you play a game and try to calculate the average value of each of the 600 planes?  If your calculator is like mine it probably doesn't have that many zeros in it.

But it is a good example of Roswell's creative marketing department. In a time when towns and cities are starving for cash and facing huge unemployment issues, while also facing a deadly virus and the worst recession in 40 years, Roswell is making money in a host of ways, just to let these airplanes be "stored" in their town, creating jobs, cash income, and just as an extra, making a marvelous view for curious  people like me, and BootheGlobalPerspectives.

It is astonishing really, think of it.  An air-force of passenger jets from all over the USA and the world, sitting perfectly clean and ready to go, just waiting on the Corona Virus pandemic to go away.

Carlsbad is another creative community. During the big oil and gas drilling boom, hundreds, perhaps thousands of RV and Mobile Home parks grew out of that arid desert area (because there weren't enough houses or apartments to take care of the oil field workers.)  They called them "man camps".  Then when the price of oil and gas nosedived because of Saudi Arabia's fuss with Russia, (Saudi Arabia flooded the world with old driving prices down to $22 per barrel from $65.  The oil companies closed up and left, many went bankrupt and the city thought it had a but of RV and MH park lots. But they also have lakes, and boating, swimming and places to hike and picnic.

Plus places to take your kids or your dog for a lovely walk, hidden away right in the center of Carlsbad. It is a perfect "hub" to explore some of the beautiful and "curious" places in New Mexico. I would bet that Carlsbad has more new, nice RV and MH parks than any city of it's size in New Mexico.  So you not only have a clean place to "hook up" your RV, but a nice town full of beautiful surprises. 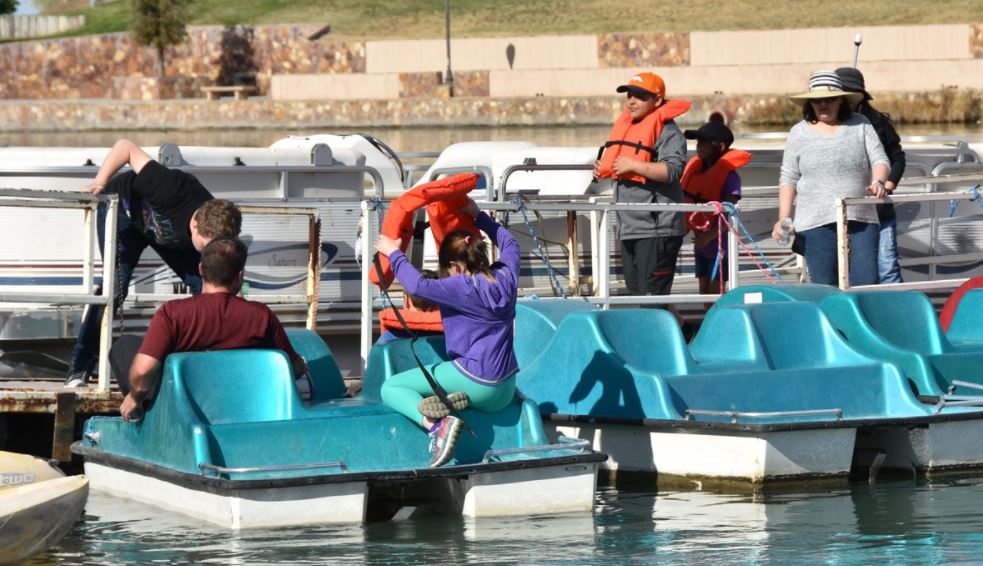 But, then the greatest growth and boom in the RV business caught on. Hundreds of thousands of people sold or left their expensive houses and apartments in New York, Chicago, Miami, Los Angeles, bought expensive Recreational Vehicles and decided to live a few years exploring and seeing the USA and Canada.  It has made anyone with large RV parks a welcome destination, and Carlsbad with the great Carlsbad Caverns, and proximity to Mountains, and the White Stands, and dozens of beautiful destinations, has a new growing industry. Carlsbad, if you have an RV, a Winnebago, or whatever, has not only the new clean places to park and hook up with water, ,sewer and electricity, but a number of great restaurants and cafes, Walmart and cool places around town to walk, and a friendly welcoming population.

So, go to Roswell, see the great collection of airlines that are there. Then take in Carlsbad, and the Caverns, and then head for Ruidoso, or White Sands, the Lincoln Mountains, or even the place where the flying saucer with little green men crash landed, and were held secretly until they died.

You see creative people can even find ways to make a fortune, in the most challenging of times.