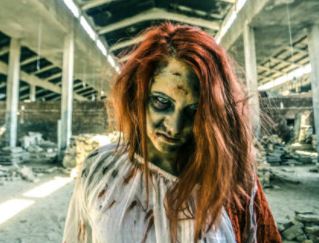 Is this one of your elected officials?  Does she speak

of killing politicians that she disagrees with?  Does she follow strange cultism, or radical violent means to her ends?

Is this your political base? They don't believe in facts, science, law and order? The just march blindly following the lead of who to destroy. They can ignore bigotry, if someone caters to their most personal prejudices and bigotries.

I found Paul Krugman’s book,  Arguing with Zombies,  in a local bookstore, and smiled at the title. It seemed so appropriate to the many political disputes, formal ‘hearings’ in D.C. and a million arguments Americans are having about political, social and religious trends in the United States.

On TV I heard that a “mega church” in New Mexico is having one of those arguments with the State of New Mexico.  The Governor of New Mexico has worked hard to try to educate citizens that big inside meetings where people sit next to each other, often without face masks are “asking to spread the Corona Virus”.  Doctors and scientists say these types of gatherings can cause hundreds, even thousands of deaths in a community.  But someone has made it a "partisan political" issue...instead of thinking of compassion for their fellow man.

Yet, the preacher of the church was on TV saying in his Sunday sermon:  “We are protesting.  And the law says that American have the right to protest.!”

The manipulation of rhetoric or logic is reminiscent of my childhood days, when my parents took me to a Church of Christ on Sundays.  The church we went to thought that anyone who was not a member of that church was “going to hell”.  So we were brought up thinking that everyone else on earth was doomed to hell fire, if they weren’t members of the Church of Christ.  When I began to grow beyond that logic, as I travelled the world,  I recall trying to tell our preacher that it was foolish to judge everyone else on earth, over matters of opinion.  That God was the only one to do the judging.  It was like arguing with a zombie.

Mindless zombies, can be led to march or attack established society.  Hitler found a way to make a percentage of Germans his "Zombies" in the 1940's and

managed to start a world war.  Thousands died on the battlefield before Hitler's Zombies, were beat down and contained.  We must, as Americans see the trends and learn to educate, and bring up leaders to can keep our nation from being overwhelmed with radical and unhealthy mindsets. 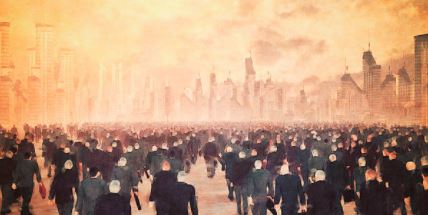 Example question #1: What if 100, or 1000 Zombies, carrying guns and bats and clubs marched on your town, or your neighborhood?  Or what it became socially acceptable, for example for people who are bigoted, to run up behind old people and body slam them to the concrete sidewalk...not to rob...just to demonstrate hatred.  This morning it was reported that 3000 to 6000 cases of senseless spontaneous attacks on elderly men and women have occurred coast to coast.  Someone has been preaching a system of hatred and bigotry, and too many young people are listening, and hurting, in some cases killing poor innocent old people, just because they are Chinese, or oriental, or of another race, or perhaps just because they are elderly.   They don't normally rob...they just knock them down on their faces to the hard concrete below.

Example question #2: When the American people, the Supreme Court, the Congress, the entire electoral system all say that “This man won the election!” and a defeated candidate still says that he won, along with his base of people who believe the lie, it is like “arguing with zombies.”  When the "Zombies attack our historical landmarks and vandalize it, looking for politicians to "hang" or to "kill",  our home grown zombies are out of hand, out of control.

Example question #3. When I see U.S. Congressmen and Senators, fighting and arguing with hateful rhetoric, against simple truths, it is like listening to Zombies. They can use smart, manipulate rhetoric, and they can be hateful in their attacks on simple truths. They speak without compassion or wisdom, and they diminish our democracy.

Example # 4. I was with a cousin, an educated and skilled medical nurse, who I have long admired. But when the subject of politics came up she became a zombie, she emerged and changed from a nice, fun happy person to a person of hate, vulgarity,  filled with threats like “I wanna shoot them if they try to take my guns!” or “We just need to eliminate them from America”.  The change was sudden, in one moment talk about the beauty of planting a garden, and the next moment, she believed in some kind of mindless revolution.  I used to think that she had been watching FOX or listening to Rush Limbaugh too much, but now believe she must be reading material from a deeper source, more insidious fringe group literature.

I think I now have begun to understand what Hillary Clinton once said at a private gathering of a few business campaign supporters.  She suggested that the rhetoric of some politicians seemed to appeal to a culture class of “deplorables”.   America saw "deplorables" in action when they attacked, sacked, and vandalized our U.S. Congress campus. Some cried out to "Kill Vice President Pence", or to "Find Nancy Pelosi".  But we now see that there is a  segment of the population that is armed, angry, hate filled and believes in a form of violence aimed in ways that if out of hand, could de-stabilize our government and create more division and hostility in America.  Can you argue with them using the facts of science?  No! Can you persuade them with comment sense?  How about using facts and logic?  No, it is like arguing with zombies.

We must be thankful for the millions, of Americans who make up a powerful, moderate majority. These are people who believe in our Constitution, our laws, courts and government.  These are the people that make up the heart and the "broad center" of Americans.  They are in that vast area, of the middle. Not radical right, not radical left.  They see "zombies" or "deplorables" for what they are, and this vast middle is made up of moderate Democrats, moderate Republicans and moderate Independents.  This is the stable "broad middle" of America culturally, socially, economically and they are the political stability of the United States. The also those who lead and largely dominate the middle class.  They are largely educated, good, stable people. 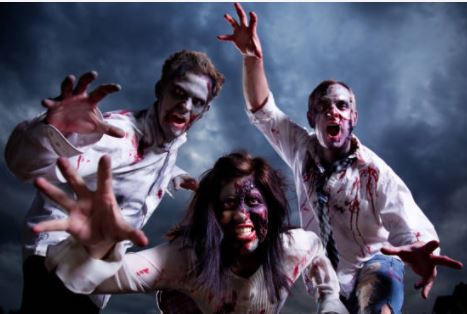 I had to drive to Indiana from New Mexico and didn’t want to fly, nor did I want to stay in motels, all because of concern of Corona Virus. So I drove my Winnebago RV.  In an RV park in Indiana, there was a man with a nice RV, and he had a tall flagpole with an American Flag and a partisan political Flag on it.  So I walked over, smiled and said: “Hey neighbor.  My name is Ben Boothe and I am a Democrat.”  He hesitantly shook my hand.  “I have had this idea. I have been wanting to climb that flagpole and take your political flag for a souvenir.”  He laughed and said: “Well buddy, you look a bit overweight, but if you think you can shinny up that flagpole, I will give you the flag.”  We both laughed and started talking.  We got along and decided that watching most politicians made good entertainment regardless of party.  Then he said: “I will just be glad when this conflict and violence is over. I am sick of it all!”  “I agree” I said.   Suddenly we found mutual ground.   I wondered what he thought about the radicals who attacked the Congress, and he said: "I am a Republican, but it disgusted me!"   I read one statistic that said 20% of the people changed political leanings when the "deplorables" attacked the U.S. Congress, at the urging on one radical politician.  That fellow with the "flag" said he was a Republican, but his candidate for President lost a lot of credibility that day of the "deplorable attack".  Guess what?  Together he and I found that "moderate middle".  We were both a part of it.  We became friends and still correspond. If he shows up in New Mexico I will cook him a Texas sized steak on the grill, and give him one of my flags!

It seems though that too many of our people, some elected,  are following the whims and the role of zombies, and trying to destroy anyone who has a different opinion on politics, or religion, ethnicity, economic level, educational level or a number of things.  That "zombie" psyche seems to be rooted in insecurity, anger, or some sense that they are no longer in control.  That may be true...a violent irrational angry or even armed and destructive group will never be a majority of Americans.  The "zombie" or "deplorables of our nation, often seem to be bent on destroying "others", and sometimes "one another".  Sometimes we elect people to our Congress, the House or Senate, who preach words of division and hate, rather than reaching out to work together as Americans.  We do not need to be electing Zombies. We need to be electing American patriots and people of wisdom, insight, knowledge and compassion.  Whether Republicans or Democrats they need to be rooted first as Americans, not partisans.

Blind divisive partisanship, can become a "zombie" group.   This photo of zombies above reminds me of some of our elected officials....uncompromising, hateful, stubborn, and unwilling to be Americans...they prefer to be hate filled partisans.

I recall those old Norman Rockwell images of Americans patriotic and respectful of our treasured symbols and our political system.  Two marvelous examples below.

Our credit to the patriot, Norman Rockwell, showing patriots maintaining the American Eagle on a flag pole or another honoring the "Liberty Bell" that our founding fathers fought for.  They were educated, brilliant thinkers who designed our democracy and republic, and encouraged us as Americans to love and honor our nation of democracy and honor.  The dark conflicts of deplorables in other lands were put aside by our system, based upon logic, honor, education, science and a system for and by the people.  I say, it is time to: MAKE AMERICA SMART AGAIN.

But all to often, recently, our nation has been filled with images of violence, or hate, or a desire to destroy one another, often led by ignorant, angry radicals.   The pictures contrast zombies with good hearted patriots.

How about you and I learn to stop arguing with zombies.  They don't want to listen, they want to destroy.  And what if your and I start raising up and supporting patriots instead of blustering radicals who like to brag about their guns as they show them off.  We as the voting public, whatever our part, we need to be thinking about electing educated, wise, thoughtful, compassionate leaders to our political offices.  Not partisan Zombies.