For the first time, Donald Trump has set another historic precedent. He is the only U.S. President to be impeached two times, while still President of the USA.  It happened today.

Only a week ago, the President made a speech to an assembly of right wing groups sometimes called the "Thugs with Guns" or "GWG" a loosely assembled group of people who have taken to carrying guns and swaggering around the country, showing vigilante style "macho" posturing for their "God", the Trump.  They travel and congregate around the USA, with intimidation tactics, which have ranged from surrounding and running cars and busses of of highways in Texas with pickup trucks waving Trump flags,  and other mischief.  They often consist of violent and vulgar white "muscle men" beating, stabbing, even shooting people in street protests. A look at some these people suggests you wouldn't want your family or children to see or hear them.  Not the brightest, or best cut of society by any means.  Just take a look at the quality of these people, who just ransacked our U.S. Congress:

A disgraceful event, when several of these roughnecks, dragged a capital guard to the ground, kicked and beat him, one with an American flag pole.  He was injured and hurt, as they kicked and walked over him., while he lay on the U.S. Capital steps in anguish.

These people were encouraged to march on the Congress, by Trump, because he didn't want the Congress to vote and officially certify the final election votes...a traditional ceremony that showed Biden won conclusively.

After the pep speech by Trump to "March on the U.S. Congress, I'll go with you" (he didn't, he quietly escaped to his office to safely watch the attack from his office in the White House). Trump demanded that they be strong, and "fight" for him (and secondly his country). Trump was  demanding strength and that they aggressively show their fight for their country. He has hinted that his "people would fight in the streets" in public speeches. This time he inspired them to break in, vandalize, some with guns, pipe bombs, knives, hand weapons, clubs.  It resulted in over 50 Capital Police and security guards injured, 5 people dead, and a emergency evacuation to hiding in the basement of the House of Representatives for hours.  Feces, blood and paint was smeared on statues and art work at the Congressional building.  Confederate flags, Texas flags and Trump flags were everywhere.  Offices were broken into, paperwork, files, furniture overturned, items stolen...just havoc.  Threats and calls to “Kill Pence” were heard.

But to it's credit, the politicians reconvened and held their meeting and vote to "recertify the election results", even when it took until 4:00 AM in the morning.  V.P. Mike Pence, stood high, front and center, in spite of insults and anger from Don Trump, trying to force Vice President Pence to break the Constitution and announce an invalidation of the election results.

A week later, after Nancy Pelosi's "house" had been so attacked, even vandalized, she again used her wily skills to reconvene the House of Representatives, and responded today with a record breaking speedy vote, to impeach President Trump, putting him in the history books as the only president to have been impeached two times, while still in office.

Pelosi, an experienced and skilled leader of Congressional ways, with a fair vote of the entire Congress, presided as Trump was impeached, because VP Pence would not use another method to get him out of office using he 25th Amendment.  Some military people fear Trump might initiate radical military actions on other nations.  Military leaders put out a letter that they would follow the "Constitution" to reassure the American people.   Most of the staff workers at the White House have stopped coming in, feeding rumors that the President is emotional and subject to wide mood swings.

Our brave elected officials have been determined not to let a mob or violent weapon carrying radicals be successful at insurrection.

DEFINITION OF INSURRECTION: "A VIOLENT UPRISING AGAINST AN AUTHORITY OF GOVERNMENT".

Pelosi pulled together a complicated gathering of Democrats and Republicans, and showed the world (and in those who wanted to stop our congress from it's constitutional workings), that the USA would still function, in spite of those radicals would not stop this nation from functioning.  We should be very thankful and grateful to our elected officials in the U.S. Congress, they did their patriotic duty. 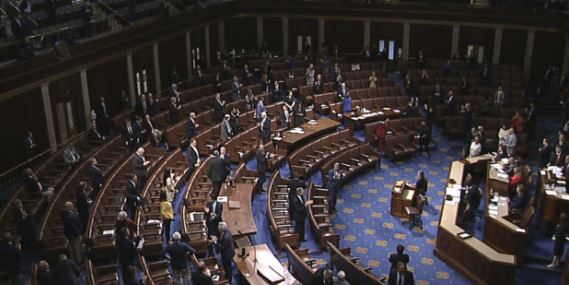 Now with an estimated 20,000 soldiers, streaming into Washington, DC the red necks and what we call the  "GWG" boys (or Cowboys without cows) are threatening to come back to DC for Joe Biden's inauguration, on January 20. Trump has said he "won't attend" and Mike Pence the VP and 4 other former U.S. Presidents will attend instead.  Biden said "I really don't care if Trump doesn't attend", due to his penchant for creating trouble.

But the red necks and GWG groups threaten to  attack court houses in 50 states, in another hopeful attempt to create national instability.  This time it may be more "blow than go", as they love to talk and bluster.  This time around the FBI is taking photos, names and descriptions and investigating hundreds for arrest.  We doubt that the GWG or Cowboys without guns, will be welcomed, or received in towns across the nation because they tend to create property damage and chaos.  Plus they are a public health problem. Most of them do not wear masks or socially distance.  Their yells and screaming tends to spread viral droplets.  The "macho" attitude suggests, most of them don't wear masks and tend to be a threat to further spread Corona Virus wherever they go.  Most Americans frankly do not identify with these bearded, tattooed, costumed fellows screaming out profanity, vandalizing public buildings, injuring local law enforcement officers, beating up citizens, and generally showing how "tough" they are.

All seems like a teenage mentality of troubled kids, now grown old, grey and often fat, after years of not "fitting in" to civilized society.   Look at the photos, (The FBI is arresting some from photos) and make your own conclusions. Some are ex veteran 'wanna BE's'  who feel energy when they can pretend to use their military training from years past...sadly the general public are injured, and in this case 5 dead, with 10 times that number seriously injured.

ON THE BRIGHT SIDE: In the meantime, the USA will move forward, bring in a new President.  Our nation, our people will seek to rebuild, repair,  create a land of "Americans, not partisan trouble makers".

We will rebuild this economy, fight the Corona Virus and create a new and better America for our kids and grandkids.   That is a reflection of true patriotism.

There is much to do in our nation, and many ways we can make it better.  I recall I was at a gathering with the great Jim Wright, who was Speaker of the House of Representatives, after the great Sam Rayburn, and LBJ who held that office.  He was an honored military veteran.

"Anyone can tear a beautiful building down.  But it takes, love, devotion and skill, to build something beautiful for the future."

He encouraged all of us as Americans, to strive everyday to build a better nation, better communities, better hopes to help families, American business, industry and new improved lives.

I am optimistic that by the third quarter of 2021, we will be in an early economic recovery and 2022 will be even better.  Lets be hopeful, positive and look for the thousands of ways we can move forward in positive ways.  This is a time for compassion as fellow Americans, not violent insurrection.