VIOLENT GROUPS DEMONSTRATE IN WASHINGTON DC.  STABBINGS AND RADICAL THREATS EXCHANGED BY THOSE WHO PREFER TO FORCE "THEIR TRUMP" TO WIN, IN SPITE OF MAJORITY OF VOTERS ELECTING JOE BIDEN.  We call for a new day of peace and progress in future years, as a nation of Americans...not street fighters.

These "fringe groups" seem to have a philosophy most unamerican, threatening, and almost illegal.  But this is what Trump has hinted at and threatened several times when he suggested that if he lost, "his people" would fight for him in the streets.  His people who seem to thing yelling, carrying guns, and intimidating people is an American way to peace, are out of touch with our peaceful mainstream in the United States.

Those injured and rushed to local hospitals during these demonstrations in DC seem to be examples of how some people wish to "press for violence" to get their way.

Sounds more like a third world dictatorship, than the United States of America, but that seems to be the level of these people and the philosophy of this "defeated" president.   Frankly, there are numerous radical groups, that have arisen in the USA. In the West, we call them, "Cowboys without a Cow" who have appeared at demonstrations or political events showing off their guns and are reminiscent of the old "Vigilantes" of the old west. Sadly in some cases they have shot people, and done more to create fear and violence than anything.   But when politicians such as Presidents or Senators seem to boost them, such as Lindsey Graham in the photo below, with a leader of the "Proud Boys" it tends to increase the realm of violence and social disruption. Here Senator Lindsey Graham (Republican) "Yucking it up with a leader of the Proud Boys"   The FBI and other agencies have reported that violent fringe groups, most of the right wing, have been responsible for most of the violent acts we have seen in the USA."  But, the defeated Trump is flailing, unwilling to publicly admit that the American people have rejected him by over 7,000,000 votes.  He and his family are about to lose the opportunity to make and raise millions at the expense of the poor people who were his "base" and who followed him like a deity. Only know, they are beginning to see his sad refusal to accept reality.  He has been rejected by a majority of the American people in a national election.

Makes one wonder about the quality and wisdom of some of the Senators and Presidents our nation has elected into office. Finally a few Republicans are jumping a sinking ship. As one article headlined in 2017, "We should never hesitate to call out hate!"   In the sprit of our America, we call and hope for a peaceful and healing time in the coming 2021 year, and ask all Americans coming together as one, instead of focusing on "fringe groups".  We need to not act as Republicans or Democrats, but as Americans, seeking the peace and prosperity that Americans deserve.  Let us leave the pain and conflict of Trump's "style" behind now as an instructive memory. 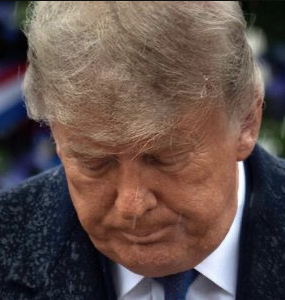