We Ben and Saneh Boothe, publishers of BootheGlobalPerspectives, congratulate Joe Biden and Kamala Harris on their victory, in the Presidential race!   The largest vote count in the history of the USA.  Biden said: "I will be the President for all Americans, not based upon political party.  It is time now to heal, and grow and deal with the many problems our nation faces, and to eliminate the conflicts that have grown in the USA."

With the vote of Pennsylvania Joe Biden won the electoral vote for U.S. President.  Immediately the New York Times, CNN, NBC, CBS, ABC called Biden the President Elect!.  After days of "up and down" vote counting, finally Biden won.  It is the second time, that Donald Trump lost the popular vote for President, a historic record.  Ben and Saneh Boothe, Publishers said: "All of us at Boothe Global Perspectives, (some 700,000 readers) offer  our warmest congratulations"  Senator Mitt Romney, the leaders of Germany, Canada, England, France all congratulated Joe Biden for this victory.  GOP Rep Fred Upton of Michigan won reelection and sent a letter to Joe Biden offering his congratulations and his support for "Bipartisan efforts in the future".   A breath of relief around the USA as people hope for a new beginning of peace and unified efforts to deal with the many challenges facing the United States. Former Presidents Obama, Bill Clinton, Jimmy Carter congratulated Biden.  Mary L. Trump said: "We did it!", Andrew Cuomo said: "After 230 years you shattered two ceilings!"  Senator Bernie Sanders  sent congrats and good will.  Almost all of the candidates who ran against Biden in the Democratic Primaries, sent their Congrats. Messages of good will came in from throughout the nation and the world.

Celebrations near the Trump Tower in New York city, the Trump Hotel in Washington DC, erupted with dancing in the streets, singing, flags and signs waving, in joy!

People gathered in the streets, all over town, even in front of a Trump hotel to celebrate Biden's victory!

A crowd gathered at St. John's Church, (below) across from the White House, where just months ago, Trump brought in armed soldiers shooting tear gas so that he could stand in front of the Church holding a Bible as a photo prop.  (He held the Bible upside down).  But today, crowds gathered happy and dancing in celebration that Biden won the presidential election.  The crowd was joyful jumping, clapping and singing. We cannot remember a Presidential election where people hit the streets to celebrate in mass like this.

There was so much joy, singing and dancing that it overwhelmed the few "Trump Voters" who wanted to pour "sour grapes" on the celebrations, but they were vastly outnumbered and ignored. Biden's supporters were too happy to "engage" in arguments or the yelling by the Trump flag wavers. 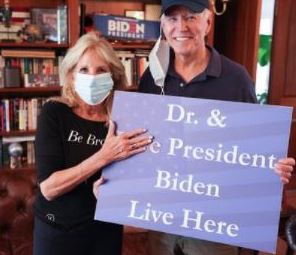 Donald Trump was seen out of town, playing golf (he has left town for golf over 80 times in the last year) and had no comment, nor did he show the normal courtesy of  congratulations to President Elect Biden.  As he drove back to the White House, a large crowd "Booed" his car and some said; "You are fired".   Reports of his "close advisers" said that Trump still didn't seem to absorb the fact that the voters have spoken...that Biden had won.  But to give Trump time to assimilate the facts.  In the meantime, vote counts that were continuing appeared to show that the level of the Biden win would even grow past the current electoral count, which already qualifies him as the "President Elect" and as the highest popular vote for a new president in history.    Congrats President Joe  (from Ben Boothe Sr.)