ELECTION DAY! LET IT BE A DAY OF JOY AND CELEBRATION OF AMERICA

My wife and I visited the small Indiana town of Pendleton recently. It is a quaint beautiful town, with a traditional Main Street, lovely store fronts and old banks. We found a coffee shop, a great place to watch the "local natives", come in, many still with mud speckled overalls, and a lot of young people with computers.  It had internet!  The town kept the charm of what seemed a century old architecture, walking sidewalks, and normal "folks".   100 years ago, and still today, this is farm country, productive and scenic.

Those days, 100 years ago, national elections were a time of excitement, national joy! Indeed, in recent years when we have voted, and had that little "I Voted" sticker, it was a season of joy.   Seems like this year, it has changed, and been a time of conflict, anger, violence, demonstrations, vandalism, and outright hostility.  Just yesterday, a Biden campaign bus, carrying several political VIP's, was accosted by 20 pick up trucks with Trump flags, who tried to run it off of the road. In other states, similar flag "gangs", blocked freeways, bridges, interstate highways, causing traffic delays for hours.

But in Pendleton, Indiana 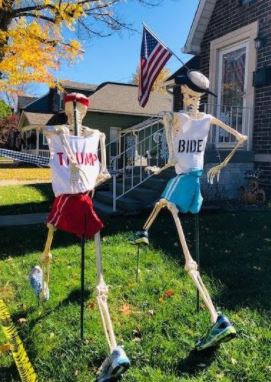 we saw a reminder of what many involved in political 'fever' have lost.  The joy of national elections.

It was two Halloween "skeletons" dressed in jogging outfits, running for the finish line. It made us laugh.  They appreciated the "joy" and the idea that this should be a happy time.

But that was tempered when nearby I saw an RV, with a flag pole waving Trump flags.  I walked over to the owner, and said: "I saw your flag. Tell me what you are thinking."  He shook my hand and said, "You a Democrat or Republican?"  I smiled and said: "I'm a Democrat and was kind of hoping the wind would blow your flag down, so I could have a souvenir".   He was disarmed by my humor and then said: "You know, I am so sick of this.  So much conflict, so much anger, and everyday, our politicians come out with another angry surprise.  I just want it to be over!"

I agreed.  "I suspect the entire nation is tired of all of the divisive surprises."

But then we talked ab0ut how it would be nice if all of the negatives could be washed away, and instead of being Republicans or Democrats we could just be fellow Americans.

"Make this election something positive. Don't let the negative voices drown out the joy of our most valued freedom as Americans. The right to vote!"  I said.

He invited me to Kentucky, "Come and see me when you are in my state. We'd love to have you!"

Think of this.  That little "I voted" sticker brings a smile, a pride, and a laugh as a proud American.

Give yourself the freedom to be happy, whatever the result of this election.  In the sprit of our nation, be graceful, a good sport, and rejoice that we live in a nation of order and good will.  Don't let a minority of extremists or angry bad sports destroy the joy of our nation. 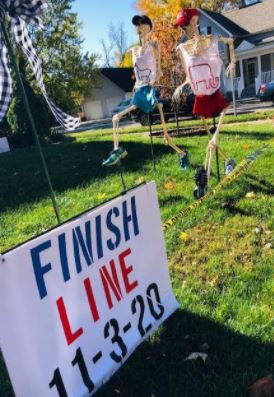 The finish line is upon us.  Vote my friend and afterward I will still shake your hand in friendship, because regardless of politics, we share the fact that we are both Americans first. Not Republicans or Democrats but Americans.  I have travelled the world over, circled the globe many times, and our nation is still my favorite of all!   By the way.  We voted early, and we will be eating popcorn and homemade chili as we watch this national miracle snug in our den...the miracle of a nation with freedom of speech and the right of peace, and the "pursuit of happiness".    Vote and then be a solid American first!