Boy and His Dog Found Together, Killed By Fire

This one got to me.  It does not diminish the loss and pain for the many others who have lost so much in the uncontrolled wildfires "out west", but I can just imagine that boy, trying to save his dog, and the dog trying to save "his boy".

Wyatte Tofte, 12, was found dead alongside his dog as wildfires swept through Oregon.  I can just imagine the two of them, running from the flames and staying beside each other, hoping to save each other, as the flames overtook them. Hugging as the flames burned them.

It is another tragedy of the worst weather in history of this area, first water issues,  lack of rain, then 113 degree heat, all of it combined with the Corona Pandemic, a society turned upside down closing down and trying to control the virus, plus the violence and conflicts of social "demonstrations", then enter the various "hate groups with guns",  people do "counter parades" creating more chances for conflict. Now we have a political election looming with veiled threats from politicians that "My people will fight for me", creating an atmosphere of more conflict that our nation has rarely...no never...seen like this.

CONFLICT AND DISASTERS ABOUND IN OUR BELOVED NATION....BUT WE ALSO HAVE A MAJORITY OF GOOD, GENEROUS AND KIND AMERICANS.

As I pat my little dog, who has been such a companion, during these difficult time, I shed a tear for this lovely 12 year old, Wyatte Tofte and his family.  His grandmother was found dead as well, not far away and they represent the love, lives lost in this difficult time. 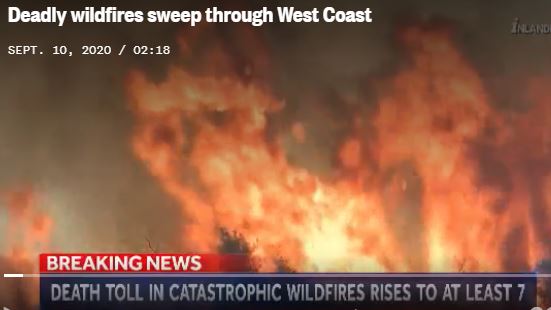 It also suggests a reminder that our people, "Red and Yellow, Black and White" need to put aside conflicts and grievances and pull together to help people in pain, to find positive solutions, to remember our Constitution and to be good citizens.   Our nation, our diverse groups, you and I are being tested.  Is the "Dream of America" at risk, because it seems that forces, multiple events and powers are taking place, chipping away at the beauty and strength of our nation.  We are told that even foreign powers, N. Korea, China, Russia and others are finding ways to divide us as a people through internet hacking planting ideas of division throughout out system, while they pretend to be simple Americans on the internet.  I have personally identified and exposed some of those, who almost always write from a perspective of the far right wing Americans, and sadly, many of our people read and quote them ad infinitum.

But I must go back to children.

Wyatte Totte, at 12 years old, with his beloved dog, they deserved a future, a life of opportunity and peace in America.

Their tragic death, and touching "loyalty" in their last moments together, should be a lesson for us as a people.

Perhaps this a time for true American patriots to put aside their bricks,  guns, fire bombs,  Red Hats, political conflicts,  angry signs,  flags waved not in joy and patriotism but in fiery anger, and hostile confrontive street scenes   We see a sector of our society, that have set out as angry thugs with guns, responding to other groups, and they take up arms.  Gandhi and Martin Luther King both said:  VIOLENCE BEGETS VIOLENCE      I say, "Destruction and vandalism multiplies a response of equal devastation".

So why not put aside all of the layers of social and political conflicts, and pull together on things we can help as a nation.  Instead of screaming in the streets, or doing "boat parades waving flags and pointing guns", how about we pull together, and save our fellow Americans in the path of fire, or flood, or hurricanes!   I am told that volunteer firefighters make $17 or more per hour.  How about volunteering or enrolling to help!  Our nation is being buffeted by wild weather.  At our house we had 70 mile per hour winds.  Hurricanes have blown and flooded parts of the southeast.  Record heat in Arizona, New Mexico, California.    How about we get back and focus on helping our fellow Americans survive and recover tangibly?   What if instead of 30,000 people parading or yelling in the streets, we had 30,000 unemployed and frustrated people,  volunteering to help with natural disasters.  Saving kids like Wyatte Tofte, giving them a future.  Holding our helping hands instead of throwing bricks, or shooting guns at crowds.

Friends, our nation is afire with emotions and strong opinions.  Remember, there are foreign influences, who want us to be angry and divided.  Some of our own leaders seem to use "conflict" as a political tool.  I am sympathetic at people injured or mad because of bigotry.  But I also think it odd, that as a nation many are expending so much energy demonstrating and yelling...when parts of our country desperately need healthy Americans to volunteer and help with the terrible natural disasters occurring in our nation.   "Black lives matter", then make them really matter by doing something tangibly helpful in these disastrous times where thousands of Americans, "Red and Yellow, Black and White" are losing their homes to fires, floods, wind, and natural disasters.  Then more people might really appreciate how much you matter.  Or the men who strut around holding guns, as natural vigilantes, how about take off the cowboy hats and put down the guns and pick up shovels to put out forest fires.  Now that WOULD be helpful.  As for the NAZI's and other sworn terrorists groups, try doing something really beneficial during this time of massive natural disasters, you might find it more satisfying than screaming bigoted chants.

It is time we think of this boy and his dog, and the love, loyalty and reason to get out act together as a UNITED states, and start stressing positives, love, charity and the higher ideals, those ideals that helped build this nation.

Yes, we have our share of bigotry, hate, thugs, evil destructive groups of angry violent people.  We have always had them, every nation does.  But, now it is time, for us, the great majority of Americans who work hard, send our kids to college, who keep our economy going, who create good schools, worship in good churches, to step up, and offer the calm, loving, wise leadership that our nation has let slip away from us.  We don't need to energize more violence, we need to step forward, and peacefully start a time of healing, recovery and growth.  We have important battles to fight, but they are battles of survival...from nature...from a global Pandemic, and we need to support each other to rebuild an economy that if we don't properly lead it, could fall into years of depression.    We need to evidence in our lives a simply loyalty and love that a boy and his dog demonstrate.  Love and loyalty, caring for one another.  We must renew our nation, where we can live together in calm, peace, love and productivity.

You my friend, and I matter.  All of us matter.  The church song said: "Red and yellow black and white, they are precious in his sight". Let us go the way of peace and positive "rebuilding", so that our kids and grandchildren are not lost in the flames of conflict, the fear of Pandemic, the hatred of angry people, the plots of foreign enemies,  the corruptible influence of greed and power mongers, reject the bigots and those who would rather kill, than build.  Reject those who prefer to burn, than YEARN for positive progress.

Think of a boy and his dog.......Cherish your loved ones.

Let's build on positives, not the deadly fires of anger and hate.