Benjamin Franklin was the first Postmaster General...he must be turning over in his grave. 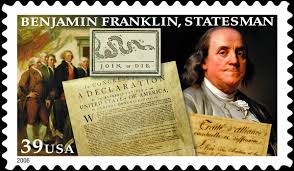 The Second Continental Congress appointed Benjamin Franklin the first postmaster general in 1775.  But it was an idea as old as Augustus Caesar (62 BCE-14 CE), who organized the service (cursus publicus) and his "service" workers were provided with light carriages (rhedae) pulled by fast horses.  Ancient Rome, realized that good communication, fast and free, would make a good nation a greater nation.

The idea of a national communication service to pull a nation together, promote commerce, and freely spread new and information was as popular to ancient Romans as it is to American citizens today.

When I was in high school, I wanted to buy a new Mustang,  to drive to college and so I found a job working at the Post Office located in downtown Fort Worth, right on the rail line.  My job was to come in, stand on a 2 ft high platform, that had bags for mail and parcels, hung all around it. Each bag went to a different city, often on a different train or truck.  The mail would be dumped in the center of the platform and my job was to redirect each box or package to the correct postal mail bag (thus to the correct train or truck).  Although we were taught to be careful if the boxes said "Fragile" some of us became pretty adept at practicing "basketball shots" and hitting "baggers", from 10 or 15 ft away.  I was a hard worker, doing extra courses in the day time, to get ahead in school, and working until midnight getting the mail sent out on the right train. I worked hard, and by the way, I bought and drove my new Mustang to college that year.

It was a good job, good pay for a kid and I worked hard at it. I was proud to be one of those "Neither rain nor snow...." guys determined to keep information and commerce going.  Of course we knew that many people depended upon those boxes of mail for medicines, supplies, food, clothes, tools, all those things people need to survive.

It saddens, alarms, concerns and angers me to see our President Trump, politicize something I thought was sacred, the U.S. Mail. I believe one of his motives sprouted in anger toward Amazon's founder, Jeff Bezos. Bezos owns the Washington Post which has consistently reported Trump's 20,000 + lies, and has led out some front page stories about Trump breaches of ethics.  So Trump, selected a right wing wealth supporter, to be the new "Postmaster General".  His name is Louis DeJoy, who has made a fortune investing in companies that do deliveries, some for the post office.  He has over $30,000,000 in XPO Logistics, a Postal Service contractor. He owned a large number of Amazon shares (one of the postal services most profitable delivery services).

This guy has so many conflicts of interest, it is hard to count them on, but he is there, courtesy of repayment of contributions to Trump, who has has pressured Amazon to pay higher postal rates to deliver goods through the Post Office.  Bezos replies, (we provide more profitable cash flow to the Post Office than any other customer).  The postmaster General owned a large stake in United Parcel Services, but quickly sold those when it became obvious that he would be investigated for conflicts of interest. But as head of the postal service he has made dozens of "supervisory changes" and created a form of chaos, at the postal service.  Reports that there are backlogs of mail stacked up, coast to coast, because the organization is in turmoil.  No doubt, Mr. Trump is pleased with the announcement that "If you vote by mail, your vote may not arrive until after the election deadline."  Just a poke in the eye to American voters, and all Americans who look forward to collecting their mail daily.

That simple stamp on an envelope sometimes delivers life and help to live.

LOOK AT THIS OLD STAMP WITH BENJAMIN FRANKLIN ON IT, WHEN 5 CENTS WOULD SEND A LETTER COAST TO COAST. 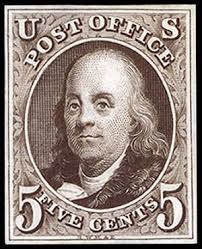 That postman who came to the door or mailbox regardless of snow, rain, ice, or blistering heat, when I was a kid, is in a different environment today. Because of poor government leadership, he is overwhelmed, underpaid, over worked, and seems expendable in the current political regime.  I overhead the president on TV  say: "Americans who vote by mail may never see their vote come in and be counted. It could delay the election results by days, weeks, months even years."   Trump would like that...and excuse to hang on in office even when American voters overwhelmingly dislike his methods and policies. Why, because most voters, studies say, who vote by mail, are older, established people, who tend to favor Democrats.  No one is sure about this, but Trump is sure.  Of course he has multiple motives, including anger at Amazon and Jeff Bezos, and a fear, behind in the polls that he must do everything to get elected, even if it means to bankrupt the post office, and punish all Americans and workers who depend upon it.

I somehow became 72.  It snuck up on me.  My wife recently had a heart attack and then suffered a stroke.  It would be hard for someone like me and my wife to stand in line at a voting location for hours, especially out in the open weather.  We would like to vote by mail, for health reasons.  Plus, we are like millions of Americans, because we count upon our daily delivery of mail. We count upon checks, medicines, hospital letters, and payment for services (I still do commercial appraisals).  We have already noticed that as hard as our local postman tries, mail service is slower.  A typical first class letter from Fort Worth/Dallas to Albuquerque used to arrive in 2 days.  Then it started taking 4 days.  Now we are counting 6 to 8 days.  Odd, when we mail it the other way, they tell us it only takes 3 or 4 days, and we still don't understand why the difference.  But our postal workers whisper that it gets stacked up in the central postal area where they sort the mail, where they are overworked and under staffed.

Hmmmm.  I have some experience in that department, from my experience working and earning enough to buy a new Mustang,  and wonder if they would like a grey haired consultant.

But the worst part of this "mail politicization" , in my opinion is that our President, is withholding the funds the post office needs to hire enough workers, to pay for overtime, and to do what any good business manager does, train and organize to do a more efficient job.  He doesn't seem to realize that the Post Office, starting with Ben Franklin, was never conceived as a money making scheme, it was a service to unite and hold our nation together.   Trump on the other-hand is starving the postal service down, for several personal reasons. He seems to publicly admit that he doesn't want Americans to vote by mail, in November.  His methods are another disgrace and probably a breach of the law, certainly a breach of ethics. But that doesn't to be anything new with this President does it.

He has repeatedly hired people to run departments, who wish to destroy the very services that those agencies were designed to perform.   In our commercial appraisal business BBAR Inc Appraisals , we mail out reports and get our pay by mail.  We (like millions of other citizens) feel the pain of President Trump's policies every day.

In the meantime, on the corner of our block, cars stop. There on the street, elderly retired people drive their cars to the postal box, waiting for the checks, legal papers, and important mail to be delivered.  The postal truck seems to arrive later, and take longer to deliver the mail every day.

Sometimes cars line up, when the postal truck arrives, waiting for him to deliver the mail. Sometimes, he skips a day, and then buries us with mail a day later.

Or worse, driving to mail a check to their mother, or college kid, or to pay an electric bill, and the postal collection box has been removed, by Trump's Post office political appointee. 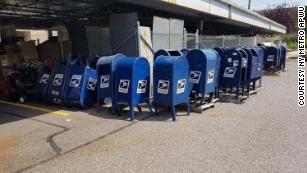 We documented in New York and other places, the post office has been removing PO boxes where people can mail their ballots. Here's photo proof!

This very personal service when Trump uses the postman, as a political tool, in hopes he can be re-elected or settle a feud with Jeff Bezos.

"Whether you are Republican or Democrat, rise up and demand a well funded, well staffed, and non political postal service."

The elected Republicans don't seem to have courage to stand up against Trump. We all need stand up for our postal service, before Trump ruins it, as he seems to corrupt everything the touches.