The US Space Program is Back, Thanks to Musk and NASA!

The US Space Program is back, cheers for Elon Musk and NASA!

I was in college, July 20, 1969 when two American astronauts landed on the moon, the first humans to walk on the lunar surface.  I was thrilled with John F. Kennedy's challenge to land Americans on the moon.  I watched breathlessly when our "First Step" on the moon was televised.

Then all those years of launches, sometimes, they stopped classes to show them in TV.   Now today, August 2, 2020, 51 years later,  our US Space program has started a new exciting program, this time with the help of a private American citizen who provided the imagination and often checkbook to start an entire new era of space goals and the most modern technology on earth.

In 1955- 1966, the USA had lagged behind Russia.  But then Kennedy put big government money, through NASA,  and pressed to make USA a world space leader.  The USA started late, far behind Russia and then step by step surpassed Russia and we felt so proud, that our engineers and scientists could do excellent things, better than anyone on earth.

Somewhere along the way, we seemed to become stale, then Elon Musk, an eccentric but creative man with a vision and deep pocketbooks who believed in solar power, and electric cars and "Space X" spaceships that could take off and land on land, and reused the space ships, hit the scene.  He has made old traditional auto manufacturers who dominated American industry seem like stale, slow companies with his revolutionary electric Tesla auto products.  His ideas on space leaped far ahead and he has been willing to put hundreds of millions, or more,  behind his idea to rebuild a new exciting type of space challenges.  And he continues to amaze us all, in that what he does, he does well.  Even making companies such as Boeing look "less" than what he can do. Musk has captured and ignited our imagination, something Americans, and the world needs after all of the conflicts and issues of leadership problems and conflicts in the last 3 years. With Corona, and racial conflicts, and political conflicts and a poor economy, we all have had need to "look up" and dream again.  Thank you Elon Musk!  I hope to buy one of your new revolutionary pick-ups that you will be building in Texas. My way to saying "Thanks" for stoking our imagination and vision.

Thanks for the energy and excitement of your vision and your dreams. We are pulling for you!  The 700,000 or so readers of BootheGlobalPerspectives will be following and reporting on your many projects and dreams.  We want you to succeed. 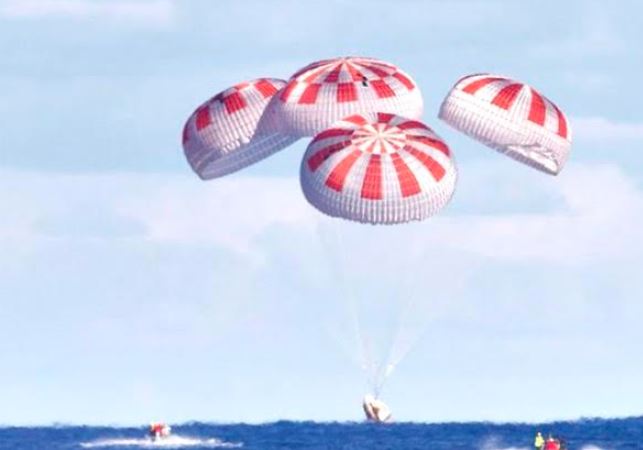 Today, I was glued to the TV to see Elon Musk's joint work with NASA, as the team put a new space ship, new technology, new faster computer systems, and a dream to hook up with a space station.  There NASA astronauts Bob Behnken and Doug Hurley flew the first "manned" Space X Dragon capsule, hooked up with the International Space Station, stayed there for two months and then flew back in the Space X unit,  making much of the equipment "reusable" saving millions, proving validity of the  "new ideas" and dreams of Elon Musk.

These are images of the ship, and the "return to earth", as well as the recovery of the space capsule.  I hardly breathed, while watching, and it was similar to watching the first "walk on the moon" over 50 years ago.

See the point of splash down, slowed from supersonic speeds through space, by 4 giant parachutes, as it came into the atmosphere of earth, and precisely to the targeted landing spot, right on schedule,  into the Gulf of Mexico. 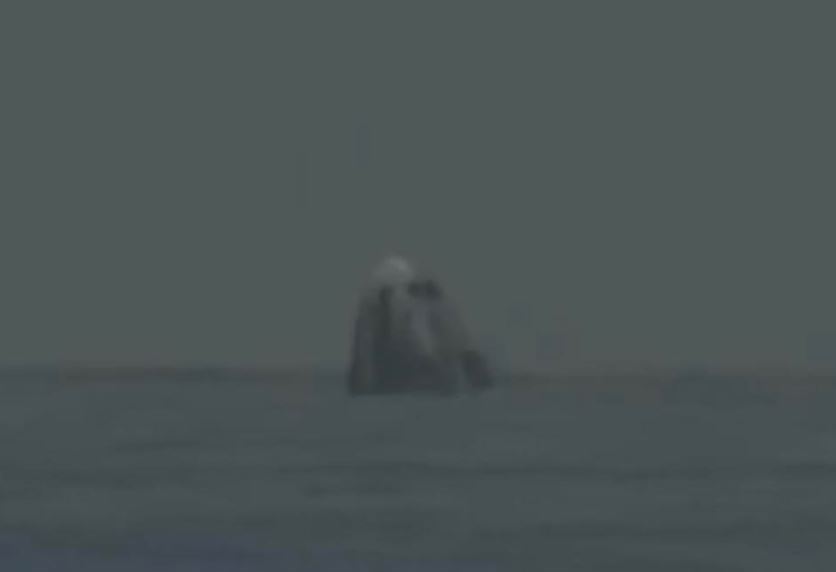 The capsule rocked in the ocean while boats came to check it out, and then slowly pulled it to the main recovery ship.

The only danger was some private boats came in close to the capsule before even official ships could get there and test for lethal toxic gasses and to be sure the capsule is secured and not leaking.

So the "recovery team" had to waste valuable time and energy chasing the boats away, one which was waving a ridiculous political sign, trying to barge in and get TV publicity.  I'll only let you guess which candidate would be so obnoxious.

But as the capsule was brought in, the door was not opened because there were dangerous accumulations of toxic gasses and a few moments was required to make it safe.  The professional team did a good job. 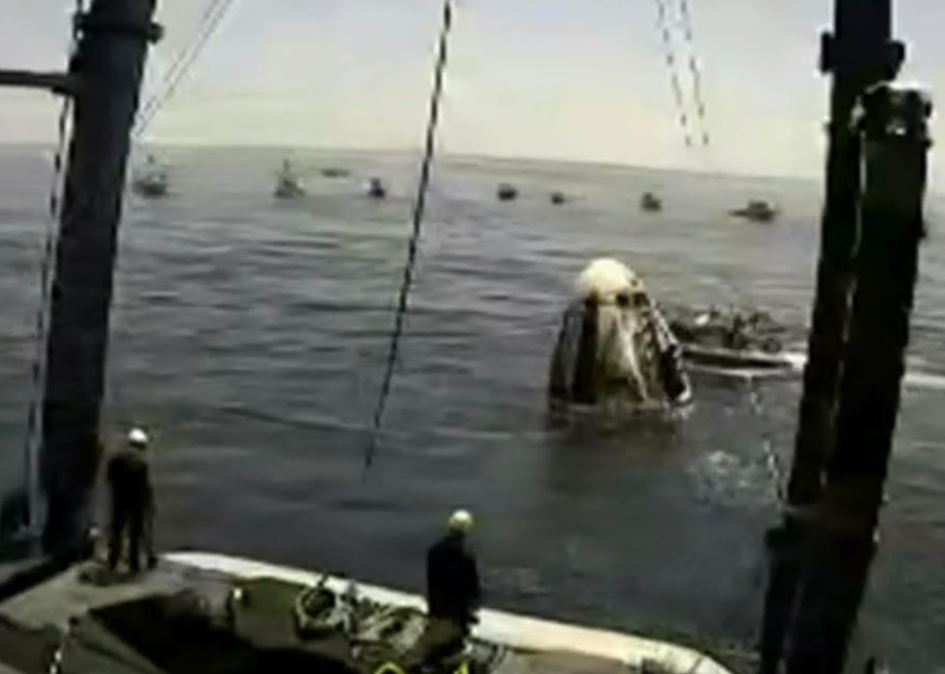 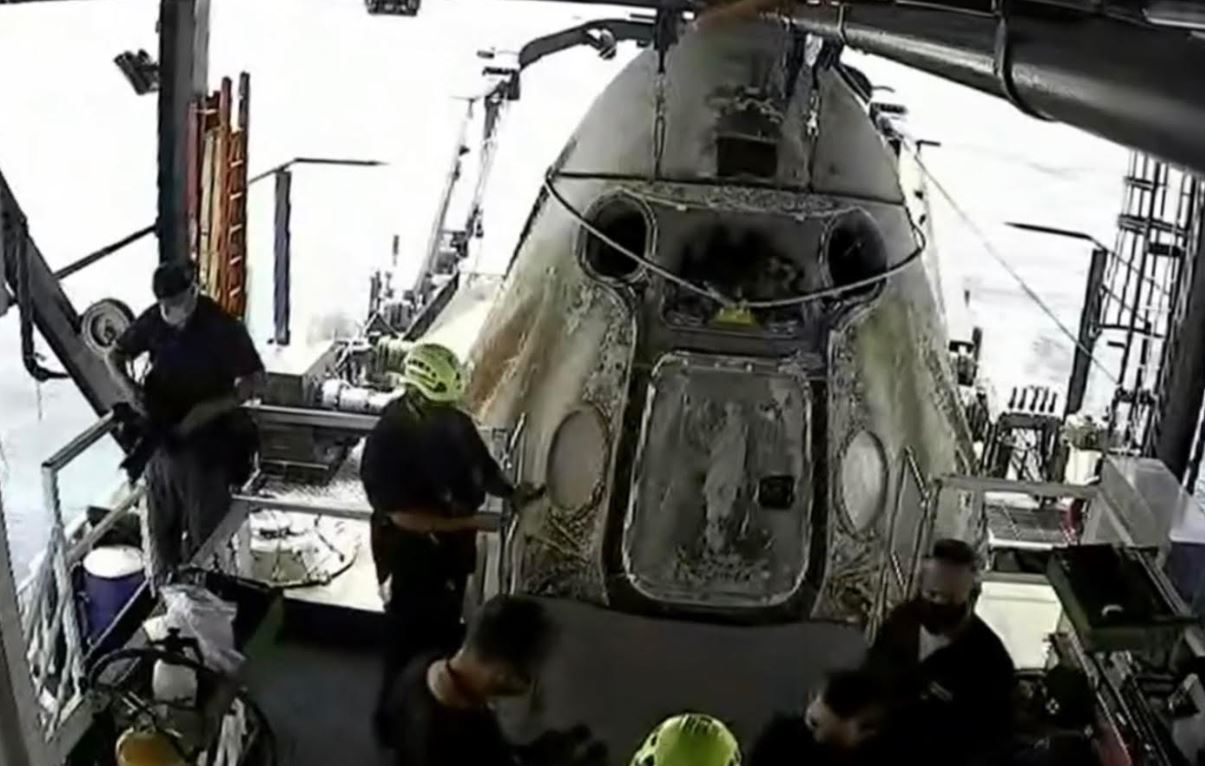 A bit of drama, because the capsule endured 3,500 degree temperatures, a lot of stress and the recovery team found toxic gas present and they took a while to lower the level of "bad gas" before opening the capsule door.  Houston control, the world, including people like me,  waited breathlessly until finally the Astronauts emerged, from a "long trip" and back. 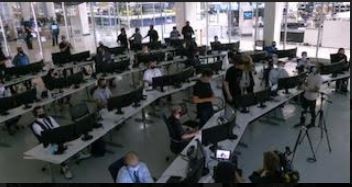 When the door opened and our men emerged, to the relief and joy, of everyone! Doug Hurley and Bob Behnken enjoyed the "brand new" design and technology of this new revolutionary unit, and the new standard for the future, for America's space program.  But they were still glad to get out and smell the ocean air and breath fresh "air" from home...earth.

A milestone for Elon Musk, for NASA, and for all Americans, and we follow Elon's dream to go to Mars.  I have learned not to doubt Elon Musk. He is a winner.