Who Invented the first Gramophone, or sound recording and playing instrument?

So who invented this, and when?

Actually none of the above.  But two out of three are close.

In the 1850"s in France, the Phonautograph  invented by Édouard-Léon Scott de Martinville,  was the first.  Later on Thomas Edison created an improved version and then later Alexander Graham Bell, used new and improved technology, upon which even later, Thomas Edison again refined it and got most of the credit.  No, Benjamin Franklin, was busy flying his kite and courting the ladies of France, his claim to fame was the Franklin Stove that he invented.

But in 1877 Edison's monumental discovery of the Phonograph enabled users to freely record and playback any sound, but his reliance on the tinfoil paper as an information storage medium was criticized for being ineffective, and very fragile.

Because of that, Alexander Graham Bell and his workers at Volta factory started experimenting, and came to conclusion that cylinder made out from wax could much withstand repeated use, perform better with recording and playback, have capacity for longer playback, and was easier to manufacture than the Edison tinfoil design.

Think, this crude instrument that first created a faint (non amplified in those days) distorted sound, was the beginning of the multi-billion dollar recording industry, impacted and helped create radio and later TV, and even today, as a result we enjoy high tech electronic music entertainment.  That old machine in the photo was part of the beginning.

On my recent birthday, my wife and daughter had a birthday party for me. Knowing my love for history, my gift was this replica of the 1901 version. That is the large brown photo of it. 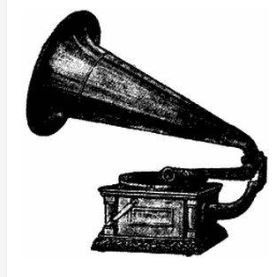 It is much like the original of 1901, seen here in black and white.

One could speak into the "horn" and record something, and then in amazement reverse the process and listen to the playback.

A number of small "listening and recording" places opened around the country, where people recorded and then listened to the recording.  Or they could listen to "pre recorded" messages from famous people.

Before long, people like Alexander Graham Bell, and Edison, (RCA), later General Electric, and companies like Westinghouse,  started creating high sound quality sound and figured out how to distribute and broadcast "music" over the radio waves.

Then the writing, creating and recording of songs and music turned into an industry.

As for me, I cannot sing, and musically can only pluck my guitar and banjo.  But, I can write, so my medium is writing. And even the internet, has been a beneficiary of the original ideas of those early inventors.  Today, I turned on my computer, put on some good music and by blue tooth sent it to my BOISE high quality sound speakers across the room and enjoyed 2 hours of quality music while handling business via computer and internet.

I am thankful to inventors like Edison and Bell. Tesla was there thinking about the potential for radio and broadcasting. Remember, it was Tesla who created "FM" signals, and brought forth a better quality of sound.  Think how important music is to us. Especially during times of elation, loss, tragedy or stress.

With Corona, Recession, Political Division, Racial Protests, plus international friction with China, N. Korea, Iran, Russia, even watching the evening news can be stressful.  We all need a bit of music to soothe, inspire or bring joy to our spirits.    So, if you come by my office, between the commercial appraisals we do, or the environmental reports and studies, or feasibility studies, we put out at my company: www.benboothe.com, we may crank up some music. Some great old classical sounds, some folk music, some country western, perhaps some Elvis, or modern rock and roll.  And when you begin to tap your toe, we may provide you with some good quality liquid refreshment.

Then you can relax and smile as you ponder how this technology has improved our lives.