What is Antifa? What do scholars say that they stand for?

A good friend, called me and started telling me about the dangers of Antifa, that they might be dangerous terrorists.  So I tried to study and find out what this "Antifa" group is.   One of the nation’s experts on Antifa, is Stanilav Vysotsky, a professor at University of Wisconsin, and an author of sociological books, one to be released soon on Antifa.   He is a "go to" expert on Antifa.

This is the symbol Nazi Germany gave to Antifa and to the Freemasons during Hitler's reign.  The Nazi's saw that the teachings of Antifa and Freemasons were both opposed to Fascism. Fascist nations which wanted to rule by military power, along a "right wing" agenda, "needed Antifa to balance the right wing agendas to more moderate beliefs".  That was Antifa's goal.   In my research it appears that it still has that central goal.  To offset extreme right wing, Fascists,  (radical and military style governance).

Professor Vysotsky said in an interview “Antifa is not a terrorist group.  Right wing political groups are seeking to discredit their political opposition so label them as terrorists."  We researched and found few if any valid and confirmed records of a killing, a burning, or violence committed by Antifa in the USA, but right wing groups, that often are armed and physically violent often accuse Antifa of violence. We wonder if the accusations are often efforts to "shift blame" from right wing or other extremists from themselves to Antifa.  We simply go by what hard evidence has to offer, and we did not find a tendency to violence in Antifa.

But Professor Vysotsky does state that Antifa, does oppose “Fascism, or violent measures to gain political power” and they have identified some policies of the Trump Administration as leaning toward authoritarian violence to achieve political goals. Trump himself has told the Governors of the USA, “If you can’t contain the violence on the streets, I will call out the Army and handle it.”  Those words violate several layers of U.S. Law,  they reflect a dangerous attitude coming from a President of a democracy.

Antifa was founded as an "Anti-Nazi" organization, in Germany, because they believed that few stood up to Hitler's goons and "right wing" street fighters.    They had been considered friends (over the past 30 years) of Freemasons, because Freemasons shun tyrants, fascists and other evil radicals. 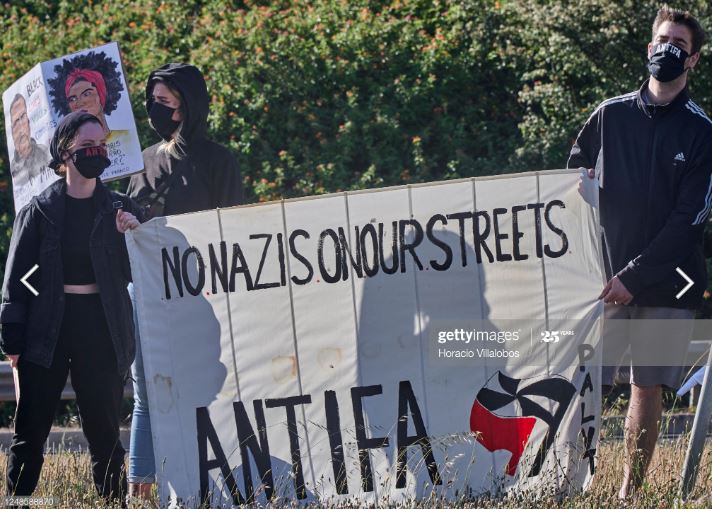 The main target of Antifa, is stated and in its formation goals, has been fascists.  "Anti - Fa"  literally means "anti-fascist".

Most Americans like myself may need to refresh our memory on the meaning of Fascism.

Fascism is defined as: "Extreme right-wing authoritarian, or intolerant views or practice."  Nazis in Germany and Franco in Spain were Fascists.

1.  Supremacy of one ethnic group

3. Obedience to a strong demagogic approach.   It is the opposite of  Democracy.  Fascism is by the dictionary (Wikipedia) "Dictatorial power, forcible suppression of opposition or elimination of those with different opinions"

Dictionary definitions say that fascists believe in a:

"One party state, often led by a dictator and martial (military type) government."

Dictatorship, military control, martial law, persecution of those with different opinions. That what Antifa is opposed to.

So when the "Neo Nazis" or "Thugs with guns", or "CWAC" shows up, Antifa tries to put forth a different message to encourage them not to be so far to the right.

Apparently, they see the gun carrying "militias" that come to Trump rallies, as there to intimidate or control any opposition to right wing politics.  In doing so, radical groups (especial those with weapons in hand)  tend make conflict more likely.

Consider some recent groups in America, which have been armed and violent:

1. Boogaloo Bois:  We will call them small bands of men who wear military paraphernalia, carry AR-15 style military weapons, and act like a vigilante group.  Politically they lean to the right wing.

2. Proud Boys:  “Proud to be an American” with a similar philosophy as the Boogaloo Bois. Armed and "ready".

(We have read that some of these people physically threaten people or beat audience members who held up signs opposing Trump).

3. Neo Nazis:  This group studies WWII NAZI tactics and seems to worship NAZI methods, even wear old Nazi style outfits with Nazi flags and symbols. They seem to hate Jews more than anyone, but don't have a love for black people. The Neo Nazis are a far right wing bunch and don't mind fighting or vandalism to make a point.  In public image some of them have been described as of unsightly image.

4. Skin Heads:  They look and seem like menacing people but seem to have less prominence in recent years. Also seem ok with violence and vandalism.  Public image is often unsightly.

5. CWAC:  I call them “Cowboys without a cow”.  These consider themselves “good ole boys" , who wear blue jeans, cowboy hats, boots, and AR 15 military rifles and sometimes call themselves a self-appointed civilian militia. They just appear at protests as vigilantes & try to take a commanding role in law enforcement with no legal authority. Politically they tend to the right wing side of the spectrum. They proudly like to walk around with guns, cowboy hats and a tough boy attitude

Then Antifa:  Chartered to tend to offset Fascism, and right wing radicals.  Overall tendency has been to try to use "moral persuasion", although conversations with some right wing groups, by nature can become heated.

Antifa confronts the (CWAC) Cowboys without a cow, who are often “good ole boys” who seem to enjoy the "Cowboy image",  but most are without a cow, but they do have guns) and Antifa tries to suggest that they behave, and restrain themselves from generating violence.  Antifa reminds them that they have no legal authority and that bringing guns to public gatherings is often a dangerous thing.  Often called vigilantes.  They, (CWAC, indeed none of these groups have legal authority to dictate the law.)

It was one of those CWAC (Cowboys without a cow)  who shot someone at a demonstration in Albuquerque recently. The CWAC (Cowboys without a cow), didn't want the statue of the Conquistador who cut off the feet of Indians at Acoma, in year 1540 to be removed. The conquistador from Spain apparently was a rough and cruel man.  Indians and Hispanic people, of modern day Albuquerque wanted the statue removed thinking it suggested domination by White Anglo Saxons from Europe. They were inspired by the statue topplings of black protesters.  Antifa wasn't present in New Mexico when this statue was the center of a protest.  But the CWAC,  Cowboys without a cow (guns but no cows) were there and thus the shooting of a person there.   Finally, the police came and arrested the shooter and some of the "Cowboys with guns" amid a declaration from the Mayor and the Governor that "We don't want armed civilians coming to public demonstrations".    Sort of makes sense. Do not carry guns and act like a Wild West cowboy at an emotional political event.

So, before researching for this article, I didn't know anything about Antifa ("anti-fascist").  I know 99% of our readers are not  fascists, and neither am I, so I don't think that Antifa will be bothering most people. My research indicates that Antifa does not seem to pose a threat to America, but does try to get right wing radicals, and fascists, to moderate their views.   But, for some reason the right wing media has come out and said that Antifa are terrorists.  Trump true to form seems to have followed their lead, as coming from FOX news and similar leaning institutions. .  That may be because so many right wing radical self-anointed  armed militias have been coming to the Trump events...using guns to intimidate anyone opposed to the President. People see those people with guns with a "paramilitary" presence and then someone uses the word "Antifa" and mistakenly thinks they are the problem.  The problem seems to be right wing vigilantes, not a group that is opposed to Fascism.  Some people for political reasons, rely upon the "loudest" people.  Sadly a group aiming for more "reason" such an Antifa, is being "spun" as a terrorist group.  It all sounds pretty spooky to me, and more like Nazi Germany than the United States of America.

Anyway, thanks to the right wing media for bringing Antifa up, trying to blame violence or vandalism on them, when the violence seems to be coming from within the ranks of demonstrators, or from self-appointed vigilantes, right wing activists, and people worked up into a frenzy,  who seem to create more chaos, to create division and anarchy.

We do not know how much impact the right wing media voices have to do with pointing the fingers, or blaming one group or another.  I tried listening to Rush and Fox News.  Their reports are inconsistent and lean toward right wing authoritarianism and more “military” type rule. But they seem to be so far to the right of most Americans, I don’t find them helpful or with positive solutions.

But there are many incidents where local gun toting militias, SWAC (Cowboys without a cow, who come wearing guns and gear) have been involved in conflicts, fights and even a few shootings. Some have died as a result of their actions.  The police don't know what to do with them. They are in the same category as Boogaloo Bois, Proud Boys, Skin Heads.  Lower on the chart are the Neo Nazi groups that seem to be a throwback to the worship of Hitler's NAZI days.

As for me, I prefer not to have anything to do with extremist groups.  They don’t seem to offer peaceful, positive solutions.  I would prefer that they join the armed services, or police forces, at least they would have some supervision, training and would be under some "legal" control (we would hope).

I do not believe that killers, anarchists, Nazis, extremist right wing politicians, or radicals of any wing represent the highest and best values of our beloved United States.  I do not think they are loyal to our Constitution.  It appears that they often have been influenced by politicized media and propaganda. 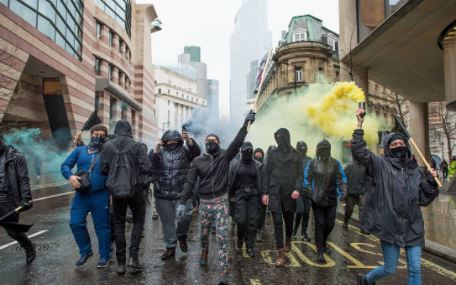 Division and conflict can destroy a democracy. We saw it happen in Germany,  Italy, and dozens of lesser nations. Iraq, Syria, Venezuela, Iran and a host of Middle Eastern hot spots show that “tribalism” and militant groups simply cause strive and suffering.  Brazil, Iran, North Korea, Saudi Arabia, Russia and Turkey reflect the "authoritarian" and sometimes dictatorial style of leadership, and often they use military or police force to attack political opponents.

No self-appointed armed group of political division,  is worth the separation or targeting of friends, loved ones and wise political leaders.  No such group should use power, vandalism, destruction, arson, to disrupt peace. No diverse political opinion is worth losing even one life,  good friend or patriotic citizen of America.   I find it interesting that the NAZIS considered Antifa and Freemasons a threat because of similar opposition to fascism and tyranny.

I oppose tyranny too, don't you?  That is why I love America, our United States.  I believe in Democracy, the freedom of speech, free and open elections. No doubt the vast majority of the "silent majority" of Americans loves our Democratic style of government and personal freedom.

I believe most Americans believe that we should have open choices of religion and politics and not be "bullied" by extremists or people controlled by violent ideas.

A group of Antifa members demonstrating in this photo. Notice, no guns or weapons. They are speaking out against Fascism.  Considering what we have been seeing in the United States lately, they seem pretty peaceful.

Feel free to reprint this to anyone who brings up Antifa...perhaps a little education might help clear the air. Send your friends to our site, it is free reading: www.bootheglobalperspectives.com