AVERAGE GOVERNMENT SAVINGS WHEN OLD PEOPLE IN THE USA DIE

(Is someone hoping to help balance a budget on Deaths of Seniors,  God forbid!)

Our thanks for Dan Jankowski, and expert in math, statistics and numerical applications for his research and input. He has also done some higher math models but for the sake of space and efficiency we have not published them here.

Average government spending on the elderly in the USA.

Federal spending on old and young, by the numbers - PolitiFact

We have seen several estimates of how many deaths are senior citizens ranging from 30% of all deaths are over 65, to the most quoted 80%, so for this article we will use the 80% because it has been quoted most. This normally is quoted when news reports indicate the huge death toll of “Senior Citizens” in nursing homes or ‘old folks homes’.

Now estimating for every 100,000 deaths, and using national agency statements that 80% of deaths are those most vulnerable, who are 65 years old or older, or who have other health conditions (obesity, diabetes, high blood pressure) calculates that 80,000 deaths of seniors x $30,044 =

2.403,520,000 (2.4 Billion dollars). That is how much money the federal geniuses might calculate that they would save, with prompt “Senior deaths”.

What if the US death toll reaches 200,000 souls? 80% seniors would calculate 160,000 of our grandparents dying. To coldly put it in economic terms for Trump’s confidential “hypothetical” planning would be $4.8 Billion saved on medical care and social security and other government savings if our grandparents or parents promptly die and are taken from us quickly.

So much for the phrase, the concept of  “social security” in America.

I do not even wish to project the numbers if a second wave hits and the number rises to 300,000 deaths (240,000 seniors). The numbers are staggering $7.21 Billion saved during the Trump Administration if that many “Seniors die”.  Give or take a billion or two, depending upon the estimates of death, whatever the number it seems to us, to be a tragedy of historic measure. These my friends are sad numbers that we highly suspect the Washington DC Trump economists quietly see. Of course they will deny this, and swear on their rarely used Bibles, but…what do you think?  Thus, to them early “re-openings”, downplaying the dangers, foot dragging on more tests, bragging that the USA has ‘won the battle’ against the Corona Pandemic, and lowering stringent standards for public safety, result in added deaths are a financial bonanza for “Trump’s Record”. How? 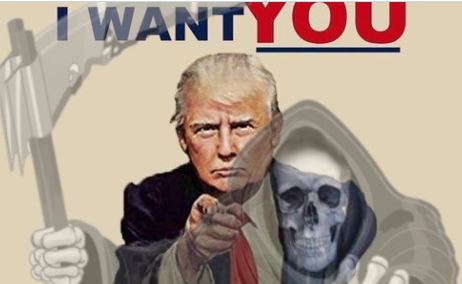 THE EQUATION OF DEATH:

We ( Dan Jankowski,  mathematician and statistical studies and Ben Boothe Sr (appraiser and environmental consultant) hate to even imagine that D.C. bunch in "Foggy Bottom", those economists who put savings, profits and wealth above human lives, represents an “Equation of Death” , vs "Economic studies that consider prosperity more important than human life) to help finance future budget needs, such as gifts and tax benefits for giant corporations, in the USA.  The way things are going, we rather doubt that poor, unemployed, ordinary Americans will benefit from savings of the deaths of some in our culture.  At best, we are guessing that the oldest, poorest,  most in need will get the “smallest cut” of the pie.  In 1929 when Hoover failed to help the "little people, small business, and 'Main Street" owners, it took Roosevelt to actually put in place policies to help those most in need.  And even at that it took over a decade to see a real economic recovery.

Herbert Hoover made the same mistake in the great depression, of 1929 and it was not until years later, that Franklin Roosevelt, under great pressure from millions of businessmen and every day Americans, came in and brought social programs to save the average American, that the “Great Depression” finally started to heal.  But that entailed years of “Hoover” doing little for Middle and Lower Class Americans.

Sadly our most vulnerable seniors, are paying the highest price, for current Trump government policies and wrong headed directions for the USA.