Fracking Trends: Boom in Decline? You heard it first from Boothe Global Perspectives

Forbes, The Wall Street Journal and a host of other business publications are reporting declines or problems with fracking and drilling in shale for oil and gas.

Many observe that oil rigs are going idle in West Texas and Southeast New Mexico these days.

We first reported economic trends some time ago in BOOTHEGLOBALPERSPECTIVES. Our sister company, Appraisals for Banks and Investors, informed bankers and investors about trends and data to give them a "heads up" on what was happening in the Permian Basin. Some bankers and investors who didn't appreciate the extensive trend pages, may now value our early observations on potential risk factors. Some other appraisers didn't provide "trend analyses" as we did, and invariably their reports may have missed something.

The new technology and results of fracking have vastly increased the volume of new wells and drilling. And as we have reported several times in the past, the first 90-180 days of production from newly fracked wells is very high.

But with time, the yield decreases rapidly, and many wells that were represented to banks and investors as having a 20-year life have dropped to a trickle in production over five-year spans.

1. We first saw this a decade ago with Barnett Shale in Fort Worth. With more than 1,400 wells, this pattern was observed and reported by Boothe Global Perspectives.

3. We did appraisals in North Dakota and observed identical patterns in fracking and shale projects.

4. We appraised oil and gas booms in Oklahoma, and in our appraisal experience there we saw "mini booms" but rapid declines.

5. Now, we see that, with the "boom" in new drilling and production of the Permian Basin in West Texas and SE New Mexico, it  is happening again. Early "bonus" production and hopes for 20-year wells of high production are evaporating with rapid declines in year 2, 3, 4, and 5 of the life of the well. After 5 years, many of these wells may not be producing enough to keep operating. Refracting -- repetitive, high-pressure water fracking -- sometimes helps, but the results are often similar and often at some point do not justify the expense after a few years.

There are two approaches that many oil drillers are taking. Well, sometimes three.

1. Drill even more new wells to get the "gusher" of new and early production. This boosts short-term financial statements.

2. Slow down drilling and cut expenses, do long term, repeat high-pressure water fracking and reduce staff and rigs and just go with the declining production.

3. Cut losses and pull out of new wells, new risk and new expenses. Typically the smaller operators are at highest risk and have less staying power.

In Texas towns such as Midland and Odessa and in Hobbs, New Mexico and Carlsbad, New Mexico, we are seeing investors quietly pulling back. We have had bankers in these towns tell us that they no longer want to lend on new hotel properties or new housing projects. We notice a 360-unit mobile home/RV park established primarily for oil and gas well production workers in one "Permian city" now for sale.  Investors who have enjoyed the boom of the past few years are quietly trying to liquidate investments. Hotels that were booked in advance at top rates suddenly are showing less demand.

Bankers are getting nervous and "tighter," or more conservative in lending practices. 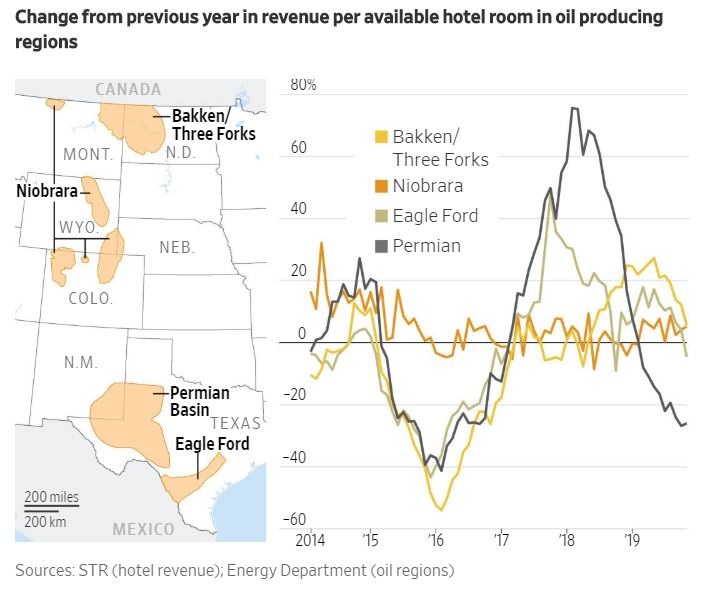 Notice that the Permian had the highest "boom peaks" and the most rapid decline in hotel revenue numbers.

Some of the small towns that have experienced high traffic and increased demand for public spending for roads, new utility lines and greater law enforcement resources are seeing the "blessings" of a boom that many old timers complained about, changing. They may now be facing lower traffic and less demand for growth and expansion, and many retailers and business people are seeing income change, often for the worst.

Homer Daniel has an oil field equipment company in the Midland area, but he has now started a hiring freeze. Why?  The decline, Mr. Daniel says, "affects everybody's bottom lines."

"THE BOOM TIME IS DONE AT THIS POINT UNLESS OIL PRICES INCREASE," said Michael Plante, Sr., an economist at the Federal Reserve Bank of Dallas. Note the following chart showing investment trend declines in 2018 and then more substantial in 2019.

We are seeing a tight business atmosphere. The Wall Street Journal reported that in Hobbs, N.M., Shiloh Machine reported that oil field customers that once paid in 60 days now are paying in 90 or 100 days.  "There is a cash crunch," said Mr. Mattingly, who is with Shiloh Machine.

We now see that the US oil rig numbers have dropped, putting the total number of rigs in the Permian under 700 for the first time in nearly four years.

US exploration and production companies (E&P) are showing 35 percent declines in share prices over the last year, and small independent companies have drops of more than 60 percent.

Shale isn't the only thing that we are watching. There are several major new oil and gas fields that will be opening up and starting huge new production in Ghana, Canada, the North Sea and other places. This new production added to the world oil and gas market may create downward pressure on international prices for oil. This could have a further market impact and discourage new investment and drilling in the Permian. Many shale producers in Texas and New Mexico report that they break even if oil prices are in the mid $50s.  So while WTI prices in the $55-65 range, many companies were able to generate cash flow and reserves. But the word in the oil patch is that everyone is being more conservative in spending. Of course, every oil and gas man, every economic development leader and every banker in the Permian Basin would like to see oil prices in a range of $65-80 a barrel.

We will stay on top of the markets and report back to you. We are delighted to speak to groups or do financial evaluations and appraisals. Values of properties are still high, and values in the Permian Basin are still above levels in 2016 and 2017. Current higher property values determined through appraisal may be helpful for many investors and lenders. Give us a call if you have a group who might enjoy our presentations or if you need appraisals or environmental studies. We are always supportive of good business and good businessmen who do so much for jobs and our economy.