Our credit and thanks to CNN for posting these photos and story on the internet. 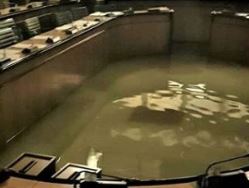 I LOVE VENICE  ...but lately...climate change!

Venice is experiencing the worst flooding in decades as water levels increase and the city sinks. So just as its Regional Council argued and rejected a move to address problems of climate change, the room began to flood, and flood some more. Now the room is, well, see the photos. Some politicians refuse to see the forest for the trees. Or the trees for the forest.

Alas, truth and fact, ideology has overwhelmed fact and truth. Seems like the partisans of extreme politics and disorder have overwhelmed the citizens of order and logic.

Don't get us wrong, we are not fanatics of the environment, but we also listen to reality. We think good environmental planning is good business, and smart businesses should take this matter of climate change into consideration. Our family has owned agricultural properties in Texas and New Mexico over the past 80 years, and we see the changes in agricultural crops because of droughts in West Texas, and we speak to ranchers in New Mexico who tell us of streams and lakes drying up. Reality vs political ideology. When those snow-covered peaks of the Sangre De Christo mountains no longer have snow because of lack of precipitation, the streams and rivers below tend to dry up with spring and summer melts. Snow is the "bank" for rivers of the summer. Farmers and ranchers know this, they are seeing it daily.

In the USA, consider these "facts:"

1. When your cattle run out of water

2. When your cities and farmers say the underground aquifers are drying up

3. When over 1,000 lakes and streams  between Texas and California have dried up

4. When record numbers of  forests are burning

5. When cities gasping for new water supplies to support their population are worried

6. When the worst hurricanes in history are hitting our shores

When??? Think reality, my friends. Climate change is real, and it is beginning to hurt the world economically.

So if you love to shop in Venice for, say, Murano jewelry or hand-blown glass, you might want to consider taking a boat to the Island of Murano, just a seven-minute ride from Venice out in the bay. There they live on an island and don't need to ignore the facts. I love this place, and my mom still wears jewelry that I brought back from Venice and Murano. Now more than ever, it's best to have a boat handy if you want to shop there today.

Oh the irony of the "Majority League, Brothers of Italy, and Forza Italia" rejecting amendments to address issues of climate change. They of all people would benefit from increased tourism, one would think. But alas, they must not believe in climate change as their shoes fill up with rising water.

Sometimes the wealthy and the powerful are the last to see the light of reality.

We are always encouraged when we see cities such as Miami and New Orleans begin to take climate change seriously and do serious planning for the future.

How about it Houston? Even early Texans suggested that it was a bit "low and swampy," and that is why they moved the capital to Austin. Just how many flood plain areas are you willing to rebuild in? Perhaps consider the Island of Murano as an example. More boats. Treat your neighborhood as an island. Put your houses on stilts.

Just kidding, Houston is a great city. We notice that federal regulations requiring people who have been flooded to rebuild with surveys to increase the elevation of their homes were eliminated by our wise leaders of the Trump Administration just a few months before the big hurricane hit. In other words, you can still get federal flood insurance if you rebuild your house in a flood zone. If your house is flooded  again, the federal flood insurance, paid for by taxpayers, will bail you out again. Wow, again.

Look guys. There is a forest there, you are just blocked by seeing the trees.  Or Visa Versa.