FARMING TRENDS ARE SIGNIFICANT TO OUR ECONOMY and the American people.  Every farmer should read this. You have our permission to copy and send it out.

Agriculture is a huge business in the USA, billions and billions of dollars.  Thus trends in agriculture are important to watch.

I visited one of the largest dairy product marketing associations in the country several years ago during a particularly stressful period for dairy products. I was amazed when the representative told me, "We have expanded our hotline for dairy farmers because so many are troubled by the dairy farm economy."  Now here we are, years later in 2019, and we see that general farming is experiencing profit declines as profit margin narrow. Many farmers are again under stress, some looking for answers or solutions. As profit margins decrease, equipment costs increase, labor costs rise this is a critical time.  I spoke at a recent meeting of investors in New Mexico just two weeks ago, and a comment from one farm owner was:

"Many of us farmers are projecting a loss if we plant today. It is not very motivating to see a business plan to spend $50,000 to $150,000 to plant, cultivate, spray for weeds, put in fertilizer, pay for harvest, pay interest and bank loans only to project a substantial loss nine months of hard work later."

We at Boothe Global Perspectives see critical challenges for farming and farmers in the USA.  And this may just be the beginning of hardship unless significant changes occur.  We have found that even in difficult cycles, some farmers still prosper and excel.

* Markets for U.S. production of some crops have dropped in price substantially.

* Bankers are asking for more collateral, and more "cash flow" lending projections. When times get tough, seems that bankers get tougher.

* The federal government sends mixed signals, cutting funds for the Agricultural Department and cutting some farm benefits while then adding one-time "farm checks."

* More and more farmland is converting to pasture or going fallow because farmers are often competing with oil companies or cities, pulling water tables down. This often results in increased presence of brackish water. The days of unlimited water supplies are disappearing.

We write this not as distant observers, because my family roots come from farming folk in West Texas.  I have owned, operated and managed farms during my 71 years.  My mother, father, grandparents, and great grandparents all had farm and ranch experience. I ran the farm assets for a bank trust department, with farms over a large area. Plus we appraise and do feasibility studies for farms and ranches all over the country.

A drive through the panhandle of Texas running south between Amarillo and Lamesa reveals a path through what once was some of the most productive cotton farming country in the USA.  Now we see changes, more land converted to pasture. Once irrigated farms have converted to dryland, reducing yields.  Some farmers are attempting diversified crops such as sunflowers, peanuts, wheat, milo, sugar cane, as well as different grass and hay crops.  In areas such as the southeastern USA, soybeans and rice are grown, in the Midwest and other areas corn is still an attractive crop.   But with our biggest customer, China buying less, some markets are askew. Some farmers are farming less and selling assets. Some are considering exotic crops such as vineyards, hemp and others.

"We see companies buying what was farmland and selling "frack sand."  Other landowners are selling their water to the oil and gas companies for fracking. For some  farmers who have oil and gas drilling nearby, it is more profitable to sell 'sand' or 'water' to the oil companies than to struggle to make a profit with crops. "If there is oil drilling nearby,"  Don Bethel, a farm broker in Lamesa, Texas, told us, "there are still more buyers than sellers for land in this area."

The city of San Antonio, Texas has been buying water rights from farmers for years, 10, 20 30 miles from town and paying farmers not to farm but to sell them water instead.  As towns grow and run out of water, they are often willing to buy the water from farmers and ranchers.  One farmer told me:  "I can make more money selling water than trying to farm."  So he converted farmland to dryland and grass pasture. Selling his water to keep the nearest town alive.

With this in mind, we appreciated Chuck Jones's recent article in Forbes Magazine, with many current insights on agriculture and farming trends. We have included quotes from that article along with graphics, knowing that sometimes a picture is worth a thousand words. Many of the graphics come from the USDA or the Farm Bureau. We give credit to him and Forbes Magazine for this material they published on the internet.  Following are some excepts: 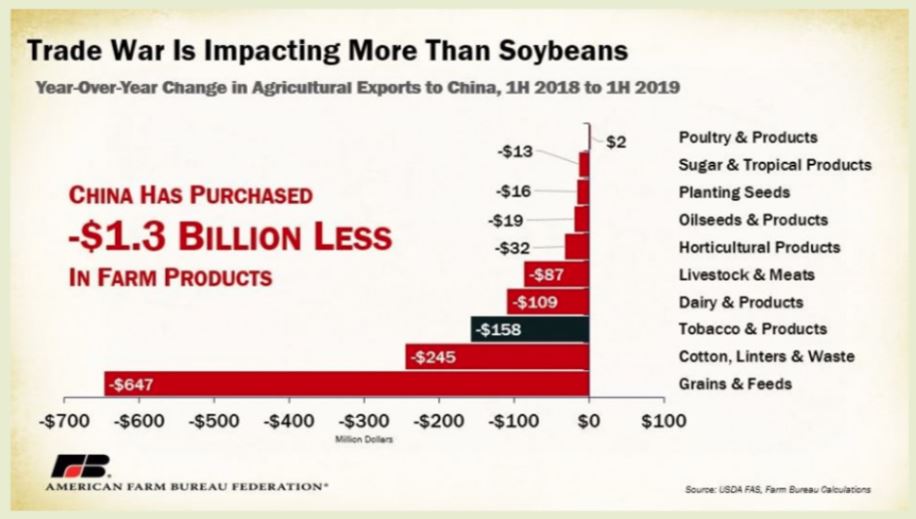 Farmers are pretty much under stress all the time since many factors that affect their livelihood are outside of their control. However, over the past few years the combination of

*China freezing the imports of U.S. grown crops due to tariffs

All of these have created a "perfect storm" challenging farmers. 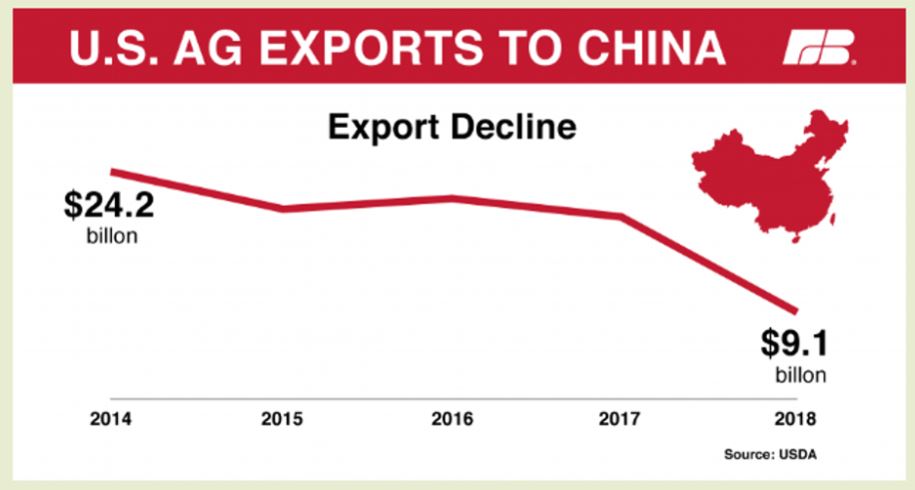 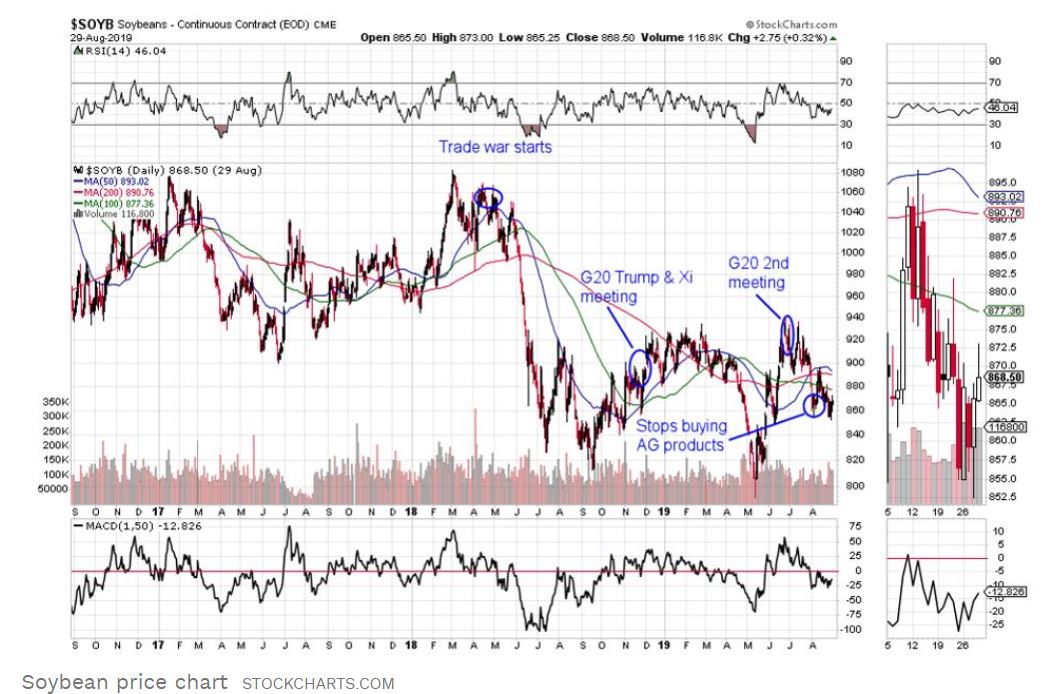 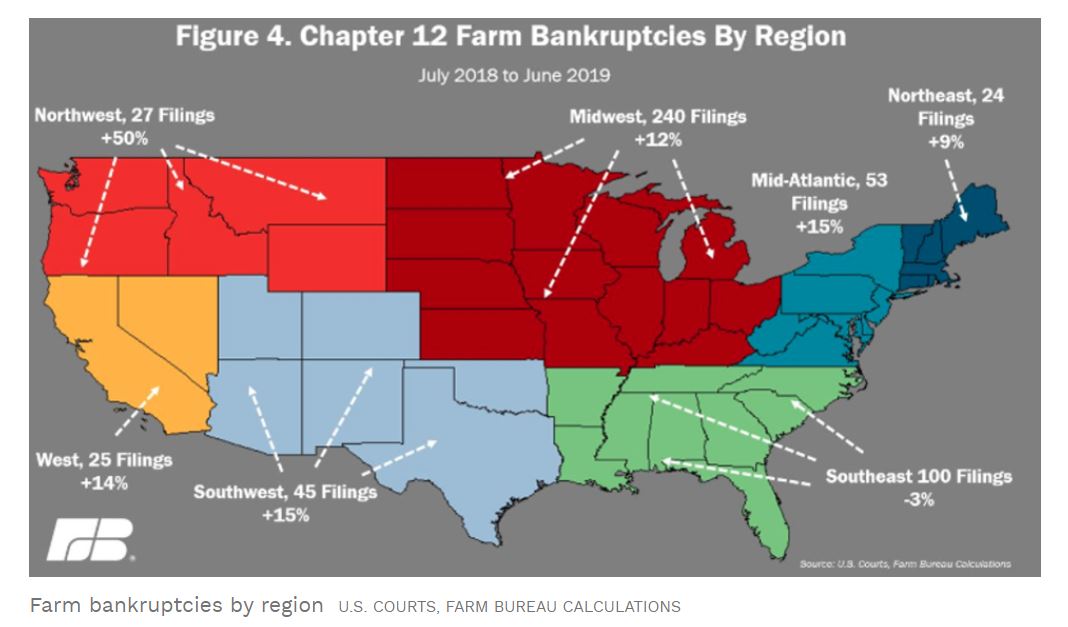 We see that the Midwest led the nation with 240 farm bankruptcies.  The Southeast states had 100 filings which was the only area where bankruptcies declined.

When we look at farming purely as a business, we see that the net income from farming is tight.

This is not a new trend, but as the charts tell us, net farm income, when adjusted for inflation, has been trending down for some time now. Profit  margins for farmers are under pressure when prices for farm crops decline so much.  Just consider that US farming is still overwhelmingly comprised of family businesses. Ninety-nine percent of U.S. farms are family farms, and they account for 90 percent of farm production.

Small farms make up 90 percent of the farm count and operate half of the farmland. The largest share of farm production (45 percent), however, occurs on large-scale family farms, although small farms account for half of poultry and hay production.

Small farms are much more likely than larger farms to have an OPM (operating profit margin) of less than 10 percent, an indicator of high financial risk. Between half and three-fourths of small farms have an OPM that low — depending on the farm type — compared with 31 to 42 percent of midsize and large-scale farms.   So when a tariff war or a nation stops buying soybeans, or corn the profit margins drop significantly.    Agriculture, it is said, led the way in the Great Depression of the 1920's.  Profit margins simply dropped below "survival" levels. 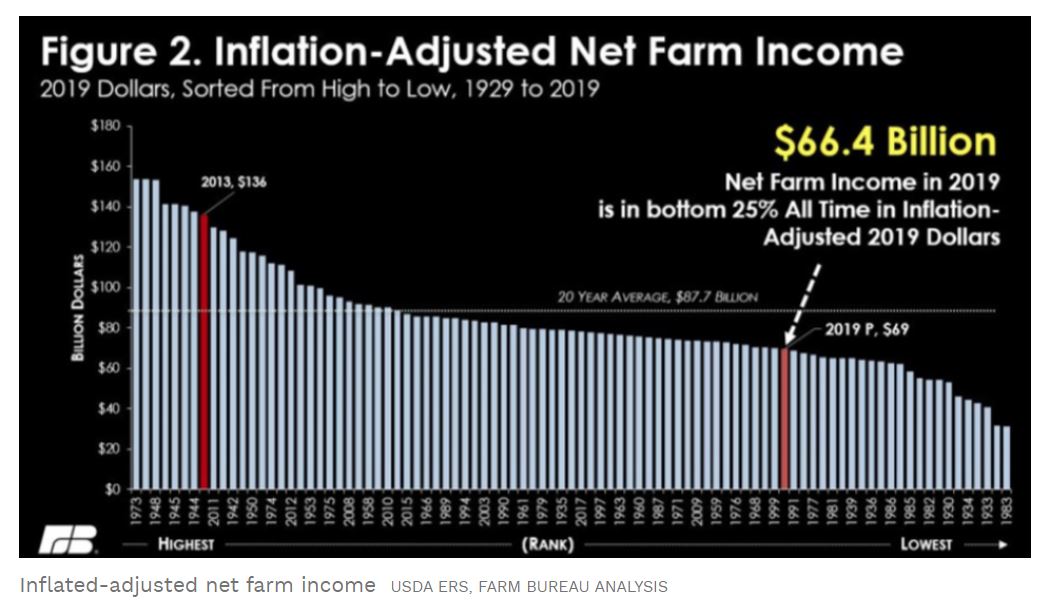 A dangerous trend, as this chart shows, is that farm products and markets that once were U.S. customers are now being replaced by farmers from other countries. As this chart shows, wheat exports from the USA are declining, whereas Canada and Indonesia are increasing their wheat sales to China.  Essentially, they are taking the business away from American farmers, due to the US conflict with China. 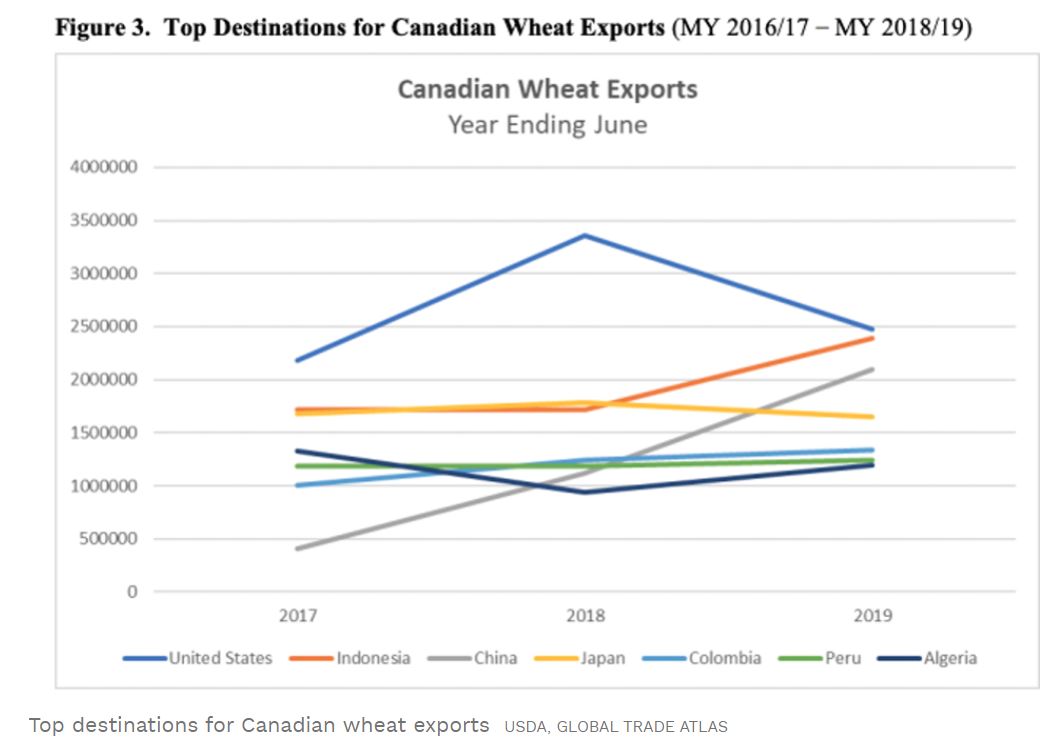 International markets that the United States have cultivated for business and exports for years are declining. Other nations are taking a larger share of these markets. Plus, Chinese farmers are increasing their growth of wheat crops. 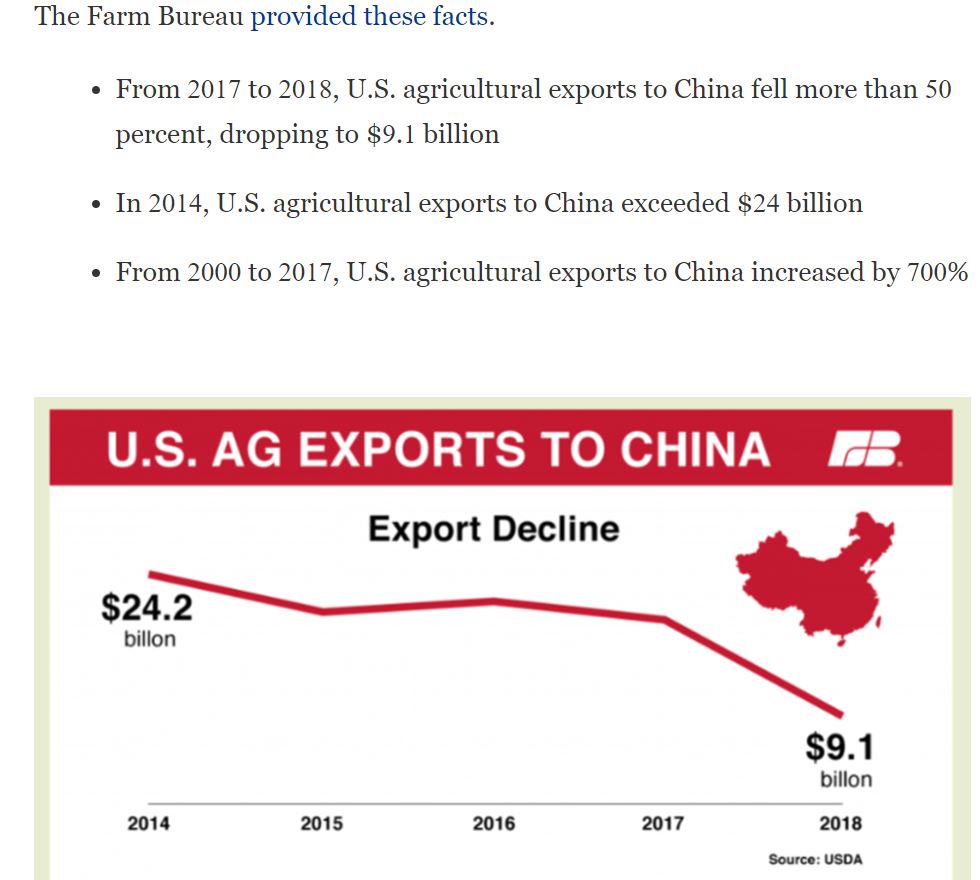 So the trend from 2014 to early 2017 was fairly stable, but then in 2017 and 2018 agricultural exports from the USA to China declined. And even more is not charted here. We believe this is largely due to political conflicts between China and the USA.  All of this tends to push stress levels of farming to high levels. Most farmers in this survey are fearful of financial issues. More than 87 percent fear losing their farms, and 75 percent worry about the farm economy. 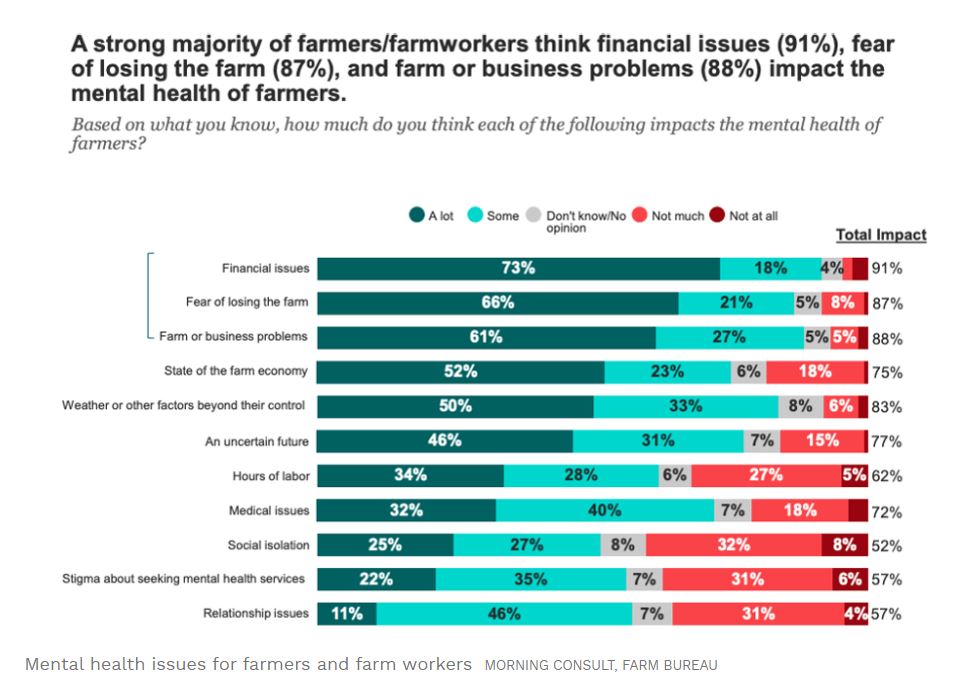 Thus we see that commercial farm loans past dues are gradually increasing as many of the above items have emerged.  Past dues have particularly increased in the first quarter of 2019. 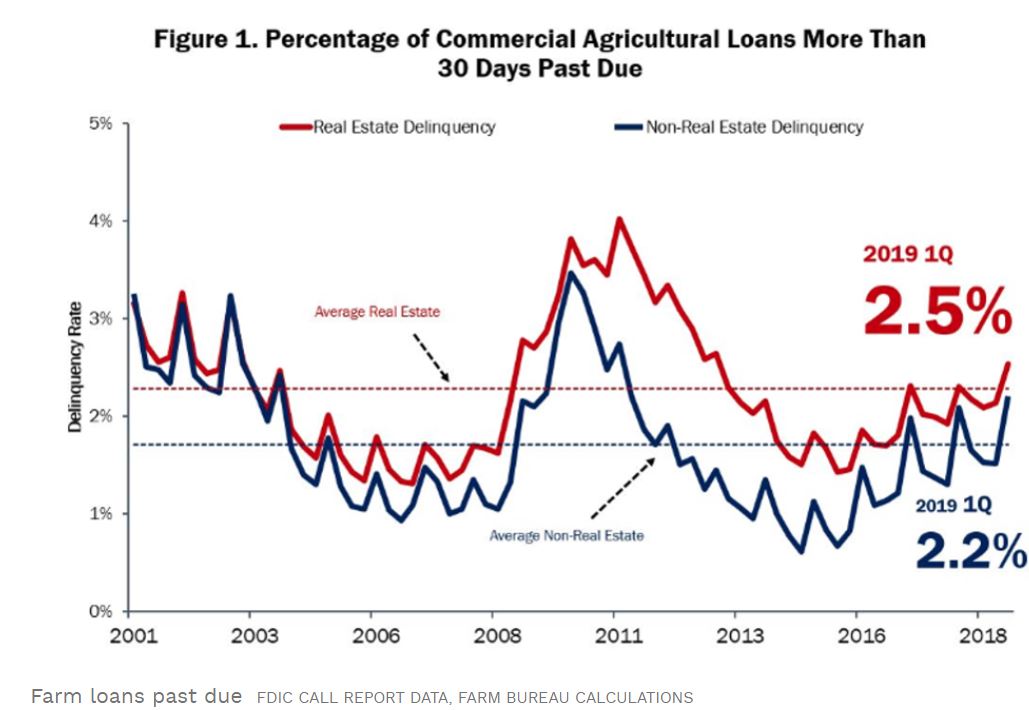 The American farmer is a resilient, tough, smart operator in a business that has many variables. Farm and agricultural production is a huge part of the American economy. But these trends are just a beginning unless farmers demand changes.  We at BootheGlobalPerspectives have long admired and have faith in the farmers of America. Our appraisal companies, BBAR Inc, and The Boothe Companies, have appraised farms, ranches and all kinds of properties coast to coast. We also come from farming stock and have farmlands of our own. We have been impressed with the innovative ways farmers adjust to changing circumstances.

I have also been a banker in a farm community, and I not only made loans to farmers, but ran a trust department with farms and ranches in West Texas. Farmers in America and their bankers like to know the facts and be told the truth. When they see facts, a good farmer, and a good farm banker,  adjust their strategy. The farmer adjusts crops,  methods and his overall plans. Sadly, we see that the truth these days is that many of the problems farmers in the USA now face are caused by policies set by powerful people who have no experience or knowledge about farming. THE TRUTH IS:  The problems today are from policy decisions made by politicians far away from the farm.

During the Great Depression, when so many farmers suffered, the parents and grandparents of today's  farmers analyzed the problems and then made adjustments to correct issues or the sources of disastrous farm policies.  We have confidence that our excellent farmers of today, when clear-headed, will prevail. It is important for the economy and well being of the United States.

For farm and ranch appraisals or feasibility studies, contact  BBAR Inc. (Ben Boothe and Associates), 817 793 1484 or see www.benboothe.com, or email: benboothe@gmail.com   Perhaps we can help, or speak to your group or people.  Let us hear from you!  We are on your side!   Ben B. Boothe, Sr.