Sludge as Fertilizer on Crop Lands May be Harmful to Health! What Are We Feeding Our Families?

Years ago when I was a banker and running a trust department in Swisher County, Texas, we had cattle feed lots as well as a need to dispose of sewer sludge. One of our creative people in town devised a system to spread the sewage "sludge" (we might call it poop) over farmlands on the edge of town. The idea of "free fertilizer" seemed logical and a cost-effective way to deal with this. We actually thought, "This is a great example of recycling!" Later on, in other parts of Texas, we visited dairy operations and found that they had big tank trucks that would contain and deliver the feces from the dairy cattle and drive to nearby farmlands and spew the sludge out on the fields, again calling this environmental recycling. We contacted an engineer at Environmental Solutions, and they confirmed that toxic or harmful chemicals were very possible in this sludge. Environmental solutions has people who can test your soils for PFAS.  As time has gone on, research has indicated that this sludge can potentially contain harmful chemicals. These chemicals pop back up in area drinking water, anywhere food crops are grown -- even in fresh foods.

Also, we noted that labels and definitions sometimes can hide the toxic potentials, as we noticed the difference between "natural" and "organic" definitions for handling sludge and edible crops.  See this example:

A simple reading of the above should give people interested in healthy food something to think about. So we appreciated the article attached written by the AP's  Michael Casey (from Boston) and AP reporter Ellen Knickmeyer (from Washington, D.C.). We also thank John Flesher @johnflesher and Michael Casey @mcasey1. Credit goes to them, and we encourage you to follow their other writings. We reprint this as a non profit interested in public knowledge and welfare.  -- Ben Boothe, publisher: BootheGlobalPerspectives

LAPEER, Mich. (AP) — For more than 20 years, the eastern Michigan town of Lapeer sent leftover sludge from its sewage treatment plant to area farms, supplying them with high-quality, free fertilizer while avoiding the expense of disposal elsewhere.

But state inspectors ordered a halt to the practice in 2017 after learning the material was laced with one of the potentially harmful chemicals known collectively as PFAS, which are turning up in drinking water and some foods across the U.S.

Now, the city of 8,800 expects to pay about $3 million to have the waste treated at another facility and the leftover solids shipped to a landfill. Testing has found elevated PFAS levels in just one field where the sludge was spread, but farmers have lost an economical fertilizer source and hope more contamination doesn’t turn up.

“I feel bad for them,” said Michael Wurts, superintendent of the waste treatment plant, who ruefully recalls promoting sludge as an agricultural soil additive to growers in the community. “The city didn’t do anything malicious. We had no clue this was going on.”

About half of the 7 million tons generated annually in the U.S. is applied to farm fields and other lands, the Environmental Protection Agency says. While the sludge offers farmers a cheap source of fertilizer, there long have been concerns about contaminants in the material — and attention of late has turned to perfluoroalkyl and polyfluoroalkyl substances, or PFAS.

The city of Marinette, Wisconsin, has stopped distributing sewage waste, also called “biosolids,” to farms after getting high PFAS readings. In Maine, a dairy farm was forced to shut down after sludge spread on the land was linked to high levels of PFAS in the milk. 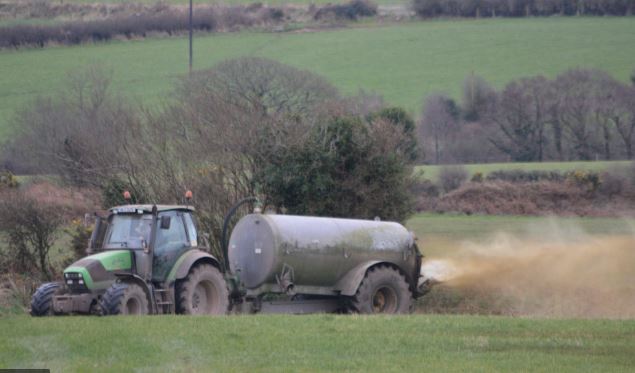 “It’s been devastating. We kind of get treated like we are criminals,” said Stoneridge Farm’s Fred Stone, whose blood has also tested high for PFAS from what he believes was drinking contaminated water and milk over the years.

The concern is that certain PFAS chemicals, which studies have associated with increased risk of cancer and damage to organs such as the liver and thyroid, could be absorbed by crops grown in soils treated with polluted sludge and wind up in foods. The Food and Drug Administration this year reported finding substantial levels of the chemicals in random samples of grocery store meats, dairy products, seafood and even off-the-shelf chocolate cake, although the study did not mention any connection to sewage waste.

The FDA continues to work with other federal agencies to identify sources and reduce or eliminate pathways for dietary PFAS exposure including through use of biosolids,” spokeswoman Lindsay Haake said.

The extent of any threat to the food supply is unknown because so little testing has been done, scientists say.

“We don’t have a lot of data but the data we have suggests it’s a problem,” Linda Birnbaum, director of the National Institute of Environmental Health Sciences, said at a recent conference in Boston. “We are finding that there are elevated levels of different PFAS in biosolids. We clearly need more research in this area.”

Studies have documented PFAS absorption by some crops — lettuce, tomatoes and radishes among them — from soils fertilized with sewage byproducts. And the EPA’s inspector general reported last year that the agency was falling short in tracking hundreds of pollutants in sludge, including PFAS.

Yet despite growing evidence that at least some sludge is contaminated, the federal government hasn’t limited PFAS in fertilizer or developed a standard for determining safe levels. That leaves fertilizer companies and farmers wondering what to do and fearful of consumer backlash.

“If you want to destroy agriculture in Michigan, start talking about, ’Hey, it could be contaminated with PFAS,” said Laura Campbell, agricultural ecology manager for the Michigan Farm Bureau. “People will see that and say, ‘Oh, we can’t trust them, we’ll buy from elsewhere,’ even though the problem is no worse in Michigan than it is anywhere else.”

Studies going back almost two decades found PFAS in sludge, primarily from industrial wastewater that flows to municipal treatment facilities. Residential sewage is another source — from carpets, clothes and other household items containing PFAS. The grease- and water-resistant compounds, known as “forever chemicals” because they don’t degrade naturally and are believed capable of lingering indefinitely in the environment, also are found in firefighting foam used at military bases and airports.

Evidence of a link between PFAS-laced sludge and food emerged in 2008, when the EPA found elevated levels of several compounds in sludge that a Decatur, Alabama utility had spread on 5,000 acres of farmland. They were detected in nearby waters and vegetation from the fields. The chemicals were traced to several companies that manufactured and used PFAS.

“I’m very concerned about replicating that in other states,” EPA’s Andrew Lindstrom, whose lab ran tests there, said at the Boston conference. Milk from one dairy contained 270 parts per trillion of PFAS — almost four times the agency’s nonbinding health risk level of 70 ppt for PFOA and PFOS, the two best-known chemicals in the class. 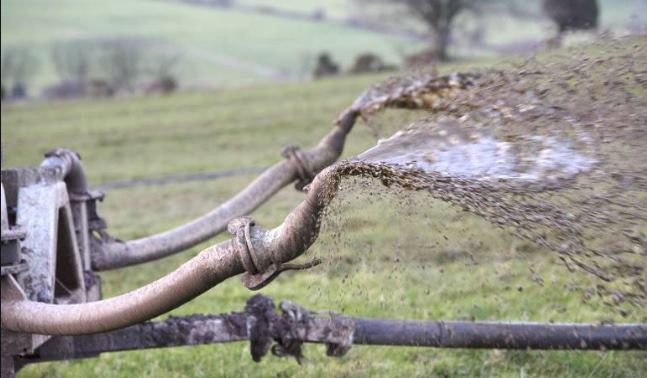 An EPA “action plan” in February acknowledged “information gaps” about tainted sludge. It said the agency was developing better detection methods and assessing risks posed by PFOA and PFOS, which no longer are manufactured in the U.S. but remain widespread in the environment.

“We are studying the potential pathways by which PFAS are getting into biosolids and we are researching alternative methods for removing or destroying PFAS in biosolids if analysis indicates that detected levels are of risk and need reduction,” the agency told The Associated Press in a statement.

Advocacy groups say EPA also should look at chemicals developed as replacements for PFOA and PFOS, which studies found accumulate in edible parts of plants.

“At least EPA should require that sludge be tested for PFAS before being applied to farm fields,” said Colin O’Neil, legislative director with the Environmental Working Group.

Its inspector general reported last year that the EPA had identified 352 pollutants, including PFAS, in biosolids. But the report concluded the agency had too little data and other tools to assess their safety. Regulations require testing for only nine pollutants in sludge, all heavy metals.

Several states are examining sewage sludge for PFAS contamination and assessing potential dangers. Maine has enacted a nonbinding advisory level for PFAS in sludge and New Hampshire is working with the U.S. Geological Survey on a soil study whose results will help them set a standard.

Maine also found most biosolids from more than 30 wastewater treatment plants were above the state’s advisory level while neighboring New Hampshire detected PFAS in tests of sludge from two dozen permit holders. Neither state found traceable levels of PFAS in the milk tested.

Based on sludge tests at 41 plants, Michigan ordered several to stop distributing it to farms.

Among them was Lapeer Plating & Plastics, the automotive chrome manufacturer that caused the Lapeer contamination.

But City Manager Dale Kerbyson said the company has reneged on a promise to help cover Lapeer’s costs of dealing with the pollution and a lawsuit may be coming. “I don’t think the citizens of our city should have to pay for this,” Kerbyson said.

Lapeer Plating & Plastics did not respond to email and phone messages seeking comment.

Although they complain about a lack of government standards, some cities and towns fear strict rules that could force costly infrastructure upgrades or sending sludge to out-of-state landfills. And companies worry they will be put out of business.

“This is the biggest issue that has hit the biosolids recycling profession in North America ever, because of regulatory overreaction,” said Ned Beecher, executive director of the North East Biosolids and Residuals Association.

“We don’t want people jumping to conclusions,” said Frank Franciosi, executive director of the U.S. Composting Council. If EPA cracks down on anyone, he said, it should be those who manufacture and use PFAS chemicals that enter the waste stream.

Call Environmental Solutions if you would like your soil, farm or lands tested for PFAS.  The fee may be little compared to long term health risks.    Ben Boothe, SR.   817 793 1484