Kids, Poor Immigrants, Immigration, and Ethical Values of the USA

They applied for legal process to come to America and were told there was a presidential decree that meant they would have to wait back across the Rio Grande, in Mexico, for their immigration papers to be processed. They had suffered a trip of almost 1,000 miles, tired, exhausted from temperatures often over 100 degrees, no place to stay, and he and his wife Tania Vanessa agreed: "Let's just cross the river. We can wait here for who knows how long?" Almost out of money, they were not yet out of hope.

He went first, holding his daughter, until they reached the muddy weed shore, and he told Valeria, "You stay here, don't move, I will go get mom." but Valeria didn't want to stay there alone, so she jumped into the river toward her dad. He managed to stuff her under his shirt to hold her, but the current took them both under. As Tania Vanessa watched, her husband and daughter died, with Valeria's  arm still around her father's neck. 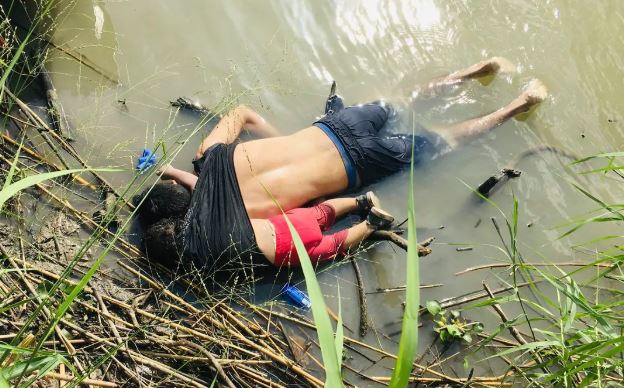 A simple command from our President, "Make them wait in Mexico," coupled with a bureaucratic system that sometimes takes months to complete -- all purposely intended to discourage people from immigrating to the USA.  These are not terrorists. They are not drug dealers. They are simply good people trying to escape a crime-ridden homeland to start a new life in a country where the system "is not corrupt or unfair."  They died seeking the American dream. 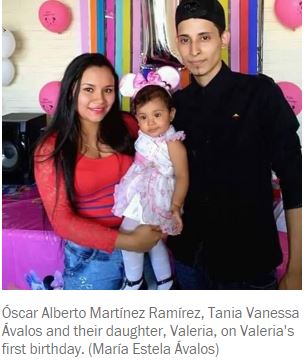 But the story does not end here.  Drive to Clint, Texas, along the border near Mexico, where a detention facility supposedly housed 300 kids. Some of the kids, run down from the long journey, became infected with the flu, so the older children were trying to help the younger children. But they didn't have beds, cushions, soap, and many were sleeping on concrete floors wrapped in Mylar plastic sheets instead of being given real sheets, blankets and pillows. Not until a congress woman wrote a letter and sent it to the newspapers did they take these kids out of that squalid building. They said they were taking them to an "unnamed location."

The great United States of America. Ours is the richest nation on earth, and we improvise cruel systems for families and children? How can we allow our elected officials and their gang of followers to treat human beings, families and children this way? Surely, we can find a bed, a pillow, a blanket, a toothbrush, a doctor, medicine and an accounting system so that children and parents know where they are. What is happening to our great nation?

We must do better as a nation and as a people.

Damarys Perez Carrillo, from Guatemala, waits near the border shortly after being returned to Ciudad Juarez, Mexico, to wait for her asylum hearing in the United States on June 13. (Carolyn Van Houten/The Washington Post)

U.S. asylum officers slammed President Trump’s policy of forcing migrants to remain in Mexico while they await immigration hearings in the United States, urging a federal appeals court Wednesday to block the administration from continuing the program. The officers, who are directed to implement the policy, said it is threatening migrants’ lives and is “fundamentally contrary to the moral fabric of our Nation.”

The labor union representing asylum officers filed a friend-of-the-court brief that sided with the American Civil Liberties Union and other groups challenging Trump’s Migrant Protection Protocols program which has sent 12,000 asylum-seeking migrants to Mexico since January. The policy aims to deter migrants from coming to the United States and to keep them out of the country while courts weigh their claims.

The union argued that the policy goes against the nation’s long-standing view that asylum seekers and refugees should have a way to escape persecution in their homelands, with the United States embracing its status as a safe haven since even before it was founded — with the arrival of the Pilgrims in the 17th century. The union said in court papers that the policy is compelling sworn officers to participate in the “widespread violation” of international and federal law — “something that they did not sign up to do when they decided to become asylum and refugee officers for the United States government.”


The experimental U.S. policy requires migrants to wait in Mexico while their asylum claims are processed. (Luis Velarde/The Washington Post)

“Asylum officers are duty bound to protect vulnerable asylum seekers from persecution,” the American Federation of Government Employees Local 1924, which represents 2,500 federal workers, including asylum officers, said in a 37-page court filing with the U.S. Court of Appeals for the 9th Circuit in California. “They should not be forced to honor departmental directives that are fundamentally contrary to the moral fabric of our Nation and our international and domestic legal obligations.”[Legal battle over Trump border policy intensifies]

The legal filing is an unusual public rebuke of a sitting president by his own employees, and it plunges a highly trained officer corps that typically operates under secrecy into a public legal battle over one of Trump’s most prized immigration policies.

Under Trump, the asylum division has become a target of internal ire, often assailed for approving most initial asylum screenings and sending migrants to immigration court for a full hearing. Trump administration officials say most cases are denied. Last week, the acting director of U.S. Citizenship and Immigration Services, Ken Cuccinelli, outraged some asylum officers by sending the staff an email they thought criticized them for approving so many initial screenings.

Trump placed Cuccinelli, an immigration hard-liner and former Virginia attorney general, in the position ostensibly as part of his move to get tough on immigration policy, and the union’s legal filing appears to be directly at odds with that approach.

Cuccinelli issued a series of late-night tweets berating the labor union for filing the lawsuit, saying it is “an attempt by the union to score short-term political points,” and that the asylum system “will collapse under this influx of fraudulent and non-meritorious claims.”

“We have a crisis at our southern border. While the union plays games in court, @POTUS and this administration is taking action to secure the system and prevent the further loss of lives,” Cuccinelli wrote, tagging the president in his tweet. “MPP protects both the vulnerable, while they wait for their hearing, and our asylum system from choking on meritless claims. THAT is what protection officers signed up for.” The MPP policy has been challenged in federal court, with a lower-court judge temporarily halting MPP in April, saying it probably violates federal law. A three-judge appellate panel allowed the program to resume in May while the court considers the policy.

Justice Department lawyers have said in court filings that migrants are filing thousands of sham claims because they virtually guarantee their release into the United States pending a hearing in the backlogged immigration courts. The U.S. government cannot process the migrants’ cases quickly or detain children for long periods, which means some migrants can stay in the country for months or years while waiting for their cases to play out.

[In test of a deterrent, Juarez scrambles before U.S. dumps thousands of migrants]

Ending the program, the government lawyers have said, “would impose immediate, substantial harm on the government’s ability to manage the crisis on our southern border.”

The Justice Department declined to comment on the filing Wednesday. A spokeswoman for the Department of Homeland Security, which oversees the program, said, “it is a matter of policy that DHS is not able to comment on pending litigation.”

The influx of Central American migrants at the southern border has overwhelmed the U.S. immigration system. It also has led to a political fight between congressional Democrats and the White House regarding crowded and unsanitary conditions in border holding facilities amid Trump’s push for heightened enforcement. More than 144,000 migrants were taken into custody in May after crossing the southern border, the largest monthly total in more than a decade, and asylum filings have soared.

Trump administration officials this week have been pleading with Congress to approve emergency funding for the humanitarian crisis at the border. The Senate on Wednesday responded, passing a $4.6 billion emergency spending measure amid debates about treatment of migrants and the risks they face as they try to enter the United States, with a graphic photo of a migrant and his young daughter having drowned in the Rio Grande as the backdrop.

In the federal court filing, the asylum officers say they are enforcing the laws as Congress intended, based on approaches and international treaties shaped after World War II and atrocities connected with the Holocaust. Federal laws hinge on the principle of “non-refoulement” — which means people should not be sent back to countries where they could be harmed or killed. To qualify for asylum, migrants must show that they face harm based on their “race, religion, nationality, membership in a particular social group or political opinion.”

The asylum officers say Mexico is too dangerous for Central American asylum seekers, particularly women, people who are gay, lesbian or transgender, and indigenous minority groups. They cited State Department reports showing that gang violence and activity is widespread and that crimes are rarely solved.

“Mexico is simply not safe for Central American asylum seekers,” the filing said, noting that gangs that terrorized migrants in their home countries might easily follow them into Mexico. “And despite professing a commitment to protecting the rights of people seeking asylum, the Mexican government has proven unable to provide this protection.”

Asylum officers say the U.S. asylum system is “not, as the Administration has claimed, fundamentally broken,” and that they could handle more cases quickly without sending people back to Mexico.

MPP is “entirely unnecessary, as our immigration system has the foundation and agility necessary to deal with the flow of migrants through our Southern Border,” the officers wrote.

The officers said they fear that MPP is sending asylum seekers back to a country where they are in danger, a violation of federal and international law. The said immigration agents do not ask migrants if they fear persecution or torture in Mexico, and that they only send migrants to asylum officers for screenings if the migrants independently express fear of return.

The latter are granted an initial asylum screening, often by phone or video. But they must prove that they are “more likely than not” going to face persecution in Mexico, a higher bar than in the immigration courts, where migrants are offered safeguards such as access to lawyers, a reading of their rights, and the right to appeal.

“The MPP, however, provides none of these safeguards,” the officers said.

Officials are attempting to extend the program along the nearly 2,000-mile border and are giving Mexico time to expand its shelter capacity, a top official at U.S. Customs and Border Protection has said.