Economists and financial observers like us at BootheGlobalPerspectives are watching the impact of job creation or job losses as a result of uncertainties and economic impacts of the "trade war" and "tariff battles" initiated by the White House. During the last 18 months of the Obama administration and the first 12 months of the Trump administration, we became accustomed to seeing growth of 120,000 to 250,000 new jobs per month. A month ago we saw 224,000 new jobs created in the USA, according to the Labor Department.  But the most recent reporting month (May, 2019) new jobs dropped to 75,000. This may suggest that the economy is suffering from "shock and concern" over economic impacts of the new international trade wars and tariffs the White House is creating. Companies just aren't hiring due to an unpredictable future. There is a lack of confidence in the business world, in the economic leadership and in direction the government is heading.

1. The ISM Manufacturing Index fell to the lowest level of the Trump presidency last week, another negative economic signal relating to tariff and trade war policy.

2. The Federal Reserve is so concerned that it has signaled that it plans to lower interest rates to stimulate economic activity in July.

3. Rates on 10-year US Treasury notes fell to close to another two-year low, which means people are buying bonds for security.

4. Michael De Palma, director of MacKay Shields, said: "There's just tons of uncertainty" in this economy. There is that word again: "uncertainty."

6. Ford and GM have repeatedly warned Trump of the harm tariffs could cause the auto industry.

7. High tech companies such as Apple that have products made in China could be hurt if China adds them to its tariff list. Thus more and more manufacturing companies are looking for alternative locations that are "tariff free" to make their products.

Plus there are other factors:

* Huge weather issues from floods, storms and hurricanes have set back the economy and cost the nation billions of dollars. Most scientists believe these weather extremes (that were long ago predicted by Al Gore) may be because of global warming.

* Finally, the new income tax law passed by Republicans before Democrats gained control of the House of Representatives, is not creating surplus funds as its proponents promised. Actually, we are seeing the highest deficits in history. The new income tax law has created more deficits, not greater income. Sadly, the middle class is having to carry the load and pay the bill because the law gave big corporations huge tax credits, while taking "taxable deductions" away from ordinary middle class Americans. "It just didn't do what Republicans said it would do," said Ernst Diener, an economist and writer on economic trends. 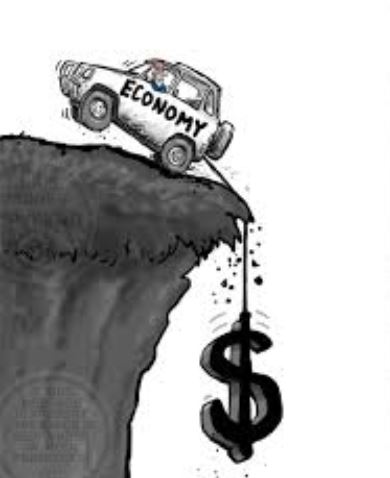 BROADER IMPLICATIONS THAT MAY BE PULLING THE AMERICAN ECONOMY DOWN:

Martha Gimbel, research director for Indeed.com says, "The slowdown is really coming from the sectors that are most susceptible to trade tensions like manufacturing, construction, mining and logging."

We at BootheGlobalPerspectives might add that farming, food production distribution and processing, food service, auto sales, small business and internet sales are also impacted by prices rising and new tariff economics. The most recent "threat" to raise tariffs on items from Mexico, if realized, would have cost the Texas economy $25 billion alone, not considering New Mexico, Arizona and California impacts, because they also share a border with Mexico and do business with Latin America. The Texas Republican lobby was furious about Trump's "Mexico tariff" threats, and Trump faced a virtual mutiny from his party in Texas. Knowing that he could not win another presidential election without Texas, he pulled back on those tariffs.

Huge increases in military spending under Trump's "hawks" who advise him in the White House, are becoming harder and harder to justify. There simply isn't enough money to be the world's policeman under this style of leadership.

We are hopeful that cooler and wiser heads will come into play in managing the U.S. economy, because we are seeing cracks internationally. The weight of these many trends could pull the U.S. economy over an economic cliff.

Someone, some group, some political party, some wise leaders, must begin to take action and bring wisdom, planning and experienced leadership back into the process of economic policies and military policy.

What if this happens while the Middle East continues to be a powder keg politically? We could see horrific global downturns and impacts.

THE BOOTHE CYCLE OF ECONOMIC TRENDS:

Conflict and social unrest, leading to ...

A demand for change, new leadership, new direction, leading to...

Peace and prosperity, confidence and long-term confidence in our system of government.

Let us hope better informed and wiser heads begin to see their advice and leadership followed.

We need AMERICANS... not DEMOCRATS, REPUBLICANS, OR WHATEVER IDEOLOGY.  WE NEED PEOPLE WHO ARE AMERICANS FIRST.

(Our thanks for some facts from public data, articles from the Washington Post, Wall Street Journal and other sources we deem to be credible)