Oil bulls thought 2020 would be their year.


After half a decade of lower spending on new projects, oil production growth was supposed to slow to a trickle just as demand was supercharged by a once-in-a-generation shake up in the shipping fuel market. Many market commentators predicted that if $100 a barrel-oil was going to make a come back, it would happen in 2020.

Excitement is fading fast. The first official assessment of 2020 comes from the International Energy Agency on Friday, but a first look at forecasts from consultants and traders for supply and demand balances show persistent surpluses, not the deficit that was expected to underpin rising prices.

The culprits: rising shale production, a slowing global economy and the prospect of a deepening trade war.

"The balances for 2020 were already worrisome, and the downgrade in demand we are contemplating put them potentially in the ugly category," said Roger Diwan, an OPEC watcher at consultant IHS Markit Ltd.

Consultants and oil traders have already taken a first stab, and their supply and demand results show, at best, a balanced market. Many forecast supply will exceed consumption, perhaps by a large margin. 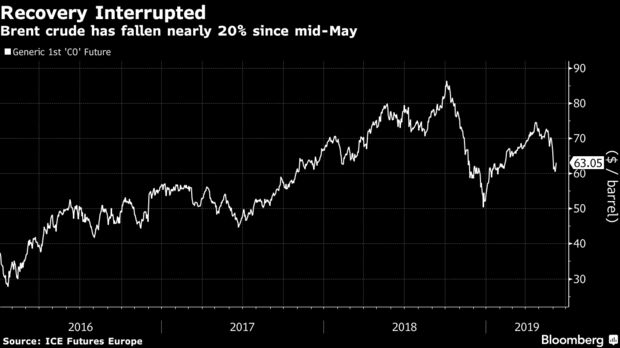 The oil market, showing characteristics typical of an equity market, is already starting to reflect the potential for a surplus in 2020. Despite a tight physical market due to Russia’s pipeline contamination crisis and U.S.sanctions on Iran and Venezuela, oil prices briefly dipped below $60 last week, down more than 20 percent from a high above $75 in late April.

"The market is asking why it should bother going long for just three months when the future looks bleak," said Amrita Sen, chief oil analyst at Energy Aspects Ltd.

The bearish outlook for next year is a problem for the OPEC+ alliance led by Saudi Arabia and Russia. If the 2020 forecast proves correct, the group may be forced to keep in place its output cut far longer than originally anticipated to prevent a surge in global oil inventories.

The OPEC+ alliance is set to meet in the next few weeks in Vienna to discuss its production policy for the second half of 2019.

The bulls weren’t completely wrong in their analysis for next year: the shipping fuel changes, known as IMO 2020, are all but certain to boost demand for diesel, perhaps pushing that particular corner of the petroleum market into a deficit. However, supply growth, fueled by a resilient U.S. shale industry, continues to surprise to the upside.

"The dynamic of the market has changed because of shale," Ben van Beurden, the boss of Royal Dutch Shell Plc, said in a panel at the St. Petersburg International Economic Forum last week.

What neither bulls nor bears could anticipate is U.S. President Donald Trump and his erratic policies, throwing wrench after wrench into the gears of the global economy. Earlier this month, the International Monetary Fund cut its forecast for economic growth in China -- the engine of demand for commodities -- to 6% next year, the lowest since 1990 and less than half the peak of 14.2% in 2007.

The first tentative glances into 2020 by oil consultants are nearly unanimous about the prospect of oversupply -- a view shared in private by major commodity trading houses. The surpluses are all the more remarkable because none is predicting a recovery in Iranian and Venezuelan output. Over the last year, the combined output of the two troubled OPEC producers has dropped roughly 2.2 million barrels a day -- equal to what Germany consumes. 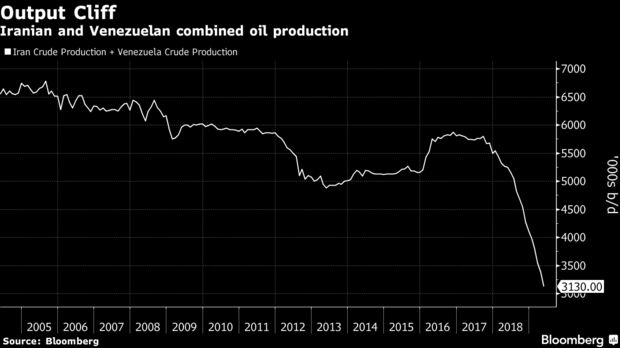 S&P Global Platts, the owner of what was previously named PIRA Energy consultants, put the surplus next year at around 400,000 barrels a day in a report to clients in May. The Energy Information Administration, the statistical arm of the U.S. Department of Energy, sees a 100,000 barrel-a-day excess. And Energy Aspects, another influential consultant popular with hedge funds and big trading houses, sees a "large" stock-build of 500,000 barrels a day. IHS Markit expects a total surplus of 800,000 barrels a day next year.

The surpluses, however, mask notable differences within the petroleum market, with most consultants anticipating a larger overhang in refined products than in crude.

Although the Paris-based IEA hasn’t yet published its first detailed look into 2020, it offered some glimpses of its thinking earlier this year when it published a 5-year outlook from 2019 to 2024. In that report, it forecast oil demand next year at 102 million barrels a day, and production from non-OPEC countries plus condensates from OPEC at 71.9 million barrels. That, effectively, will leave a gap for OPEC crude to fill of just 30.1 million barrels, close to the cartel’s current production.

Since the publication of the report, the IEA has raised its non-OPEC supply view for 2019, and lowered its demand forecast, suggesting that if the cartel keeps pumping at current levels, production will exceed demand in 2020.

Oil steadied near $54 a barrel after Saudi Arabia said it could agree on plans for production with Russia at the G-20 summit this month.