Texas Lyceum, one of the most influential organizations in Texas

May 3, 2019, marked the 40th anniversary celebration of the founding of Texas Lyceum. It was in 1980 that Texas Business Magazine published an article about the Rising Stars of Texas. The magazine had been running articles exploring concepts of encouraging and developing enlightened leadership. While the rest of the nation had continued a pattern of recessions every four-five years tied closely to Federal Reserve Bank interest rate cycles, Texas was consistently growing and emerging as a financial powerhouse.

Texas was emerging as an oil, coal, high technology, renewable energy, wind energy, high tech, defense and business-friendly growth centre. Companies were relocating from the Northeast by the dozens every month it seemed.  Low taxes and fewer "regulatory" burdens were appealing to California companies.  Texas unions, which are more reasonable with management, appealed to companies in Illinois, Ohio and Michigan. Low utility costs and a business-friendly environment was something Texas businesses and the new Texas Lyceum were preaching, as well as social responsibility,  higher education and support for science.  A few hats "MAKE AMERICA SMART AGAIN" reminded us all of the original Lyceum of Greece, which stated education, learning and science all were important to a successful civilization, successful business and successful living.

There was a belief 40 years ago,  that Texas would become more important as an emerging influence on national issues.  Thoughtful articles published by Texas Business Magazine aimed to bring on a new generation of exceptional young leaders,  a group of intellectual and "groomed" business leaders emerged.

Skipper Dippel, President of Brenham National Bank (Now Chairman) in Brenham, Texas was a “dream maker” and inspirational founder of this organization. Of course he had help, from many in 1980, see the panel below. I was personally impacted when Texas Business magazine called me one of the emerging “Rising Stars of Texas”. Skipper saw that article. I was called "The youngest bank president in Texas”, had written books, articles and had been slated by the World Bank and USIA (State Department) to present progressive concepts of banking, finance and economic development to several nations emerging from the break up of the Soviet Union.

One day I was sitting in my bank in 1980, when Skipper Dippel called me and with enthusiasm said: “We are starting a group of young movers and shakers. You are our kind of guy, will you join us!”. Sincerity, enthusiasm and vision, that was Skipper’s way.  He knew that the word “Lyceum” meant a special a place of education, founded by Aristotle in Athens Greece in 334 bce. Aristotle and Plato delved into deepest issues and made education and thinking "smart" popular. It became the foremost school of philosophy, lessons taught there still applicable today for successful civilization.   Sadly, some sectors of America had forgotten some of those basics. 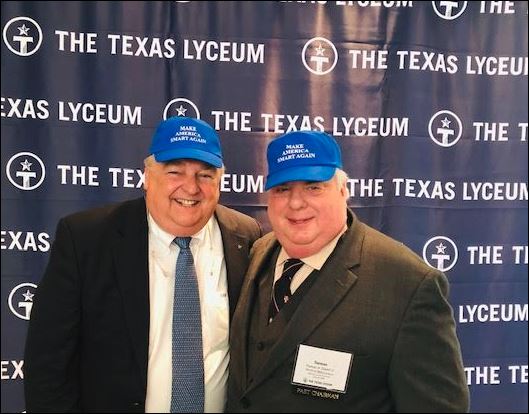 Skipper believed it was a cultural and moral responsibility for young leaders to be taught, educated and stimulated by the world’s best, in Texas, for Texas and the broader world it impacted.

Skipper insisted that the Lyceum reminded us repeatedly that "ethical and moral business is good business." I had just published a book, with a forward by Pat Boone, "TO BE OR NOT TO BE AN SOB,"  a reaffirmation of business ethics.

It is no wonder that our friendship has lasted all these years.

None of us 40 years ago imagined how successful the Texas Lyceum would be in bringing together leaders and thinkers from across the world to help us explore concepts of economic, cultural and political progress and leadership. With a reminder of ethical and moral decisions in business dealings, it was unique. For you see, ethical decisions take into consideration human rights and environmental concerns, as well as profitable business strategies.  Skipper Dippel saw that early on.  He believed it, and so did I.  Texas Lyceum became a way to ask important questions and develop important thinking for future Texas leadership. It avoided the "right" and the "left" and went straight to economic, social and people issues. It left the political ideologues out. The conversation had to be like Plato and Aristotle -- logical, moral, and enlightened, avoiding knee jerk emotional approaches that cause division.  The kind of conflict and division DC is spewing out these days was simply not appropriate for the Texas Lyceum. We were going after essential depth, not petty argumentation.

In these  last 40 years, Texas has emerged economically and politically and has indeed impacted the nation. More and more great leaders have grown up in and emerged from Texas, impacting millions of people. The Texas Lyceum has focused on solutions and progress, not division and political expediency.

Individual lives have been astonishing in their positive impact. Skipper Dippel, like many in the group, has seen an amazing personal life as a bank president and director of Blue Cross Blue Shield. He has won outstanding achievement awards in his life. He has served on important boards that impacted bank and economic policy. I remember people like Henry Kissinger, Lloyd Bensen, leaders from New York, Washington, D.C., Mexico, Europe, the United Nations flocking to Texas Lyceum meetings. Almost every politician who was elected or wanted to be elected attended and spoke to our group meetings. Forty years later, our meetings still attract those intellects who wish to discuss serious matters -- business leaders who look to replicate the incredible wealth that Texas has enabled. Politicians from state to national have flocked to hear the programs of the Texas Lyceum.

The Lyceum has become power center of influence. Leaders young and old gathered at the Bent Tree Country Club (where it started 40 years ago) May 3, 2019, to share stories, non-partisan conceps, and how the TEXAS Lyceum would continue to promote “enlightened leadership” for the next 40 years.

Lawyers, historians, business investors, political leaders, educators, CPAs and developers of huge public works programs, are attracted to Lyceum events. In past years, I can remember one meeting in which I noticed my friend Carl Stem, Dean of the Texas Tech Business school, and Governor Ann Richards sitting at my table.  Stem had been an economic advisor to Reagan, and Governor Richards, well, she was one of a kind. Men from the oil patch and businessmen from the Perot group, developers from Tramel Crow's group all were there.  Henry Kissinger, ambassadors from the United Nations and VIPs from coast to coast have expressed a desire to attend Texas Lyceum meetings. I was pleased to get to speak to Governor Richards, because she consistently saw my banks kept funds on deposits.

Sanjay Ramabhadran, who immigrated to the USA, is an example of new Lyceum leadership. His family is from India. With an international perspective, Sanjay, who had been successful in his work in the USA and joined the Texas Lyceum in 2013, is an excellent Lyceum president. He introduced Kathryne Bennett Hillier, Class of 1996, who moderated the panel discussion with Scott Bennet, class of 1980, Keen S. George, class of 1980, Gary Griffith, class of  1980 , and James Windham Jr., class of 1980, seen in this panel photograph.

All spoke of the history of state, national and world leaders who have participated in Texas Lyceum programs. Some stories were funny, others insightful. When, for example, the paid speakers from around the world ran up a Lyceum budget shortfall, they told us:

"No real panic.  Our board and members took care of the $65,000 shortfall painlessly. The goal and success of the Texas Lyceum was too important to let a small thing like money stand in the way," Ed Windham Jr. told us.

What a pleasure to be with some friends who I have not seen in 40 years. We have all celebrated diverse lives, many filled with contributions, challenges and successes. Some of my Lyceum friends have become multi-millionaires, others authors, some business leaders, others great leaders and resources for their communities. I have founded, run or managed several banks and then sold out and started BBAR Inc., an appraisal and environmental company.  We publish a free publication for VIPs, that has sometimes had a readership of more than 700,000 in 31 nations. BootheGlobalPerspectives.com and BBAR Inc. have taken me around the world numerous times, and I have represented the World Bank, USIS and State Department as an economic consultant in emerging democracies. Texas Lyceum: the friends I made and things I learned there have enriched my life.

But this time it was a personal pleasure, because my son, Ethan Boothe, was recently called a "Rising Star in Dallas, a rainmaker for his company" by the Dallas Business Journal. He joined me at this meeting. He then realized how important and valuable the Texas Lyceum had been for me, and I could see myself in him. Plus, I picked up a "recognition pin for 40 years of leadership service to Texas" to show to my son. What a joy! I see my son, Ethan, as one of the current  "Rising Stars of Texas." His title is Texas principle in charge of the State of Texas for Eisner Amper.  Another rising star just like I was 40 years ago. 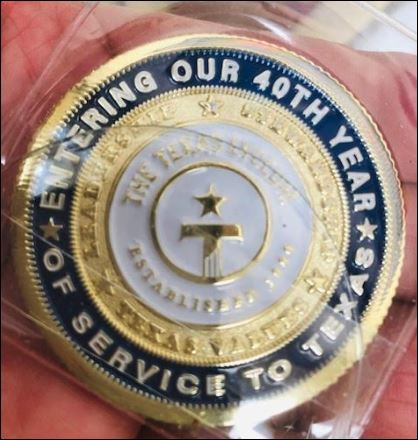 I am pleased an 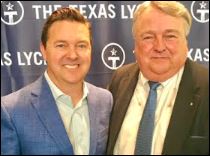 d honored to be a proud father. 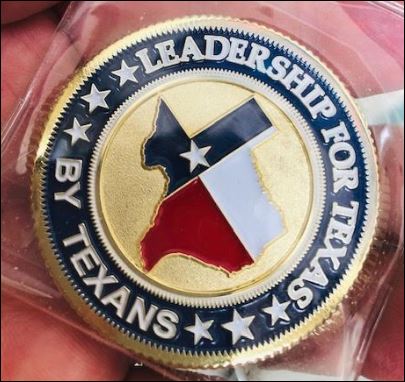