I'LL GLADLY PAY YOU TUESDAY FOR A HAMBURGER TODAY 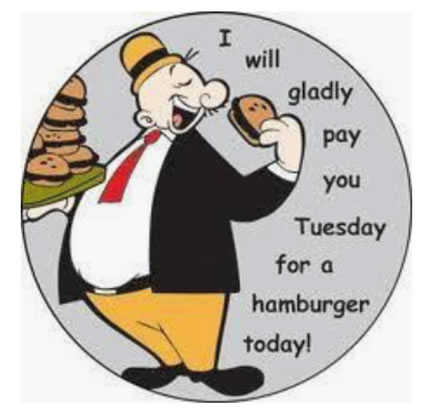 From government to high-flying finance deals, I am reminded of Wimpy, a character of the old Popeye cartoons I used to delight in when a child. The place of my enjoyment was the “LAWS BROTHERS DRUG STORE” located in White Settlement, Texas. It was next door to my father’s Ben Franklin Store. Laws had a full-service counter where they would cook hamburgers, make malts and milk shakes, and let us kids read the comic books while we ate. My dad’s “dime store” was where my father started me out in business, sweeping floors, delivering circulars, and gradually worked my way up to cashier. Dad taught me the essential ethics of hard work, earning and saving money, and striving for excellence in business. I was heartbroken when years later, as a new graduate of college, I proposed: “Dad, let’s be partners. We can have several stores.” He refused with: “Ben, you would be bored to death in this, you need to move on to high finance." I wept. Then I ended up working for Wall Street’s Merrill Lynch and then in a few years had a bank of my own. Dad was right. But as a banker, I learned the lessons of credit, the power of credit, and the danger of the Wimpys of this world.

Wimpy was a glutton. His personal habits were without measure or control. He wasted his time and energy trying to con others, instead of building his own wealth. He used polite and kind communication to manipulate people with his simple sentence, “I’ll gladly pay you Tuesday for a hamburger today.”

We have a lot of Wimpys in our world today. Brilliant communicators, excellent salesmen, fascinating marketing approaches, with all of the bells and whistles of technology to get that free burger today. Unscrupulous lenders, government officials who borrow billions, or the obese (in social habit) but charming con artists who prey on our society by the millions. We see this attitude coming out of Washington, D.C. in the new income tax code that already has increased the national deficit by record billions under the sales pitch, “you will get repaid by billions some day in the future.” Already, economist are seeing that it represented a “hamburger" for rich corporations and contributors to the politicians, with an uncertain promise of repayment some day, years in the future.

I heard a new con scheme that is being promoted out of Arizona and New York. Under this scheme an unwitting investor is promised millions of dollars if the investor will give cash to a company now, to buy letters of credit. This is in exchange for a gradual release of money a few years in the future, which over years will gradually provide the customer money. It is a way of getting the promise of a loan “today” (the hamburger letters of credit) for a promise of actual investment funds some day in the future. We at Global Perspectives spoke to an investor in Chicago who looked into this concept and he found that companies that are promoting this idea seldom manage to close the deal with desperate investors who cannot qualify for a standard bank loan. We see the concept of a free hamburger today for a promise of payment “on Tuesday” proliferating in hundreds of packages or forms of logic. I saw an oil deal which offered “oil wealth in the hundreds of millions” in exchange for the hamburger of millions today to pay to drill and develop. In other words, the investors take all of the risk, with no certainty of repayment.

I heard of a woman in Mississippi who invested almost a million on a land deal, and after a few months realized that it was not performing. She lost that and then invested in yet another scheme and lost more millions. She is almost broke now and never got the ‘hamburger.’ If every-day, street level business con artists were not bad enough, we see a new breed of millionaires or billionaires taking advantage of individuals and business. We have “billionaires” who have enriched themselves by putting together multi-million-dollar projects by borrowing from investors and putting inflated financial statements up as back up, then using bankruptcy laws to avoid repayment of loans. Banks, communities and investors end up holding the bag, while the “billionaire” mode of operations is to take cash out of the business early own, and then simply walk away as the investments fail and the lenders and other investors suffer the losses.

I worry that the American people and our economy are being besieged with plans foisted upon us by politicians who have upended traditional business practices with political programs that hurt our economy and hurt the majority of the American people. They have introduced a new wave of laws and policies that tend to try to do to the American people what con artists have been doing forever -- lie, oversell and enrich a few giant corporations and rich friends and let the people hold the bag as the debts and performance losses get charged to citizens in the form of taxes.

We have “Wimpy” style politicians sucking the economic lifeblood from the American economy in favor of a rich and powerful class worth billions.  That is why we believe that you should monitor values of properties.  Check out: Property Values