From the Publisher:  We have been watching for a scholarly and non-political evaluation of impacts of the tariff and trade war policies. Finally, we offer two articles, one from Bloomberg Financial reporting of a study by reputable economists and universities, and another from the Huffington Post. We give them full credit.  BBB      https://bootheglobalperspectives.com

President Donald Trump regularly declares that he’s winning his trade wars. Yet evidence is growing that the U.S. economy is a net loser so far.

In two separate papers published over the weekend, some of the world’s leading trade economists declared Trump’s tariffs to be the most consequential trade experiment seen since the 1930 Smoot-Hawley tariffs blamed for worsening the Great Depression. They also found the initial cost of Trump’s duties to the U.S. economy was in the billions and being borne largely by American consumers.

In a study published on Saturday, economists from the Federal Reserve Bank of New York, Princeton University and Columbia University found that tariffs imposed last year by Trump on products ranging from washing machines and steel to some $250 billion in Chinese imports were costing U.S. companies and consumers $3 billion a month in additional tax costs and companies a further $1.4 billion in deadweight losses.

They also were causing the diversion of $165 billion a year in trade leading to significant costs for companies having to reorganize supply chains.

Significantly, the analysis of import price data by Mary Amiti, Stephen Redding and David Weinstein also found that almost all of the cost of the tariffs was being paid by U.S. consumers and companies. That contradicts Trump’s claim that China is paying the tariffs.

“This is kind of the worst-case scenario in terms of consumers,’’ Weinstein said in an interview. “It’s pretty unclear that this trade war is a net win for the economy at this point.’’

The trade war was only one factor affecting the U.S. economy, Weinstein said, and with the U.S. less exposed to trade than other major western economies such as Germany, it was not having as much of an impact as it might.

But the numbers were still consequential, he insisted. They also did not capture all of the costs to the U.S. economy. The three economists are now working on quantifying the amount of investment that has been put on hold as a result of the heightened uncertainty caused by the trade wars, Weinstein said.

In a separate paper published on Sunday four economists including Pinelopi Goldberg, the World Bank’s chief economist and a former editor-in-chief of the prestigious American Economic Review, put the annual losses from the higher cost of imports alone for the U.S. economy at $68.8 billion, or almost 0.4 percent of gross domestic product. 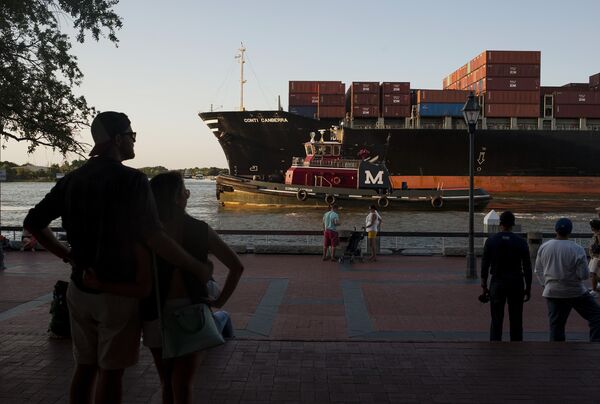 A cargo ship at the Port of Savannah in Savannah, Georgia.  Photographer: Ty Wright/Bloomberg

That was offset by the gains from protectionism derived by U.S. producers benefiting from the tariffs, the economists found. After accounting for the impact of higher tariff revenue and the benefits of higher prices to domestic producers the study found the aggregate annual loss for the U.S. economy fell to $6.4 billion, or 0.03 percent of GDP.

The study by Goldberg, Pablo Fajgelbaum of UCLA, Patrick Kennedy of the University of California, Berkeley, and Amit Khandelwal of Columbia also found that consumers and U.S. companies were paying most of the costs of the tariffs.

But it also went a step further: After factoring in the retaliation by other countries, the main victims of Trump’s trade wars had been farmers and blue-collar workers in areas that supported Trump in the 2016 election. 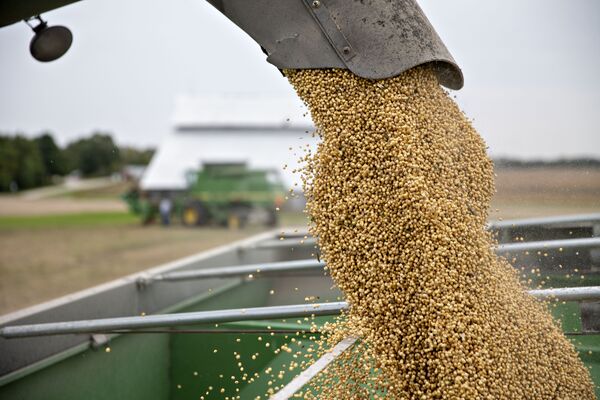 Soybeans are loaded into a grain cart during harvest in Wyanet, Illinois.

The studies are the most authoritative yet to document the negative effect of Trump’s tariffs on the U.S. economy, though others have shown the negative consequences. Economists at the Institute of International Finance last week calculated Chinese retaliatory tariffs alone were causing roughly $40 billion a year in lost U.S. exports.

Official trade data due to be released on Wednesday also are expected to show the U.S. trade deficit in goods with the world hitting a new record in 2018 because of the combination of a surge in imports to get ahead of the new tariffs last year and slowing exports.

A spokeswoman for Trump’s Council of Economic Advisers declined to comment on the new papers and referred inquiries to the office of U.S. Trade Representative Robert Lighthizer. Spokespeople for USTR did not immediately respond to a request for comment.

In a speech Saturday to conservative activists Trump dismissed criticism of his tariffs and boasted that he was simply following what he argued was a glorious history of using import taxes in American history.

“I found some very old laws from when our country was rich -- really rich -- the old tariff laws. We had to dust them off. You could hardly see, they were so dusty,” Trump told the Conservative Political Action Conference.

At a minimum, Trump said, tariffs were “the greatest negotiating tool in the history of our country,” pointing to talks now underway with China which appear increasingly likely to result in a deal in the coming weeks.

“Overall ... we find that the full incidence of the tariff falls on domestic consumers,” report says.

The U.S. “experienced substantial increases in the prices of ... goods, dramatic changes to its supply-chain network, reductions in availability of imported varieties, and complete pass-through of the tariffs into domestic prices of imported goods,” noted the study issued Saturday by economists from the Federal Reserve Bank in New York, and Princeton and Columbia University.  “Overall ... we find that the full incidence of the tariff falls on domestic consumers.”

The trade war also cost companies an additional $1.4 billion a month in efficiency losses as they changed the way they do business to adapt to the tariffs, such as cobbling together new supply chains, according to the study.

Author David Weinstein of Columbia University told Bloomberg: “This is kind of the worst-case scenario in terms of consumers. It’s pretty unclear that this trade war is a net win for the economy at this point.’’

Trump has said negotiators are very close to an agreement with China and a deal could be wrapped up later this month.

The president, who has insisted that “trade wars are good and easy to win,” has bragged repeatedly that even as trade negotiations have dragged on, China is paying the U.S. “billions of dollars in tariffs.”