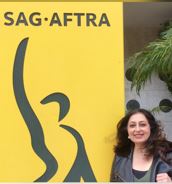 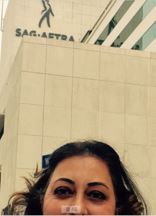 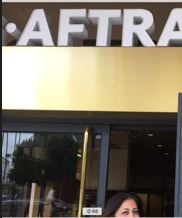 SANEH BOOTHE DISCOVERED SOMETHING IN CALIFORNIA, AND IT IS A GROWING NATIONAL TREND

Saneh Boothe travels the world. Recent trips have included Cuba, Dubai, Peru, Ecuador, Abu Dhabi, St Croix and Costa Rica. She works to meet movie makers, authors and movers and shakers who are making a difference in this world.

In Costa Rica, she and her husband, Ben, spent a couple of days with Depak Chopra (named one of the most influential men in the world).  Over a meal, he counseled Ben and Saneh:

"Encourage people in your world, your industry. Teach them to build up, not destroy. The world is full of dividers, protestors, screamers ... offset that by doing positive and kind things."  Saneh had that in mind when she later visited Los Angeles. She was there to meet with a movie producer and an agent specializing in "voice overs" for radio and commercials. While there, she also visited the national headquarters for SAG-Aftra (the Screen Actor's Guild, the largest actors union in the USA).

"I was delighted to find a group at SAG that was very interested and involved in encouraging DIVERSITY," Saneh told Victor Waumett of Big Sky Voices You tube, a program series that interviews exceptional people with something positive to say.

Saneh explained that while the general consensus on diversity by most people was to provide greater opportunity for women and black actors, SAG people with Saneh explored a much broader concept of DIVERSITY. Saneh, participated in a conversation to consider diversity in a much broader and more important perspective -- cultural diversity." Saneh, an actress from Persia (Iran) was a perfect example of this broader diversity concept. It is not limited to race or gender, rather it entails an entirely new world of creating respect, tolerance and acceptance of people from other nations and cultures and allowing their unique talents, backgrounds, histories, music and imagination to enrich the movie creative process in America.

"In California, movements like 'Me, too' and others often hit the headlines for a few months and then tend to die down," Saneh said. "The subject of DIVERSITY is a powerful and long-term movement that will have a huge impact on the movie and creative arts. Indeed, SAG AFTRA is considering a national vote to create a broadened category of diversity groups called 'Middle Eastern,' which reflects the increased investment, interest and audience for those with Middle Eastern accents, cultural background, and 'look.'  Several of the largest investors in film companies in the USA are from the Middle East. We are seeing the day when our biggest banks and some of our biggest movie production studios are owned by Middle Eastern investors," Saneh said. Then she smiled .... "They like my look."

So Saneh Boothe went from California back to New Mexico, with a new dream.  Soon she became a member of the Board of SAG AFTRA, New Mexico and is now Chairman of the Diversity Committee for SAG in New Mexico.

"I was a panel member of the Santa Fe, Film Festival on the Subject of Diversity, 2 years ago, and again this year, and we had a room packed full, with media and the press." Saneh said.  We later did a Diversity Panel, at AFME in Albuquerque, and then we conducted a special meeting and I, was the Chairman and organizer of the venue located near the University of New Mexico.  We had a marvelous program, and one participant said it was one of the most practical and helpful panels for actors he had ever attended."

Saneh has been a powerhouse, doing talks and auditions, preparing a public service announcement and working on a book. She appeared with Tina Fey in the film Whiskey Tango Foxtrot, by Paramount Movies, and they used a scene played by Saneh in their national promotion of the movie. 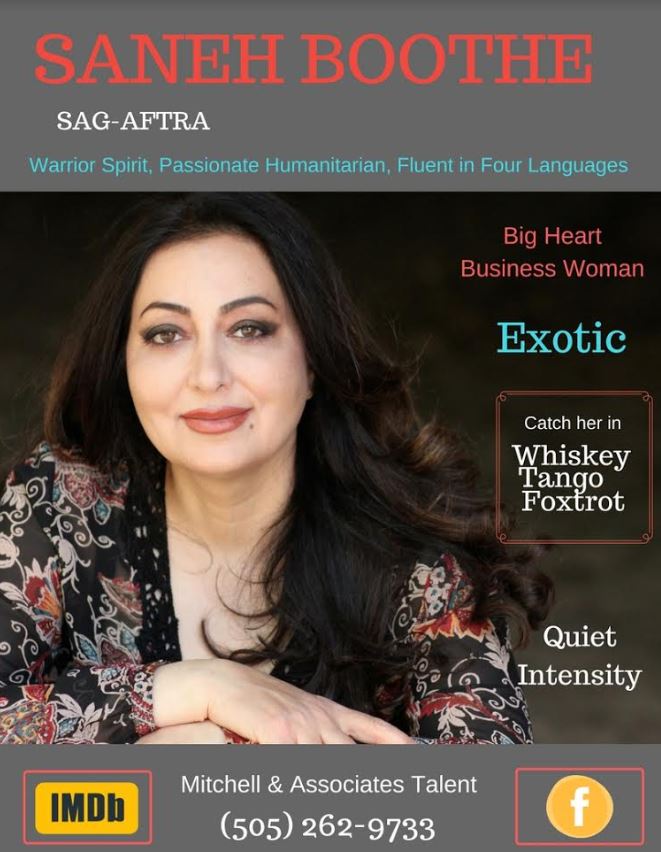 "I got over 1.2 million hits to our site that had that promo," Saneh said. She has had movie studios call her from as far away as India, and she was part of an on-site filming in White Sands, New Mexico, produced by an Indian movie maker. "It was about a family running across the desert, trying to escape terrorists. There were gun battles, helicopter and chase scenes. The director told me that he was going to feature my scenes, because they added so much emotion and energy," Saneh said.

Saneh has done commercials, participated in directing a project about health care needs for Native American children, and a number of TV internet movies." She was featured in two scenes of "The Brave," a mini series that ran 12 episodes and attracted good reviews. It was filmed in Albuquerque.

At a recent SAG AFTRA meeting, Saneh was named for her many projects, panels and presentations and was asked to organize another SAG AFTRA program on diversity in the next year.

For the past two years, Saneh helped the Native American Pueblo Cultural Center (19 Pueblo tribes) to develop their outreach for more Native American movie makers and actors. "We have developed a dynamic Native American film festival that is bringing in and developing more and more talent from Native American producers and film makers," Saneh told us. "I am proud to be a volunteer and associate in working with these great people," Saneh said.

Saneh has been studio producer for 30 blog episodes and a co-host for 70 programs aired as "Venus and Mars." That program built an audience of several hundred thousand viewers. "We stopped producing those several years ago, and still have repeat viewers," she said.

"I have been asked to participate in a working project as an 'Indian,'  and another project as a wise pawn shop owner who knows where the bodies are buried," she said. Both of these are aiming for release in 2018. Saneh's book, a young adult drama set in Iran's Revolution, is well underway, and she has been approached about turning this into a screenplay.  So Saneh is a very busy lady these days. 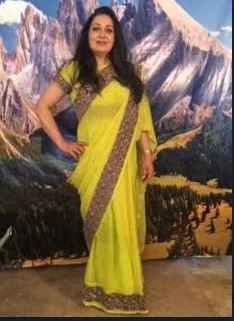 "I love going to California to pick up the latest on trends and new concepts. It also tends to help me see that some of our organizations' efforts 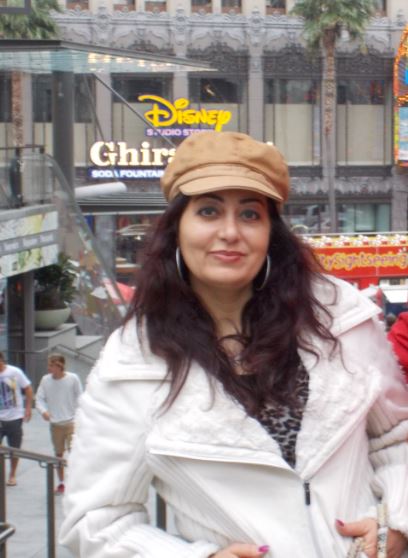 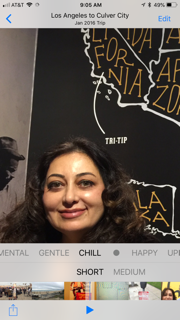 can fall behind the times or get stuck on negatives when they should be progressing and pressing for positives," Saneh said. "It is an honor to try to listen and be kind and compassionate to people who come from DIVERSE backgrounds, and then to introduce them to good and real people who can help them in meaningful and practical ways. That is my main goal, to be a better actor, a better human, and a friend who can really help others in our industry."

"MY FOCUS IS TO TRY TO BE HELPFUL AND ENCOURAGING. TO GIVE PRACTICAL ADVICE TO HELP POSITIVE AND HARD WORKING PEOPLE IN THE MOVIE INDUSTRY FIND SUCCESS AND FULFILL THEIR DREAMS," Saneh said.

It is no wonder that her phone is constantly ringing from newcomers and actors who want advice or to be pointed in the right direction.

"Some people seem to come to New Mexico just to gain personal power or to create negative issues. I believe that we should be encouragers, builders, and people who lift up and boost others, however we can. Whether they are an Indian, or an Afghan, or an Iranian, or whether they are midgets, or fat, or whatever, DIVERSITY means mutual respect, tolerance and acceptance and then giving people wings to fly," Saneh said.

Saneh opened a Facebook account in Iran. Within just a couple of weeks she had thousands of new followers, most of them young people in Iran.

"It was amazing. I know that I have not achieved a huge success by U.S. standards, but the kids in Iran think of me as someone who got out of the fury of the revolution there, came to America, and actually have been in some movies and TV in America."

Saneh's Facebook account was so successful, and aroused such attention, that the government there shut it down.

"Those kids there, they think I am a hero. I want to be a good example to them and to encourage them, especially girls, who have often been held back, to find their dreams and achieve them!" Saneh said with a tear in her eye. It is no wonder that she wants our people in the movie industry "to be positive encouragers and never put someone down who wants to try to achieve."

"If I can encourage those young people to fly like eagles, my life will be a huge success for me," Saneh said.