The Little Red Pepper (A Tale About the Chili Star)

By Ben B. Boothe, Sr. (writing for the Chili Star)

I grew up on a farm in Mexico, and I remember how excited I was on harvest day. I had been growing and hanging around my pepper plant for months, and I was ready for a change of scenery.

First I heard the rumbling, and then I saw them! Trucks roared up, kicking up dust on the farm road to our farm. They screeched and rattled to a stop, and workers with Mexican sombreros poured out into the fields, picking us one by by one with their big calloused hands. Those hands were my way out of here, and so I welcomed the sight of them.

Oh, how I wanted to be picked. The last thing I wanted in life was to be left hanging, dried up on an old dead pepper plant.

I had heard that the lucky ones that were picked got to ride in a truck all the way to the United States, and there they might go to a farmers' market or a big supermarket. The story was that supermarkets were air conditioned and actually had music piped into the store, so you could listen while you sat on the counter shelves. What a life! From there the most special thing we peppers talked about was being chosen by a great chef of a fine restaurant and to be a “Chili Star.” Think, to be called the "brightest" or "hottest pepper" in town! That would be true glory, true stardom.

But at that moment, I was just another pepper hanging around. Just hoping I would be one of the lucky ones to be picked. I often wondered if it was just luck to be picked, or if we really were picked because of our natural talents -- our bright complexion, or our curves, or our shapes. Sometimes we thought that if we were too fat, or too skinny, we would be rejected. But others said it was just the mood of the picker, or even just luck! But I didn't want to take any chances. I tried to watch how I curved, not too much but not to little. I tried to be bright and welcomed the sunshine to help me become redder. Humans, I had heard, like to lie in the sun to get brown. Me, a pepper, I wanted to be bright red! And I didn't want to be a big fat round pepper. I wanted to be just stylish and tempting, but not so fat as to lose my appeal! It is sometimes beyond the imagination of humans to know all the things a chili pepper has to worry about to be attractive. But the ultimate compliment was to be a "hottie." I wanted to be the hottest red pepper in town! I wanted to stimulate and sting the taste buds so much that I would always be remembered, as "the hottest one."

But for now, on this day, all I could do was wait for one of those pickers with the calloused hands to come to my plant.  I tried to look my best for the picking. 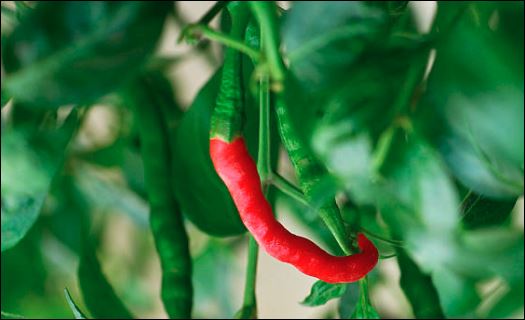 I had a dreams! Goals! If I could just achieve them, I would be the happiest little red chili pepper on Earth! So you can imagine my disappointment about what happened next. When the worker came down my row, picking with both hands, he seemed to hardly notice me. His rough calloused hands pushed the branches aside and hid me from view. I tried to scream, but I didn't have a voice; but with all my power I sent him thoughts: "I'm prettier than that one! I am hotter than the one you just picked! Look at me! I am not skinny or wrinkled or fat, but you ignored me! Look at me and smile, tell me you like me, please don't leave me here!" 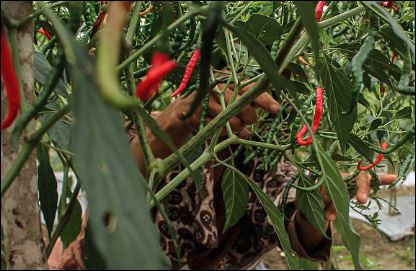 He picked my friends and squeezed them into a giant handful and put them in the bag hanging from his belt. He hardly gave me a second glance. He didn't say "thank you," or "you are nice," or even "we appreciate all of your time and effort." He just rejected me. Then he left, and my chance was over, just like that. He never seemed to stop walking as he moved on to the next plant, and there I was, alone and unpicked. A little red pepper chili tear ran down to my little pepper point. I was devastated. I had worked so hard to be pretty, red, the proper shape, and even to have perfect curves. I was left there hanging as if I were insignificant, not even worth a kind word. Pepper tears ran down my point so hard, the sun noticed. 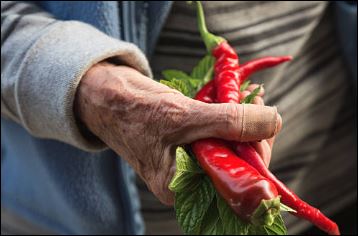 But as fate of circumstance often works (or was it a kindly sun above?) one of my tiny tear drops reflected a ray of sunlight from my pepper tip. From two rows over the bright sparkle of light caught the eye of a young child who was working the field along side his grandfather. They weren’t walking fast, indeed the old man took small steps and his wrinkled hands worked slowly and gently plant by plant, never tearing a leaf or breaking a branch. The little one seemed to love helping his grandfather by picking up the peppers his 'abuelo' dropped.

“Look there mi abuelo, a light shines from that pepper plant!" the little boy said.

“When a pepper calls, you must answer,” the old grandfather said. “Perhaps a greater fate demands your help,” the old man said, almost to himself as he gently put his hand on the boy’s shoulder and gave a little push toward the shining plant.

I saw him coming through my tear blurred eyes and then felt his tiny tender hands pulling the leaves aside.

“Abuelo it is the brightest red and the tip has a tiny drop ... like a tear drop. It shines like a jewel in the sun,” the child said to his grandfather.

Grandfather said, “Then, my child,  it is a special one, handle it with care and kindness ... for a pepper tear is a powerful thing, destiny is upon it.”

When the little boy picked me, his touch was soft. He didn’t twist or bruise me, he snapped me from the stem in a painless gesture and smoothly slid me into his little pocket. I was so excited, my sadness turned to joy when I heard him and the old man talking.

“This pepper has an exceptional red color, a lucky chef in the USA will be proud to decorate a dish with it,” I heard Grandfather say, and my tears turned to joy. I had been found. I had been chosen. My life's goals and failures had been redeemed! How quickly life seemed to change!

"I bet it is the hottest pepper ever" the little child said. 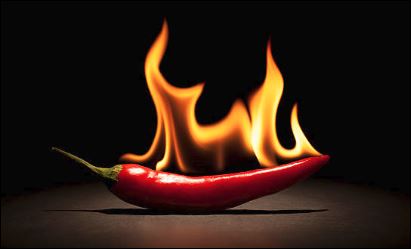 Those words kept me happy on "cloud nine" on the truck ride to the USA, to the big market in Fort Worth, to the early morning when a chef's food buyer saw me and selected me for his restaurant. He said it was called “The Mongolian Grill.” He put me in a box with carrots, onions, garlic and other vegetables he had bought at the farmers' market. All in the box were excited and talking rapidly. Some of them had different accents, but I could feel their enthusiasm. I understood enough to know that they knew of the Mongolian Grill,  I really felt like "hot stuff." I was so happy, but very curious.

I could not wait to get there.

“What is Mongolian?” I wondered, and I had many questions.

“Grill -- is it a nice place or just a street vendor?”

“Is it in a nice part of town, or a place with dusty old streets?”

When we arrived at the place, I was astonished. It was a big, shining restaurant building next a mall and near a theater. We were carried inside, and the air was cool, there was music playing, and tables were full of people eating and laughing. What a fine place.

Inside, people were standing in a long line to fill little metal bowls with all kind of meats and vegetables such as mushrooms, onions, bean sprouts, and yes, peppers! Big green jalapeños, little tiny red hots, bell peppers and red peppers like me. Some had a little green in them, some were bruised, some were slightly crushed. Some were wrinkled, and some were not shapely. Some were too fat! But when the cook saw me he said, “What a perfect beauty, and it is the prettiest red.” He put me atop the pile of red peppers. I felt like I was the king pepper, the top of the mountain.

People stacked food in their bowls as high as they could. Then we were placed on a counter where the cooks would take us and pour us onto the cooking grill. The man who selected me balanced me atop the pile on his bowl, but when he put my bowl on the counter, I fell off. I lay on the counter for hours as every bowl passed me by. I wept, for my dream was lost and I feared that I would just be swept up as garbage at the end of the day.

But a family, a man, wife and daughter came  by, and the man said, “Look, a pretty red pepper on the counter, it must have fallen off of someone's bowl.  It is a beauty!" He picked me up with his fingers and he put ME in his bowl.”

I was cooked until I had a brown streak down my red side, and then the most astonishing honor came to me. When my cooked dish was served at the table, the man took one look and pulled me out of his dish. The wife said, “What are you doing?”
“This pepper is too beautiful to eat. I am rescuing it,” her husband said.
“For what?”
“To hang high in my business office. I want to show it to all my friends. The exceptional little red pepper.”

Now I hang in a nice air conditioned office. Important people admire me and hear my story ... the incredible journey of how after I had been rejected by those who first should have loved me, how "Father Sun" shone on my tears, and how the reflection was noticed by a little boy whose grandfather encouraged his grandson to appreciate me. How I was admired by a buyer and a cook of a fine restaurant and given my chance to display my beauty. And how I was rescued by a compassionate businessman who took me to his office to share my story with all his associates, and how I got to hang in an air conditioned room and perform for all who come by. Now, you humans may not understand the goals, the drama, the hopes and dreams of life such as I had. But, then again, perhaps you will get it. I hope my little pepper story is an encouragement to you. Be the "hottest" and "brightest" you can be. Be true to yourself.

What a life I have had! Pepper perfect! Some people wonder why there is an upward curve when I sit down. It is my smile!