A Trek to Sandia Cave, an Ancient Environmental and Historic Site 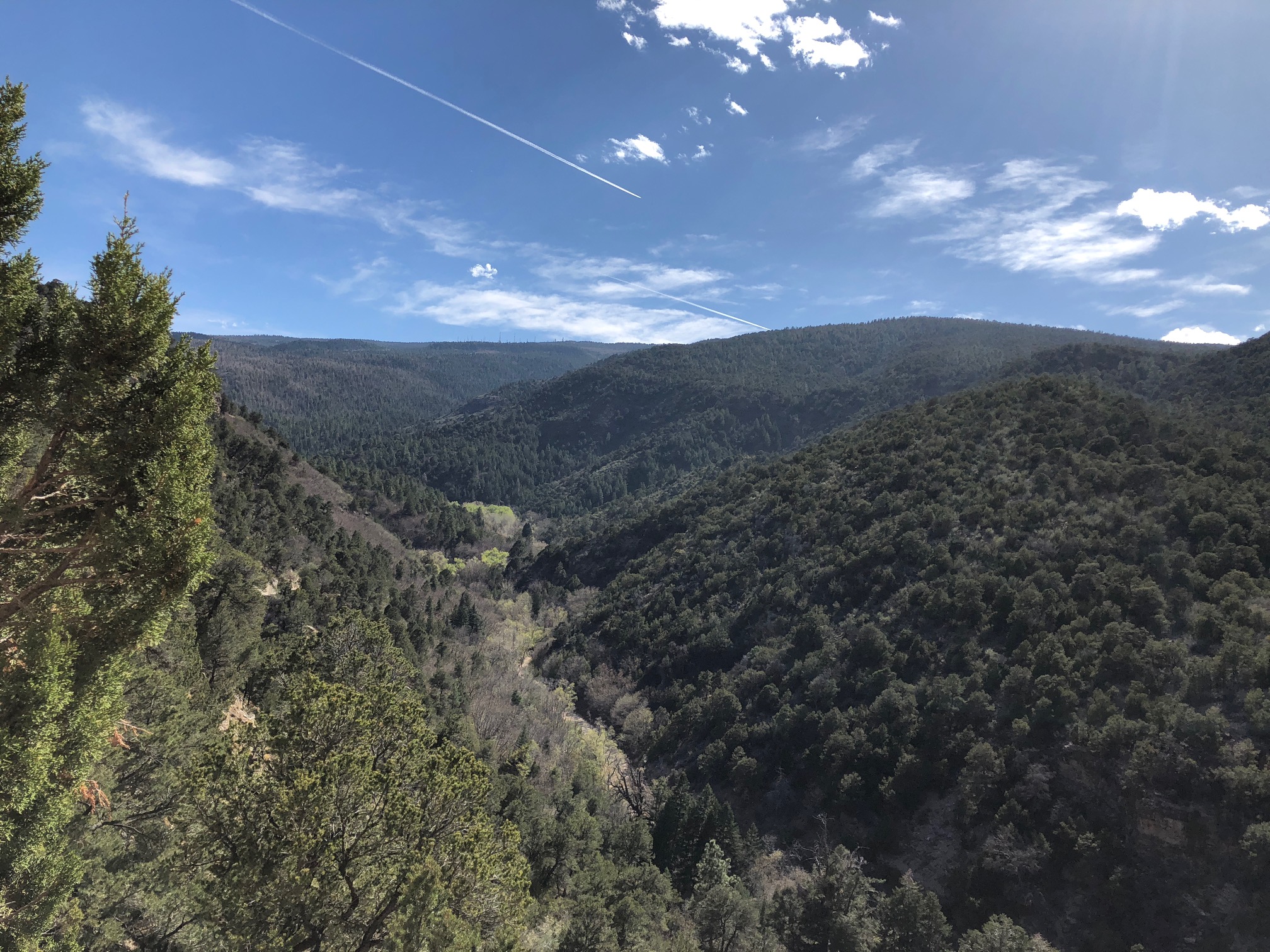 Imagine ancient Indians living in a cave, with no electricity, no sewer, and only running water from a stream 300 feet below the cave opening down a sheer cliff. Talk about living in a way without harming the environment, the Sandia Cave (formerly known as Sandia Man Cave) could be instructive. It is located in the Sandia Mountains near Albuquerque, New Mexico. The area was not developed because for centuries it was considered Sandia Pueblo Indian land, but then the U.S. Forest Service claimed it and it became an area of "wilderness." But this spot on the east side of Las Huertas Canyon has obviously had humans living or visiting it for many years, perhaps centuries. We include it in the "environmental" section because it is in such a pristine and beautiful setting. From the mouth of the cave one can see the mountains near Santa Fe, and the Sandia Pueblo tribal lands are almost due west over the Sandia Mountain ridge from the cave, which is just a few miles northwest of Albuquerque as the crow flies.

The photo shows a view north toward Santa Fe from the mouth of the cave. 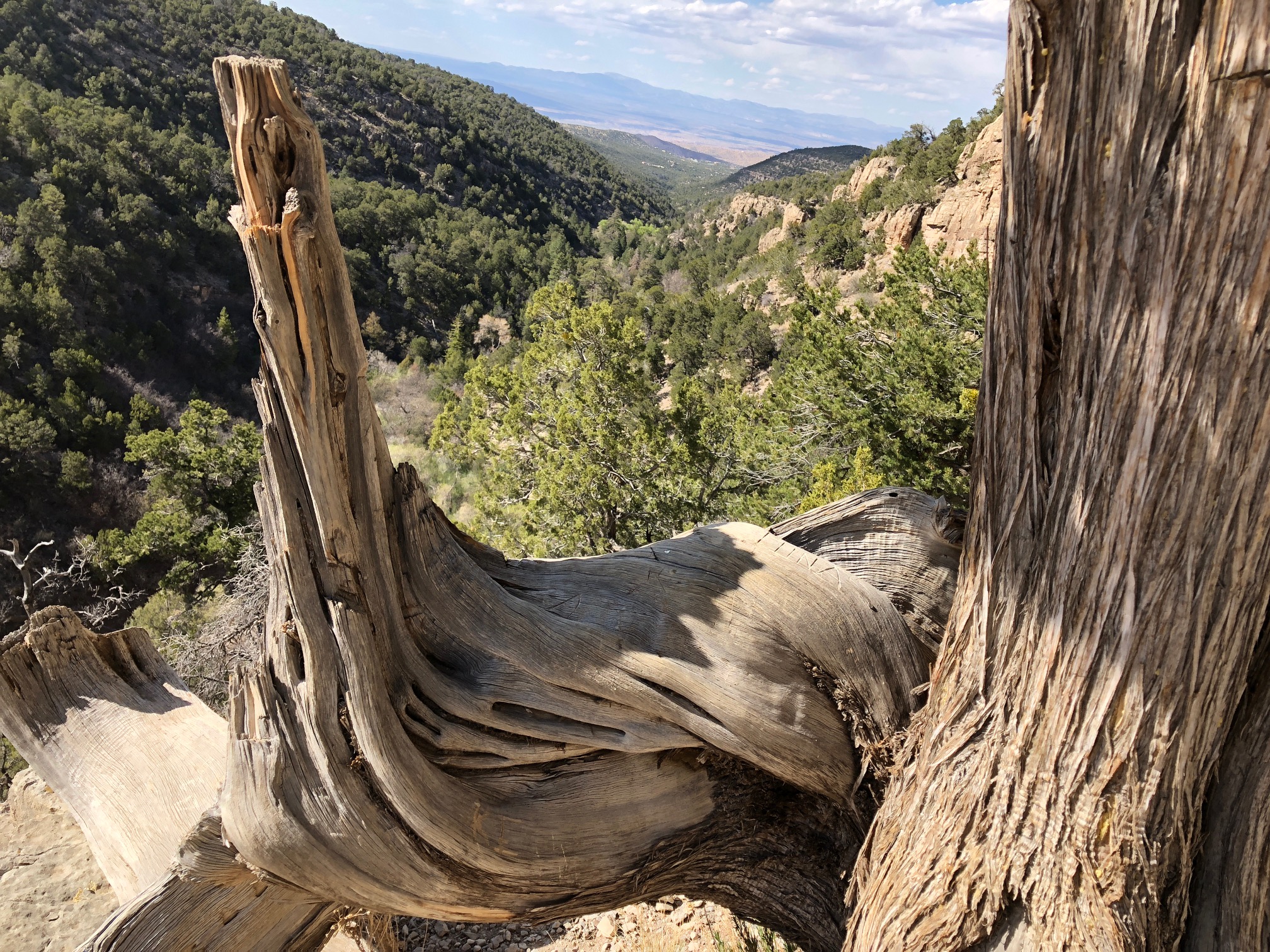 In 1937, Frank Hibben of the University of New Mexico discovered the Sandia Cave. Hibben was colorful, and to generate interest and enthusiasm for the site, he told exciting and glamorous stories about New Mexico and about "Sandia Man Cave." His culture was not much different from that of the days of the 1930s when New Mexico was considered the world's center for turquoise, silver, gold, lithium and coal mining. Just a few miles east of this cave was the largest turquoise mine in the nation, and there was a very active lead and silver mining center around Cerrillos. Madrid had developed a coal mining center and brought the railroad into that area just to ship coal and mining products out. So the area tended to invite enthusiasm and tall tales of promise and opportunity in those days. These mountains had been considered a sacred part of the Sandia Pueblo for as long as records exist, and Hibben reported that the cave, 300 feet long and deep into the mountains, showed evidence of ancient human occupation. 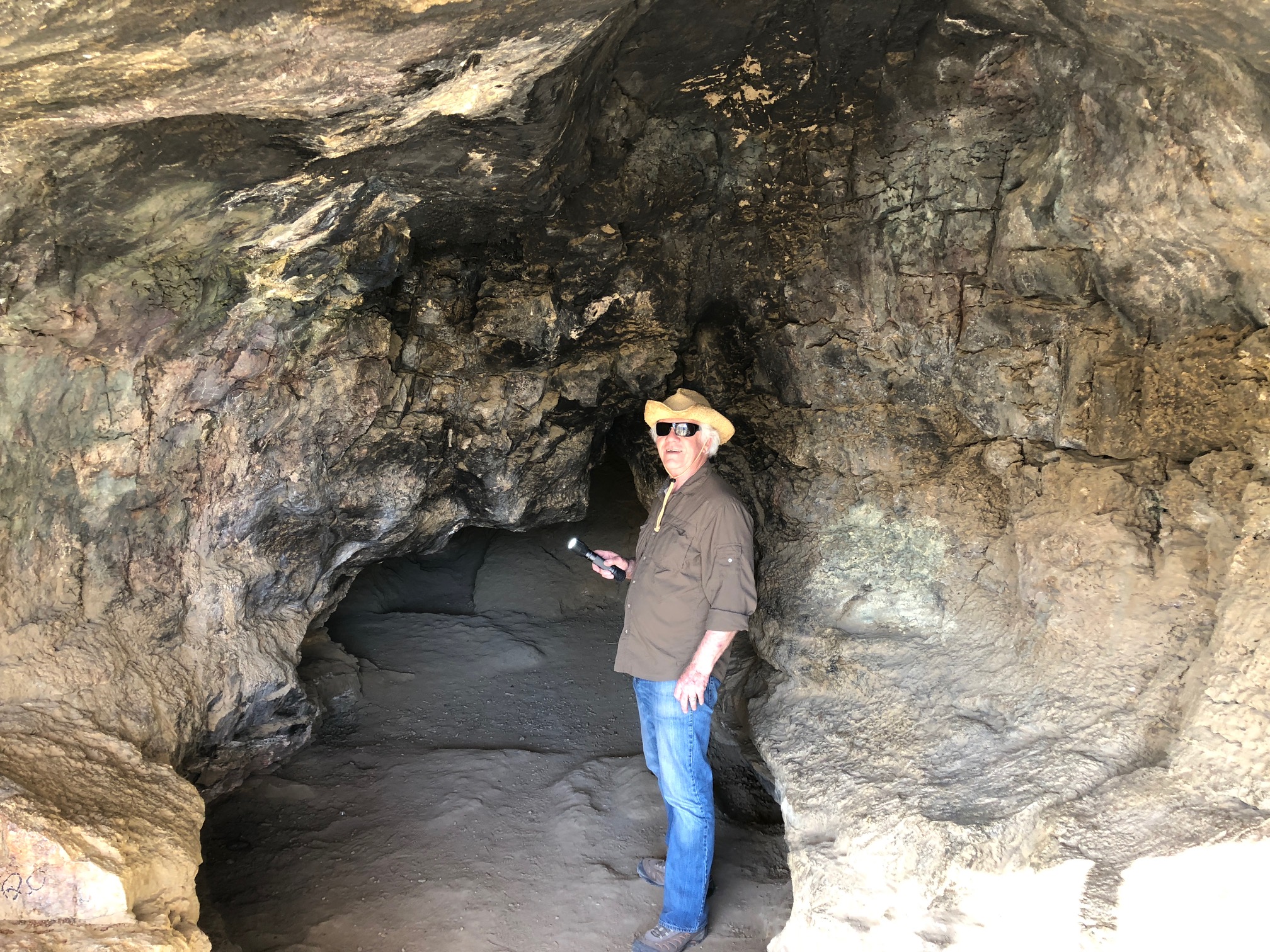 At one time it was said that this location might be the oldest site of human habitation in the United States. Artifacts Hibben recovered during his many excavations included stone tools, flint points, remains of animal life as far ranging as buffalo, horses, camel, mastodon, and even some huge bones he thought belonged to a dinosaur. Hibben left a legacy and a building filled with his research and many of his findings on the west side of the campus of the University of New Mexico.

In the 1960s and years thereafter, scholars from other universities criticized his methodology and conclusions. But no doubt by the late 1960s and 1970s, archeological methods and standards were greatly changed from those of the 1930s. Dr. David Stuart of UNM, who knew Hibben, said that Hibben may have exaggerated in his stories, but that all that he reported should not be discounted. The history is interesting, and so Ben Boothe and Victor Wuamett decided to locate and pay a visit the ancient cave. Our interest was more historic and cultural than archeological. We were interested that the presence of the cave has a historic and cultural impact on this area. In producing the BigSkyVoices interview series, we thought we might consider some of the voices of the ancients and at least visit a place where some of them are known to have lived centuries ago. "To think we walked in the same rooms, touched the same stone walls, and enjoyed the same view they enjoyed in their daily lives, it was like being in a time machine to attempt to imagine their perspective and how they tried to live in harmony with their world, nature and their idea of God," mused Ben Boothe.

We found it easier to locate than we anticipated, and the hike up to the cave was pleasant and scenic. But it is a rough trail with loose rock and no hand rails, and you must be cautious. Watch your step!  No doubt one must have good hiking shoes, a hat against penetrating sun at altitude, water, an attitude of caution (the trail leads along a sheer vertical cliff and has no guards or hand rails except near the steps) and a good mental focus. Ideally if you go into any cave, bring a rope and always a back-up associate. Break a leg or sprain an ankle and you would have a problem.

Views from this altitude are lovely, and entry into the cave, which is situated in a sheer cliff, is via a metal circular stairway that was put in place many years ago. The site does not appear to have a large volume of visitors. Environmentally the cave overlooks the Los Huertas Canyon and a stream running far below. A cool breeze comes up from the cave, leading us to believe there is another entrance to the 300-plus feet length of the main cave. We observed several openings along the cliff side that could be other caves that conceivably might connect with a network, although we did not have equipment to do a thorough investigation.

What we did conclude is that this is a special site, and that no doubt people have come and gone from this place for a long time. The ceilings of the cave were blackened by years of smoke from fires near the mouth of the cave, and the spot captured our imaginations as we thought: "Near water, perfect shelter, protected from invaders." Indeed, we looked for carved or man-made steps or trails that would lead to the mouth of the cave, but did not observe any. We guessed that perhaps the tribal ancients used ladders of wood and fiber to access the cave. It would be a fun project to pursue and research. If there are other connecting openings discovered in the future, the site could have huge appeal and interest.

We invite you to look at our fun video of our "outing" and hope it makes you smile and tweaks an interest in the ancient history of this area.