Montesquieu was an important voice in defining a philosophy of SEPARATION OF POWERS. His philosophy is important to the United States of America today. 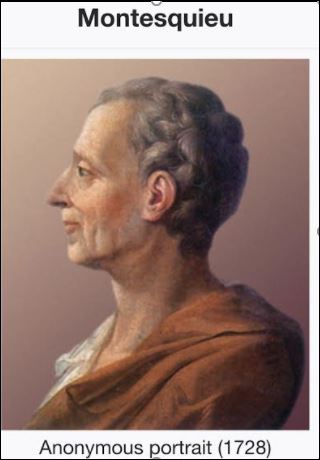 From time to time I write about historical voices, because we should learn from history lest we repeat it. My attorney friend Charles Gurd reminded me of Montesquieu.

Montesquieu’s influence came at a time when kings and wealthy aristocrats typically had forced their policies and views upon France. The old adage, “gold makes the rules” was very true then, for the rich and powerful tended to force their will on nations and peoples. Unlike today in America, the wealthy and nobility were often some of the best-educated people in the country. In America, we have a large segment of wealthy people who largely have missed out on higher education. But in France, in Montesquieu's day, the "common" people, the workers, farmers and merchants were restless and sought change. Montesquieu helped define the system that we today have enjoyed for almost 300 years. The system has been successful at limiting the power of tyrants, but some tyrants rise and try to test it, or "game" the system. Read on and see what I mean.

Montesquieu believed that there should be three branches of government.

He pointed out that each of the three should have separate powers and be independent, and none should dominate the other. This was his protection against dictators or wealthy men of power seizing a nation.

He felt that the executive branch was important for practical reasons of “practical dispatch of things,” but that the power of government should be a balance of all three branches of government.

Montesquieu’s book, "Spirit of the Laws," was influential and still has powerful guidance for us. Many law students study him. Other great people have "borrowed" some of this ideas, and not always appropriately. For example, when Catherine the Great wrote her instruction to the Legislative Assembly to clarify the existing Russian law code, she had to discard and alter portions of Montesquieu’s book, because it did not support Russia’s absolutist bureaucratic monarchy.

No one branch of the government, according to Montesquieu, should dominate or have more power than the other two.

“When the legislative and executive powers are united in the same person or in the same body of magistrates, there can be no liberty …. lest the same monarch or senate should enact tyrannical laws to execute them in a tyrannical manner.” They would make laws, tax laws for example, that would enrich themselves.

He then emphasized this with another statement:

Montesquieu then gave an ominous warning:

Just think of it, leaders relying on virtue. Many of us miss that in government. Montesquieu, Franklin, Jefferson, Washington and virtually every president elected in US history believed in virtue, morality, honesty and truthfulness. Ah, but something has changed in 2017-2018 in the USA.

In these days, in the United States, many 'conservative' church leaders and pulpits have copped out in the heartland by saying, "We don't care if our leader is corrupt, or if he violates the basic tenants of morality, if we like his political actions."

They support political actions such as cutting medicare, medicaid, social security, education funding for the poor, financial aid to farmers, medical aid to soldiers and veterans, food stamp aid for the hungry. Cutting jobs programs for the unemployed. Gutting scholarship programs for kids who otherwise can't afford to go to college. Those are called "policies" that the Christian right in America doesn't seem to consider immoral behavior. Thus they create a false justification for supporting an immoral politician.

During the days of Montesquieu, the rich and powerful nobility were gradually losing their influence.

He also taught in his Persian Letters that “climate may substantially influence the nature of man and his society.”  He believed that the environment influenced conditions of life. He also thought that climate created environments that impacted the economies of countries.

He wrote 23 important books or other works that have some ideas that we might consider relevant today.

Think of Montesquieu when you catch the odor of a trend toward running a nation by fear, tyranny or lack of virtue. And be thankful that we have three branches of government. They keep one branch from rolling over and crushing the other two branches.  If that ever happens in America, it means the “rolling over” the people.

From his Persian Letters, we quote the story showing how leadership of a nation can impact the people.

“Once upon a time there dwelt in Arabia a small tribe descendants of the ancient Troglodytes, who, if historians are to be believed, were liker beasts than men. They were not, however, counterfeit presentments of the lower animals.

*They had not fur like bears; they did not hiss like serpents; and they did possess two eyes, but they were so malicious, so brutish, that they lacked all notion of justice and equity.

"A king of foreign origin reigned over them. Wishing to correct their natural wickedness, he treated them with severity; but they conspired against him, slew him, and exterminated his line.

"They then assembled to appoint a governing body. After many dissensions, they elected magistrates. These had not been long in office, when they found them  intolerable, and killed them also.

"Freed from this new yoke, the people were swayed only by their savage instincts. Every man determined to do what was right in his own eyes; and in attending to his own interests, the general welfare was forgotten.

"The unanimous decision gave universal satisfaction. They said: 'Why should I kill myself with work for those in whom I have no interest?  I will only think of myself -- how should the welfare of others affect me?'

"I will provide for my own necessities; and, if these are satisfied, it is not concern of mine though all the other Troglodytes live in misery.”