PLASTIC FLOATING IN OCEANS COULD TAKE 100 YEARS TO CLEAN UP

Take a vacation to the Caribbean, and you may see this, a five-mile-wide floating sea of plastic bottles, garbage and plastic. "How did it get there?" I thought that when we throw plastics into the garbage, it was gone. I was wrong!

People, ships, villages, cities, states and even countries often just let plastics go into the ocean. As a result, the sea bed and the surface and water in between is polluted with tiny particles of plastic. Some plastics do not break down or deteriorate for years, or if they do break down, micro particles are taken in by every form of ocean life. Ultimately the plastics and garbage, if not consumed by fish, float to the bottom and there coat and pollute the ocean floor. The long-term effects are simply horrifying, to the point that many scientists don't even try to predict the ultimate damage to our world and ocean floors and waters.

Under lab conditions, sea life of all kinds consumes, absorbs and often dies of this plastic garbage.  The impact upon the oceans is so great that it cannot be estimated, except we know that it is harmful to everything in the food chain.

But it is not just in the Caribbean.

Look at these global maps below. It is in the Atlantic between New York and London, in the Pacific between Japan and Los Angeles, and in spots round the globe, some 50 to 100 miles across.

Some companies are making "plastic" food containers that are not plastic and dissolve in the ocean. Some companies are banning plastic containers all together. Sweden, Norway, Great Britain and other nations have taken steps to reduce the volume of garbage put into our ocean, but medical and scientific labs are finding that plastics and micro-particles of the garbage in our oceans are found in the fish we eat, and impact health of fish and human consumers.

This is an issue larger than any one nation, and even with a world-wide effort, some scientists believe it could take 100 years to clean up our oceans. 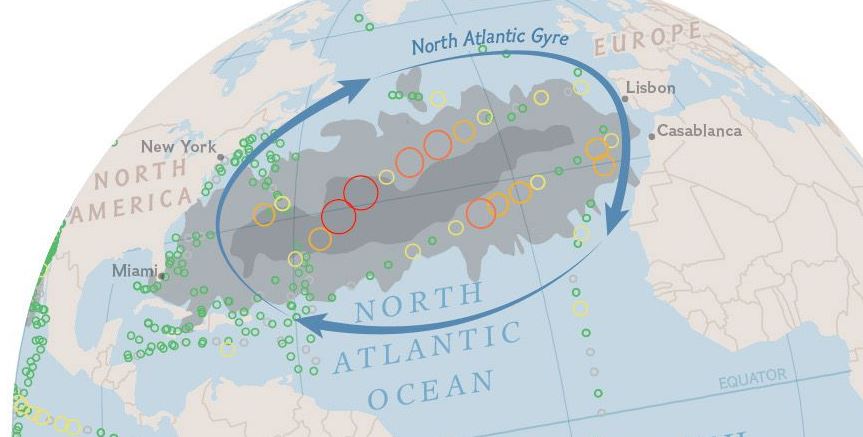