STABILITY IS WHAT THE USA DESPERATELY NEEDS FOR ECONOMIC GROWTH

Economic stability is something that brings confidence and which defines credit ratings, interest rates and the willingness of other nations to invest in our bonds and our nation.

The economic stability of the USA, the resilience of our people and our industry has been a bulwark of the reason the USA is the strongest economic power in the world. Franklin Roosevelt said it best:  “The only thing we have to fear is fear itself.”  Economic stability does away with economic fear. That is why people, companies and governments have for decades invested in the American dollar and American bonds in times of uncertainty. That fact alone saves America billions of dollars, because when other people invest in the USA, the use of the American dollar creates an economic benefit to our nation. But from the viewpoint of an economic adviser, it seems that things are changing, and those changes have critical economic impacts upon the USA.

Consider if you were the president of a giant company with thousands of employees. We all know that basic business leadership and management needs predictability. How can one make a decision to build new factories, hire new people, raise wages -- without some confidence in inflation -- in the future? One does not expand to invest or hire, if there are not predictable trends. Many economists and business leaders are cautious because we have rarely seen a time of such change, and often thus take a wait and see attitude. When I was a student at Harding University decades ago, our economics professor, Dr. Humphrey, said:

"A fundamental thing every corporation, every business, every family needs from government is stability and predictability."

"Because business and investors and planners must have reasonable predictability and confidence in the future, otherwise they cannot plan, will not grow, hire and invest." 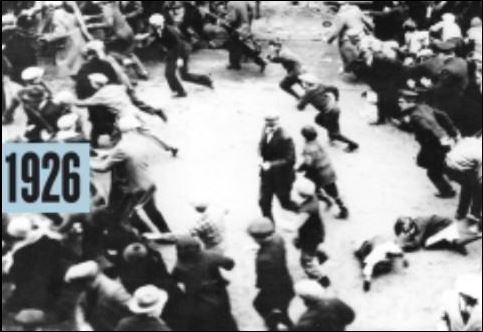 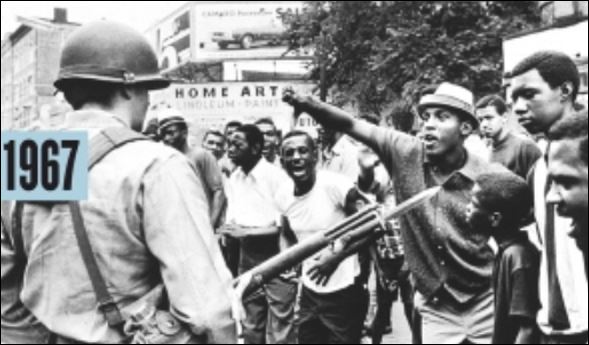 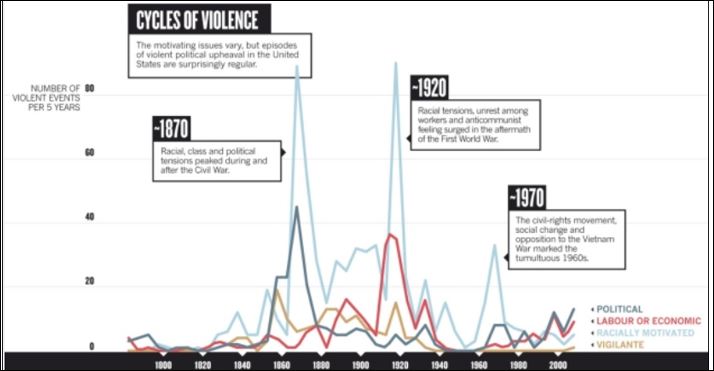 A fear of possible new war impacts predictability of an economy.

Political stability suggests that policies, laws and regulations will be stable.

Political stability requires that political leadership is stable and predictable. Political stability suggests that there are ample experts in economic departments and regulatory structure to get the job done. I recently heard that our State Department is hundreds of people short, thus much international work simply cannot be done. Political stability suggests transparent consensus of the creation and enforcement of laws, regulations, taxes and dozens of policy issues relating to labor, the hiring of people with skills and brains from throughout the world, and the ability to develop planning knowing that political changes will not create financial crisis. Recent reports indicate that the Environmental Protection Agency is firing people and replacing them with businessmen of the polluting industries the EPA is supposed to monitor. Thus, proven toxic chemicals are being removed from "danger lists."  No doubt this will cause the deaths of thousands of children.

This week Time Magazine’s cover showed “wrecking balls” and headlined: “The Destruction of America as We Know It.” When serious businessmen are so concerned that they promote impeachment of a president, or the nations of the world are in fear because a leader casually threatens nuclear war, it does not suggest political stability. Furthermore, the new tax law creates issues for homeowners and business owners alike.

One example: We have known for years that some politicians have wanted to take away or limit the interest deduction on home mortgage loans.

This new tax law that is in the works is a first step in that direction which for many people could take away much of the advantage of home ownership. Other deductions such as being able to deduct for state and local taxes, sales taxes and others are being considered, and this could be particularly harmful to Americans and businesses.  When a corporation, small businessman, farmer or family cannot predict what tax liability they will have, it is difficult to plan for the additional taxes they must pay. Such political instability creates economic instability. It tends to put a damper on new investment, spending, savings and consumption.

U.S. elected officials are trying to rewrite and completely change the tax law, the IRS Tax Code of the USA.  Much of this has been done behind closed doors, and much of it seems illogical. Proposals to eliminate many deductions that people and industry have relied upon for budgeting for decades are being removed or vastly changed. This proposed new law provides windfall tax savings for the wealthiest and most profitable industries by reducing their tax rate to 20 percent while suggesting only modest tax advantages for the vast majority of ordinary people who may pay 35 percent. The proposed tax law is disruptive and unfair. Plus, the new tax law does not allow a logical budget to cover deficits, so there will be perhaps a trillion dollars or more new debt (deficits) for the USA, something the American people do not agree with. 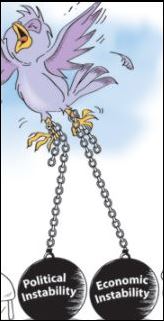 Republicans and Democrats in Washington, D.C. say that they do not want more deficits. Yet they have drafted a new law that would vastly increase deficits. Recent polls indicate that most Americans don't want a tax code that increases national deficits. This tax law relies upon a huge economic boom that is purely hypothetical and not likely to occur in this unstable political and economic environment. When leaders in D.C. introduce the additional weight of deficits and a new tax plan that actually reduces deductions, IT WON'T FLY, FOR THE NATION.

LACK OF STABILITY IMPACTS THE SUCCESS AND POWER OF A NATION:

1. when a nation's leadership is not perceived as reliable or stable.

2. when a nation’s leader lacks credibility as wise or truthful. Or if that leader is impulsive or exaggerates constantly.

3. when 68 percent of  “tweets” or communications from the White House have proven inaccuracies.

4. when a nation cannot be relied upon to keep treaties, international accords, or pledges to other nations.

When these things happen, the world, especially our allies, begin to lose confidence in us as a nation. If foreign investors continue to sell their United States treasury bonds, notes, and U..S dollars (some 40 nations now are trying to cease or reduce holdings of the dollar), then the power,  influence, and financial foundation of the nation is harmed. It tends to cause our interest rates to increase, which is a silent tax upon every American.

When home and foreign investment does not see predictability or stability (political or economic), then one of the things that occurs is that property values, investments and asset values decline. People are fearful, so they cash in and put their money in something they can hold tightly, such as diamonds, gold or other liquid assets. This could have a major impact upon you, your family, your business, your company, your retirement account, your farm, on and on.

This is a set of reasons that it may be a good time to have your assets, your real estate and your company value appraised now. You may need to establish a “basis” of value for planning, for marketing, or for selecting attractive properties. Whichever you are, a buyer or a seller of property and assets, an independent appraisal to determine and establish a value might make sense. It can enhance the ability to make informed decisions of property and asset values during times of change. Appraisers and valuation experts at: www.benboothe.com can help. We cannot bring stability or predictability to changing and uncertain times, but we can give you facts so that you can make good decisions about how to survive, how to cut your losses and even prosper with good valuation information.

We research and consult.

We offer ENVIRONMENTAL REPORTS, PHASE 1, 2, 3 REPORTS and NEPA REPORTS. YOUR PROPERTY MAY HAVE ENVIRONMENTAL SURPRISES. We can inspect and research your property and provide reports with solutions, and if all clear, promptly give you a written clean bill of environmental health.  Time is money, we respond quickly so you can move forward.

IF THE FUTURE IS CONFUSING OR UNCERTAIN, PERHAPS WE CAN HELP SEE FACTS THROUGH THE FOG.

We at Boothe and Associates, the Boothe Companies, BBAR Inc., cannot solve the problems of changing times and instability of political or economic leadership.  But we can provide valuation tools to help you chart a course for future planning. Call us: