The Headline of USA TODAY SAYS IT ALL 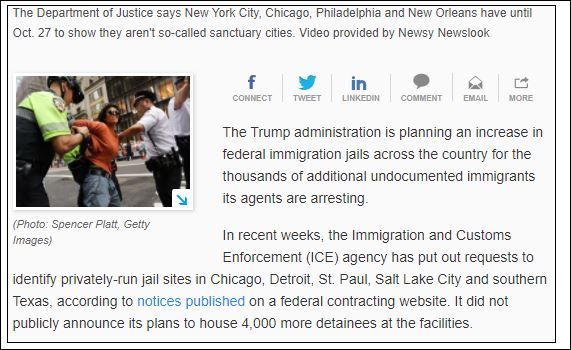 Ben Boothe and Associates is one of the more experienced prison appraisers in the USA. “We have appraised prisons from coast to coast and typically can complete a prison appraisal in 12 to 20 days,” Boothe says.

The company also provides environmental reports, Phase I and NEPA studies to allow prisons to comply with Federal Law.

“Ours is the fastest turn around in the nation.” Said Boothe, Prison Appraiser.

“We see prospects of many new projects and appraisals, both for new prisons, renovations and additions for prisons,”  said Boothe (see www.benboothe.com).

Between Jan 22 and Sept 9, ICE arrested 28,011 undocumented immigrants without a criminal record. This is filling up some prisons that had become largely vacant over the past eight years.

ICE houses 31,000 to 41,000 detainees a day in federal prisons, privately operated facilities and local jails. With a typical reimbursal rate to the owners of the prisons of $57 per day per prisoner, the taxpayer cost of this is estimated at: $2.3 million per day, or $853 million per year. If President Trump has his way, that number will increase significantly. Attorney General Jeff Sessions is pressing to build more new prisons and fill them up with arrests throughout the nation.

THERE IS A PROSPECT OF NEW PRISON CONSTRUCTION DUE TO THE MANY NEW ARRESTS.

BBAR Inc. (Ben Boothe Associates ) has one of the largest data bases of prison sales in the nation.

"If we do both appraisals and environmental studies on the same property, we provide a 30 percent discount for the environmental report fee."