A basic rule of politics in the USA is that a president should not do or say things that offend his own political party leaders.

Trump has yet to learn this in his speeches, tweets and political announcements. We report interesting statements from Republicans, who one by one are managing courage or anger enough to speak out.

History as far back as ancient Rome demonstrates the error of alienating your own supporters. Caligula, emperor of Rome, made the mistake of humiliating senators of Rome when he made them run beside his chariot in view of the "people" to speak to him. He was known to "fire" and even execute his closest advisers. Eventually, his government and the Roman people turned against him. But it took time for Roman leaders to gain the courage to speak up against him. That was the beginning of the end of Caligula's reign as ruler of Rome.

We are seeing something unprecedented in the United States. While polls show a majority of Americans disapprove of Trump's policies and his style of communication (Trump has had an approval rating of 40 percent or below for months), we now see more and more leaders of his own party having courage to speak up against him. This is interesting to us at BootheGlobalPerspectives, as we have seen political leaders come and go for decades. This is not fake news, it is simply recognition of reality. One would expect people of "the other party" to oppose Trump. But now, leaders of his own party are seeing what the American people are saying by their disapproval ratings.

* Recently, Sen. Bob Corker of Tennessee (once a candidate for Secretary of State) said in response to another barrage of Trump tweets cleverly calling the White House: "An Adult Day Care Center."  The phrase hints at various comments that Trump tweets are often infantile.

* Sen. McConnell, majority leader of the Republican party, has said, " I don't like the Trump tweets."

* Senitors Rubio, McCain and a host of others have spoken out against Trump statements.

The list goes on and on (see a partial list below), and we have detailed just a few names, dates and sources in the following insert.

Stay tuned as we watch these trends, which could change the course of American politics.

REPUBLICAN LEADERS GAINING COURAGE TO SPEAK OUT AGAINST TRUMP

After Trump did his middle-of-the-night tweet storm, Republican Sen. Bob Corker tweeted back:

"It's a shame the White House has become an adult day care center. Someone obviously missed their shift this morning."

Corker is Chairman of the Senate Foreign Relations Committee, a powerful voice in Washington D.C. 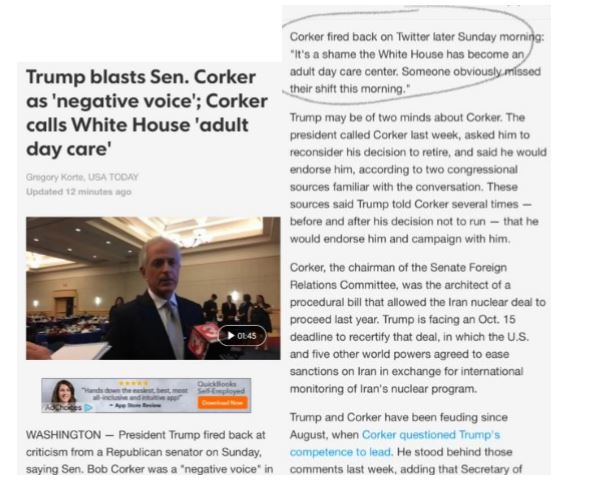 It is happening. More and more members of Trump’s own party are becoming willing to speak out in response to the midnight tweets that flow out of the White House.

See these "COURAGEOUS EIGHT" who recently have spoken out from the Republican side of the political leadership.

WHEN MEMBERS OF HIS OWN PARTY HAVE COURAGE TO CONDEMN THE PRESIDENT, THE AMERICAN PEOPLE SHOULD TAKE NOTE.

The best Trump has done in the polls has been when he made efforts to work with, or at least speak to, Democrats. This we find interesting, but also dangerous for this president and support of his base. Also, we can never forget something that is not scientific, but it is important sometimes to listen to the innocence of a child's voice. In spite of all of the pomp and hype for the president while he was in Puerto Rico, we thought it telling, when a child in innocent simplicity and with timid voice said at a Trump event in Puerto Rico, "I wish the president would stop tweeting and do something to help."

We at BootheGlobalPerspectives will continue to follow this president and political trends and to try to analyze and sort out the political implications.

Also we are interested in the economic and valuation implications through our appraisal company for American businessmen, property owners and bank lenders. Don't kid yourself, politics can impact economics and value.

And economics, jobs and the net worth of Americans is important to most Americans. Consider when the value of millions of homes, farms and business properties declined in 2008-2009. We saw the biggest recession in 40 years.

(It has not gone unnoticed that for the first time in seven years, the USA actually lost jobs in last month's reporting by the U.S. government.) In America, jobs always seem to be more important to voters than ideology.

Thus we plan to watch this with care. Is this just because of weather-related disasters, or is something askew in the economy? We do not have enough data to judge, but the next few months should provide enough information to make a fair judgement on this.

FACT NOT FAKE:  TRUMP'S PHILOSOPHY, WITH A 40 PERCENT OR LESS APPROVAL RATE, DOES NOT SEEM TO REFLECT THE SPIRIT OF A MAJORITY OF AMERICANS.

FACT NOT FAKE: MORE REPUBLICAN LEADERS HAVE BEEN CRITICAL OF PRESIDENT TRUMP'S TWEETS AND SPEECHES

These things would normally bode ill for a president, regardless of party. Stay tuned.