I was reading about Germany. There, if someone waves a Nazi flag, they will be automatically put in jail.

"The law goes further. There is the legal concept of “Volksverhetzung,” the incitement to hatred. Anybody who denigrates an individual or a group based on their ethnicity or religion, or anybody who tries to rouse hatred or promotes violence against such a group or an individual, could face a sentence of up to five years in prison. 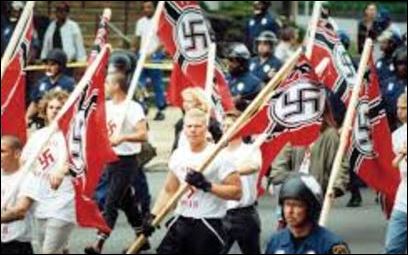 In Germany, the very presence of neo-Nazis openly marching through a city bearing swastika-emblazoned flags, as they did in Charlottesville, is unthinkable. Unlike the United States, Germany places strict limits on speech and expression when it comes to right-wing extremism. It is illegal to produce, distribute or display symbols of the Nazi era — swastikas, the Hitler salute, along with many symbols that neo-Nazis have developed as proxies to get around the initial law. Holocaust denial is also illegal.

There is a powerful passage from the Austrian philosopher Karl Popper’s 1945 book, “The Open Society and Its Enemies,” that in essence says that tolerance toward the intolerant cannot be infinite, or the tolerant risk eradication.

"TOLERANCE TOWARD THE INTOLERANT CANNOT BE INFINITE, OR THE TOLERANT RISK ERADICATION"

Karl Popper, his book: "The Open Society and Its Enemies"