FACTS THAT MAY IMPACT SUCCESS AND WILL IMPACT OUR WORLD: 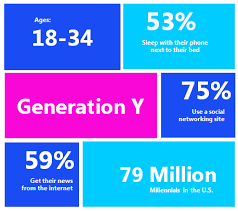 MILLENNIALS (BETWEEN THE AGES OF 18 AND 33 BORN BETWEEN 1982 AND 1997) ARE THE LARGEST LABOR POOL AND REPRESENT THE FUTURE OF AMERICA WITH 75 MILLION PEOPLE. 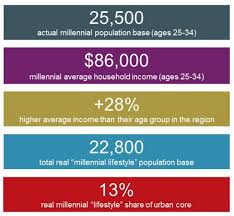 BOOMERS (BORN BETWEEN 1948 AND 1964) NUMBER 74.9 MILLION. THEY ARE THE MOST AFFLUENT, 80 PERCENT OWN THEIR HOMES AND THEY CONTROL A LARGE PERCENTAGE OF CASH SAVINGS.

Think about the social, economic and political implications of age, health and longevity.

WE DO NOT HAVE ENOUGH PEOPLE COMING ALONG TO REPLACE THOSE THAT ARE PASSING ON EVERY YEAR.  WE ARE FACING A LONG-TERM LABOR SHORTAGE.

The people of the USA who are over the age of 65:

1. Own 77 percent of US personal assets.

2. Have 60 percent of the savings account balances in the USA.

3. Own 68 percent of all personal money market accounts.

4. Control 50 percent of common stock shares of the USA.

6. Own or control 80 percent more of "large financial assets such as big homes, buildings, land, companies, airplanes, boats, luxury second or third homes" assets, than the average person of the USA.

7. Have a net worth five times the average American.

BUT, THOSE OF AGES 18-33 ARE SOUGHT AFTER FOR "new consumer spending." It is a market that advertisers see with great potential. (new cars, new houses, retail spending, shopping, consumer goods)

CONSIDER THE BABY BOOMERS:  Some of them were just lucky. They have lived long lives. Some had a work ethic and worked hard for lifetimes to achieve their wealth. Some were lucky to live in good locations of the USA, when property values skyrocketed. Some were raised with, and lived by, good ethics of honesty, hard work and ambition. Often the luck of location,  available education, economic trends and societal support makes a difference.

Consider the difference between a person who lived most of his life in Texas or in California as prices and economics boomed.

* If the Texas economy GDP were considered a nation, Texas would be the ninth wealthiest nation on earth.

* Texas, California and New York have more millionaires than most nations.

The same home in California, in Santa Monica, of 2,000 square feet will market for $3 million, and that same home can be purchased in Arkansas, Oklahoma, Kansas or Iowa for $200,000 or less.

Mortality rates, clean air, clean water, and health standards vary with affluence in the USA.  Education, opportunity, crime: all are impacted by affluence or wealth.

THE FACE OF THE USA WILL BE DIFFERENT IN 50 YEARS.

WILL IT BE A LAND OF GREATER DIVERSITY AND TOLERANCE?

WILL THIS BE A UNITED STATES OF AMERICA?

WILL IT BE PROSPEROUS, HEALTHY AND A SAFE PLACE TO LIVE?

LOOK AT THE NUMBERS AND LEARN.  OUR COUNTRY HAS THE MOST POTENTIAL IT HAS EVER HAD IF:

WE TEACH THIS GENERATION AND FUTURE GENERATIONS HOW TO DREAM DREAMS AND HOW TO ACHIEVE THOSE DREAMS OF RESPECT, TOLERANCE AND WORKING TOGETHER AS AMERICANS.