Apple has more cash than most nations on Earth. From its $200+ BILLION in cash holdings, it is providing a gift to the future of jobs and economy of the United States. We find Apple's decision to be one of the most refreshing and uplifting things we have witnessed in big business in decades.

Apple actually has come up with a positive solution for the future economy of the USA, and is funding it. If you didn't like Apple before, you should love Apple now. CEO Tim Cook announced plans to start a $1 billion fund to promote advanced manufacturing jobs in the U.S.A.  Cook had already released a press announcement when he told Mad Money host Jim Cramer of this extraordinary plan. We all know that many American companies have been less than loyal to the USA. We have repeatedly called for them to manufacture, produce, or invest more in the USA. But how refreshing to hear Tim Cook speak of Apple's perspective that "advanced, high-tech manufacturing" is essential for future growth and development in this bold new world of high technology.

Every American has felt the pain of seeing American workers lose jobs to foreign companies. The carrot has been cheaper labor and lower taxes. Cities of the old "rust belt"  such as Detroit, Cleveland,  St. Louis and Pittsburgh lost huge segments of their economies to foreign competition. But worse, jobs were lost to American companies who have moved manufacturing to other nations. Ben Boothe, Publisher of Global Perspectives, visited Pittsburgh and saw the historic sites where large steel companies, which had once hired thousands, had been dismantled. Later he visited Monterrey, Mexico, and while viewing the steel company there heard his guide say, "This plant was dismantled in Pittsburgh, we brought it here, rebuilt it, and are selling this steel back to the USA."

But Tim Cook and others believe that the USA can win this battle of economics by taking the lead in "advanced manufacturing" that will create efficiency and proprietary knowledge to make the USA again a world leader in production. We see similar leaders in other industries such as the movie industry. While the USA long enjoyed leadership in the big studio system, for pre-production, production and post production, high technology has made a new market, the "small screen" entertainment segment, a new technical and industrial segment. The USA has taken the lead in expanding the movie industry by the use of technology. In many new films, the income for internet online viewership can match the income from old traditional movie theaters. One result is that movies can be originated and distributed from cities such as Albuquerque, or Santa Fe, New Mexico. The economic potential for the future is staggering in that industry. Thus, technology has helped the USA create more film and movie jobs in more cities rather than concentrate them in a few giant hubs such as L.A..

The painful part of this story is the telling of why it is so necessary for the USA. We cannot survive and remain a world economic power by simply having a service economy. We must think about the thousands, millions of American workers who have suffered job losses. Their families suffered, they were unable to afford the very products that they had once made.  This has been an echo repeated for decades. The USA always had the innovation to invent, create new industries, and then we move these companies to other nations, enhancing foreign economies while hurting our own. In the process we create income imbalance, where a few executives and stockholders at the top reap financial bonanzas while the middle class is eroded into a lower middle class, or even down to poverty levels.

It is disheartening to buy an American brand car, for example, only to find that in fine print it is made in Mexico. Or frustrating to buy a historic U.S. company product, such as a Maytag appliance, only to learn that the parts are now made in China. Furniture with South Carolina brands often now are made in India, and even my dress shirts with a big American logo are made in Cambodia and China. U.S. companies such as Walmart announced years ago that they were an American company and bought American products, then switched to lower cost goods made in China and other nations. In the name of greed, they demonstrated huge disloyalty to the USA and our workers.  I agree with Apple's approach, it is a long-term approach to create the foundations for future "high-tech, advanced manufacturing."  How about the rest of American industry and business? We at Boothe Global Perspectives call on you to create new 10-year or 30-year business plans to expand American manufacturing and business!

Twenty years ago we wrote an article and called for America to take new steps to rebuild our manufacturing base.  Now, we see Apple Computer actually doing something.

"We can be the ripple in the pond," Cook said, adding that Apple will announce its first investment later in May. "Those manufacturing jobs create more jobs around them because you have a service industry that builds up around them." 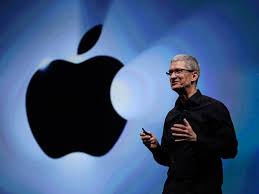 Apple, the world's largest computer company, as a tech giant already is responsible for creating over a million jobs in the U.S., according to a Wednesday update on its job creation page. The number of people employed by Apple, including positions at the company's retail stores, grew to 80,000 in 2016 from 76,000 the previous year. The company added 90,000 supplier and manufacturer jobs last year, increasing the total number to 450,000. Apple also says 1,530,000 American jobs can be attributed to the App Store universe.

We at the Boothe Companies offer a loud THANK YOU to Apple and encourage other US companies to follow suit. In fact, I think I will go out and buy another Apple computer, just my small "drop in the pond" to say, THANKS!