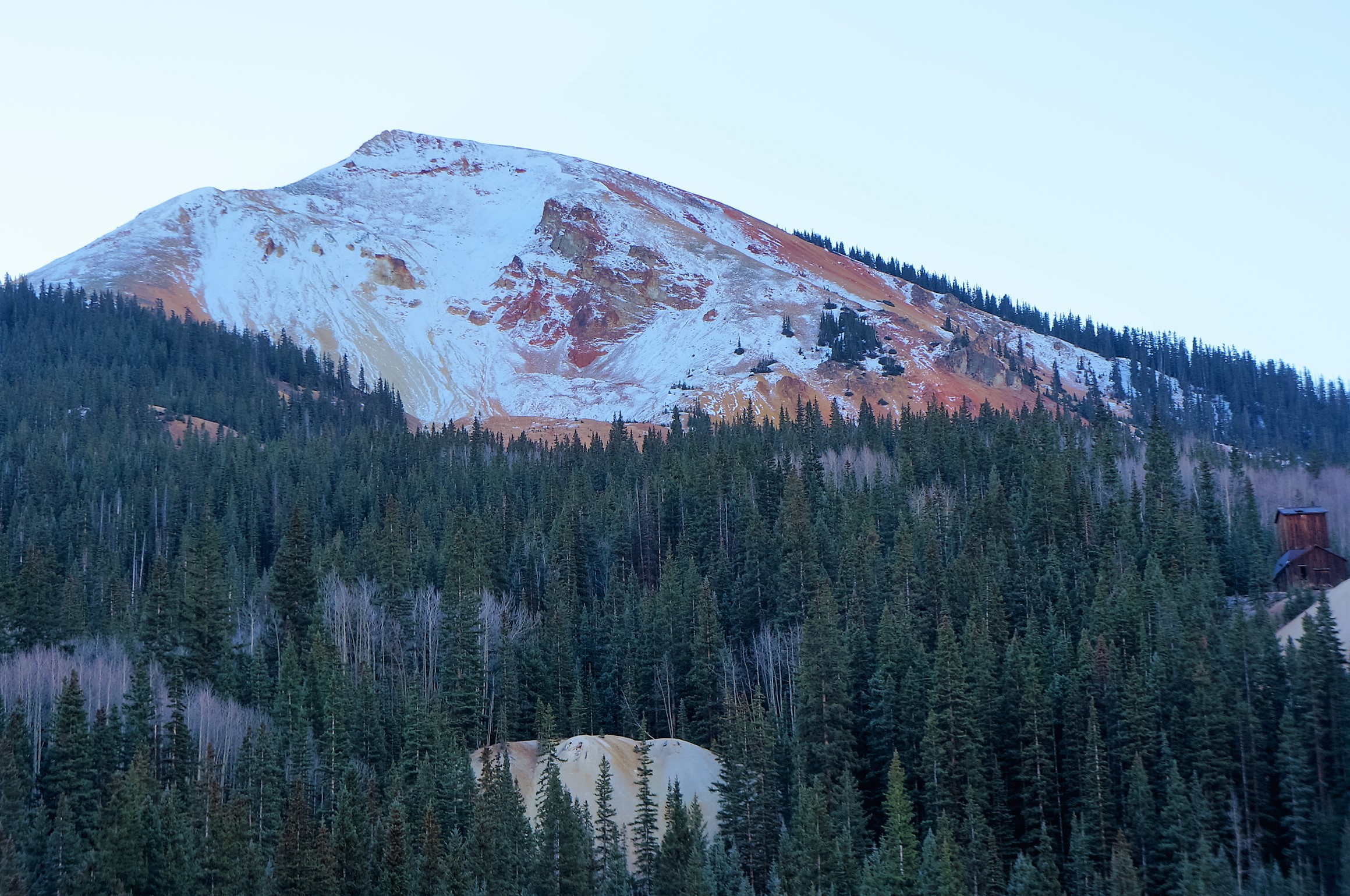 We give credit to Chelsea Harvey and the Washington Post for this article which we found on line. Climate change could destroy far more Arctic permafrost than we thought — which would worsen climate change. Global Perspective notes as GPN.

(GPN: Just drive to Colorado, or New Mexico and look at some of the highest mountains.  We are driving up to this mountain in a few days.m This photo taken in Mid Winter shows a mountain that normally would be covered with a snow bank and "glacier like" area.  Now it is not).

Climate change could cause another 4 million square kilometers, or about 1.5 million square miles, of permafrost to disappear with every additional degree Celsius, or 1.8 degrees Fahrenheit, of warming, a new study suggests.

The estimate, which was published Monday in the journal Nature Climate Change, is about 20 percent higher than previous studies, the authors said.

The study suggests that if the Earth’s temperatures warm 2 degrees Celsius, or 3.6 degrees Fahrenheit, higher than their preindustrial levels — the maximum amount of warming nations around the world have aimed to allow under the Paris climate agreement — more than 2.5 million square miles of permafrost could disappear.

Under a more severe outcome of 6 degrees Celsius, or 10.8 degrees Fahrenheit, of warming above preindustrial levels, which could occur sometime after the turn of the century if greenhouse gas emissions continue to go on unabated, nearly all the earth’s permafrost would likely disappear.

The loss of more permafrost would release more methane, a highly potent greenhouse gas, than scientists have previously predicted. That could worsen a dangerous climate feedback loop in the Arctic, whereby increased emissions cause greater warming and greater warming causes faster thawing of permafrost, which then releases more emissions.

Other consequences of thawing permafrost, including a softening and sinking of the ground, which can damage roads and buildings, could also affect greater areas of land.

As a result, the researchers note in the paper, sticking to the most stringent possible international climate goals could make more of a difference than ever.

Participants in the Paris agreement have settled on a broad goal of keeping global temperatures within 1.5 to 2 degrees Celsius of their preindustrial levels — that’s 2.7 to 3.6 degrees Fahrenheit — with 1.5 degrees being the clearly more ambitious goal. The new study suggests that the total area of permafrost lost to climate change would be about 30 percent smaller if the planet stabilizes at 1.5 degrees instead of 2 degrees.

Under 6 degrees Celsius of warming above preindustrial levels, the study suggests that a maximum of about 600,000 square miles of permafrost would be left on the planet.

The resulting methane emissions would be a major concern not just for the Arctic, but the global climate as a whole.

It’s the first study to place climate-related permafrost loss in the context of global temperature goals, according to Chadburn. The researchers arrived at their estimates using a different approach than is typical for modern permafrost studies.

Unlike previous studies based on computer models, the new study relied mainly on direct observations of permafrost cover and global temperatures, collected in the latter half of the 20th century. The researchers used these observations to link those changes in the Arctic permafrost to changes in global mean temperatures.

Some scientists who did not work on the paper said the use of recorded observations — instead of models — could provide a more accurate picture of permafrost loss under climate change.

“Current models of the impacts of climate change on the carbon loss from the Arctic are highly uncertain, and very few models include the response of permafrost to climate warming,” permafrost expert Donatella Zona, an assistant professor at San Diego State University and senior research fellow at the University of Sheffield, who was not involved with the new research, said in an emailed comment to The Washington Post. “Improving our current estimates is critical to give a more accurate figure of the cost of climate change in the Arctic on our society, now spanning a large range.”

But Vladimir Romanovsky, a scientist with the Permafrost Laboratory at the University of Alaska Fairbanks, who was not involved with the research, said the models were still superior.

“This very simple approach, which is based on air temperature, it was very common about 20 years ago,” he said in an interview with The Washington Post. “And since then, lots of progress was made and much better estimates are available.”

He said physical conditions that affected permafrost behavior in the 20th century — snow cover and hydrology, for instance — may not behave in the same way under future climate change. The authors of the new paper attempted to address this uncertainty by using climate models to investigate whether the relationship between air temperature and permafrost will substantially change in the future as a result of changes in snow depth or similar issues, and they claim that the relationship should remain similar.

Romanovsky also notes that the new paper’s method does not account for typical delays between changes in air temperature and the onset of thawing. Permafrost doesn’t just disappear immediately when warming takes place, as the simple method used in the study might imply.

Chadburn suggested that these delays often span only a few decades. But Romanovsky says there’s a high degree of uncertainty on that front, and delays in permafrost’s reaction to temperature changes can occur over hundreds of years. As a result, he says, this method should not be used to make predictions about the effects of rapid climate change.

Anna Liljedahl, another permafrost expert at the University of Alaska Fairbanks, also pointed out the timing issue in an emailed comment to The Washington Post, and she added that she believes the new study’s approach “underestimates the response lag-time by deep permafrost.”

But she noted that permafrost doesn’t have to completely disappear, in the way the new study suggests it will, for negative consequences to occur. Permafrost released carbon emissions as it’s in the process of thawing, not all at once after it disappears, and gradual changes in the landscape, caused by partially thawed permafrost, can still cause damage to infrastructure

“So to some extent their projections are probably both underestimating and overestimating the impacts of rising air temperatures on permafrost health,” Liljedahl said.