Sunflowers have a circadian clock. How they follow the sun.

Credit and thanks go out to Christina Beck of The Christian Science Monitor for posting this article online.  We at

BootheGlobalPerspectives have long studied Sunflowers, grown them on our family farm in West Texas, and even grew a greenhouse lab plant that was huge, nearly 16 feet tall. They are amazing plants.

Thus with this article we share just a little "Sunlight" with you.  BBB

How do sunflowers follow the sun's path? A circadian clock revealed

Scientists say sunflowers are much more complex than they appear. A new study shows how the bright flower manages its own circadian clock.
By Christina Beck, Staff Christian Science Monitor

True to their name, young sunflowers greet the sun each morning with their heads turned east to catch its rays. Throughout the day, they follow its movement until the sun sets in the west at night, and the cycle begins again. 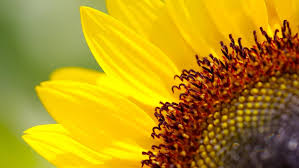 But just how sunflowers can do that has long been a mystery – until now. According to a new study published in the journal Science, the heliotropic sunflower uses both circadian rhythms and heliotropism (bending and turning toward the light) to enhance its performance in the natural world.

"Just like people, plants rely on the daily rhythms of day and night to function," Anne Sylvester, the director of the National Science Foundation's Plant Genome Research Program, which funded the study, said in a press release. "Sunflowers, like solar panel arrays, follow the sun from east to west. These researchers tap into information in the sunflower genome to understand how and why sunflowers track the sun."

Look at a sunflower very closely and note the Fibonacci sequence in it's architecture.

Sunflower movement is more complex than simply following the sun across the sky by day. Researchers found that sunflowers that watch the sun’s progress return to their morning position facing east. On short summer nights, it takes sunflowers less time to move back to their eastward-facing morning position than it does on longer autumn nights.

“At nighttime, you could see the whole plant rearranging itself, and it was such an amazing thing,” Dr. Harmer said. “I tell my students all the time that plants are capable of incredible things – we just don’t notice because their time scale is different than ours.”

Researchers were curious – was sunflower movement simply guided by the sun? Or was there a deeper explanation for their movement?

To discern whether or not the sun’s rays were the key to understanding sunflower movement, scientists raised sunflowers indoors under lamps. Despite the lack of true sunlight, the young flowers followed an imaginary sun’s path throughout the day. When researchers exposed the flowers to a 30-hour light cycle, they still maintained the sunrise, sunset pattern.

These reactions to unnatural light told the researchers that something more was likely in play than simply an instinct to follow the sun. Instead, they suspected that a circadian clock helped guide their movements.

But what scientific reason could there be for following the sun?

Hagop Atamian, a post-doctorate researcher of Harmer's, helped to solve this mystery by turning a field of potted sunflower plants to the west before the sun rose each morning. Compared to a similar field of unmanipulated plants, the westward facing sunflowers were 10 percent smaller: a significant difference, according to researchers.

Not only does facing east help plants grow larger, but researchers also discovered that early warming plants that faced east got five times the number of pollinators than westward-facing plants, even those which were warmed with a heat lamp.

There’s a lot more for scientists to learn about sunflowers.

Still, according to Harmer, this study is especially significant because "it's the first example of a plant's clock modulating growth in a natural environment, and having real repercussions for the plant," according to Science Daily.