5 WAYS TO CREATE NEW INDUSTRY AND JOBS IN AMERICA 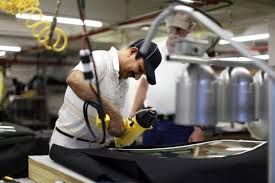 Millions of manufacturing jobs have left the USA in the last decade, hollowing out towns and cities throughout the USA. Don Trump says he will bring the jobs back by "putting a 30 percent tariff on goods made overseas when they enter the USA."  Tariffs are not the answer, because they tend to cause international tariff wars that tend to slow trade and impair economic growth in multiple ways.

But we at GLOBAL PERSPECTIVES have written repeatedly over the past 20 years on how to bring jobs, companies and manufacturing back to the USA.  Here are a few ideas and USA "job creation steps," all of which have proven to be successful around the world.

GIVE A COPY OF THIS TO YOUR FAVORITE POLITICIANS AND LEADERS!

1. Tax incentives. Malaysia rebuilt its economy by giving tax rebates based upon the number of new jobs companies achieved.  The program there gave financial incentives and resulted in rapid expansion of industry, manufacturing and general business hiring.

2. Reinvest locally.  A system requiring large franchise companies, particularly retailers or hospitality companies headquartered in far-away states which open up in local towns to put 1-7 percent of sales or earnings made into a locally controlled economic development fund in each town to be used to lend or make grants to locally owned businesses. The idea is: "You take from our town, you invest back into our town."  This would apply to retailers ranging from Walmart, to banks such as CitiBank, and to manufacturing companies such as Toyota. Remember when our small towns and midsize cities were economic centers of prosperity? It was because the business owners in those towns kept their money at home and reinvested in their towns. Unfortunately, many businesses have been taken over by "out-of-town franchises or conglomerates," and that money is now siphoned out of each town, slowly strangling the economic power of towns.

3.  National recognition and awards. We have noticed that some nations have used national recognition, awards, even vacations to achieve support from the public for ventures. The program is to give people incentives to be "loyal supporters of the USA" in tangible ways. One of the most interesting and successful examples is found in Mongolia.  When the Mongolians wanted to increase the population, so as to have a larger labor pool, they successfully used recognition and incentives.  They gave women a badge and star with public praise if they had two children, a gold star if they had more children, and if they had as many as 10 children they were given paid vacations.  One day the government decided the country had more children than it needed, so it stopped the incentives, and family size immediately started a downtrend.  The point is simple. The power of recognition, rewards and awards has rarely been used effectively to praise Americans who bring in new industrial growth.  This requires leadership and creativity. What if our government encouraged and sponsored banquets and award ceremonies to honor those who bring new jobs and business to town?  This would be like a Chamber of Commerce on steroids, ramped up, with our senators, congressmen, and even presidents praising Americans for creating new jobs and economic growth.

4. BIGGER, BETTER LOAN PROGRAMS. The Small Business Administration is ideally suited to structure new loan programs with special terms, low interest rates and available financing to companies that wish to build or expand manufacturing and create jobs in the USA. The more jobs that borrowers of these special loans bring to a community or to our nation, the better the loan terms.  It is a simple idea that works well, and everyone profits -- from the bankers, the businessmen, communities, and of course workers needing jobs! At some levels, their could even be "interest rebates" for companies who achieve confirmed success in job creation.

5. Loyalty to the USA. We live in a global economy, but many giant corporations have decided that they no longer are American companies, they are “global companies,” thus they seem to have lost loyalty to their home nation, the USA.  They pit regulations, tax laws and even enforcement from nation to nation. Negative penalties for companies born in the USA that move to other nations may be the “stick” part of the “carrot and stick” concept here.

This will take courageous political leaders willing to pass bold legislation.  Companies that take jobs from the USA to other nations must pay penalties that equal or exceed any advantages of lower labor costs  or tax avoidance by removing jobs from the nation that made their success possible. Furthermore, they should equally be praised and rewarded when they keep jobs at home or add new jobs at home.  Burger King was well exposed for changing its corporate headquarters to Canada from  its home nation, the USA, to avoid paying taxes in the USA.  In its case, as an example, the Federal Government should have the right to increase its operating costs in the remaining USA locations as a “shot across the bow” to any companies that wish to follow suit.  Perhaps this could be called a "separation tax or departure tax." Perhaps new laws can be passed to assure that companies that are essentially USA companies always keep their essential definition as a U.S. company, even if they have operations overseas. If this is combined with the above “tax incentives” mentioned in No. 1, then these companies will see financial advantages to being loyal to the USA.  We notice that Walmart has started reinvesting in American manufacturing after spending billions on Chinese-made, low-price retail goods. The company finally is making strong efforts to repair some of the damage done to America's manufacturers.

We at Boothe Global Perspectives and our readers have many other ideas to rebuild manufacturing, industry and jobs in the USA. These are just a few appetizers. One of these days all of us who are interested should put together a national symposium on the subject, and I will present a larger array of ideas with your help and the help of many experts around the world, of how we can make MADE IN THE USA a sterling sign of character and prosperity again. Plus, we can begin to rebuild heartland America's productive economies.