Dallas Choice, Violence, Anarchy put aside for Peace and Reconciliation

When a killer planned the ambush near Deally Plaza in Dallas, he used skills as a military veteran to created a deadly field of fire. His method was shoot and move, creating an impression of multiple shooters. Authorities believe that this was a single man. The goal was to target uniformed policemen. He succeeded in Shooting 12 people, killing 5. All victims were in uniform most were present to keep the peace.

Such premeditated violence is reminiscent of the violence by a group in India 100 years earlier. They objected that 'because they were of a lower caste that they would rob, wound and kill aiming at those who appeared to be affluent'. But after years of murders, kidnapping and rape the leaders of India determined that they were just criminals. Their group was called Thugs. India said "These people kill innocent people, they must be eliminated if we are to have a safe country." That is where the modern word "Thugs" originated. Not a racial or religious or political word, it simply means evil criminals who prey upon innocent people by killing and violence. No doubt that the thug who shot 12 and killed 5 received his ultimate judgement when he was killed by explosion in Dallas.

But deeper implications are to be considered.
How do we, the rest of America respond to this horrible act of murder? What did the innocent people there, who were murdered do to deserve this?

The City of Dallas gave the world an example today, in a gathering where thousands attended. 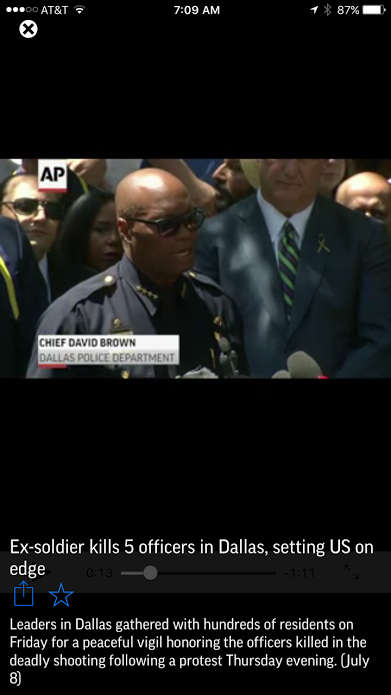 Religious leaders from dozens of churches were present, Christian, Hebrew, Hindu, Islamic, Buddhist, religions of black and white, male and female, were there and they all spoke out against violence and for respect and reconciliation. ALL LIVES MATTER was the line of the meeting. The Mayor of Dallas and the police called for positive steps to pull together as Americans. Not Americans with prefix or suffix, not "Black Americans" or "White Americans" or "oriental Americans" but to act as Americans and build a better nation.

We Americans hire police to help maintain order and to keep the peace. It is a tough high stress job and history tells us that the "warrior" class of any culture is a different type of person. It has been said that many police forces are "Redneck Fraternities".  Well, what can you expect of people you hire to carry a badge and a gun, to deal with the lowest criminal elements of society?  Of course they are tougher minded than the average citizen. The participants at the Dallas demonstration were peaceful and the police were there to protect the demonstrators and their right of free speech.

Remember we the people hire and need police to stabilize and protect our communities from the "Thugs" of this world. The word "Thug" is not a racial, religious, ethnic phrase, it means "violent criminal". It has become too convenient to criticize our "warriors in blue".  The police that 'we the people' hire to protect us, by doing the work that main stream Americans prefer not to do. A well trained police force is given authority and we are to give them respect.

When a man in uniform says "stop or I will shoot" or "drop that gun" or "get out of the car" it carries the weight of law.

Criminals know this but of late it has become popular from some to play the victim card and encourage people to ignore the authority of the very people that society hires to maintain order.

Has the tail of victimology started wagging the dog in America? Certainly the killer in Dallas felt justified when he said "I want to kill policemen".

When I was a youth my father, told me: "Son whether you like it or not, when a man in a police uniform, carrying a gun says 'Stop or I will shoot', you stop, you respect his authority and his power."  Somehow many of the current generation in America, have never been taught to respect a badge and a gun. Some  groups seem to  encourage disobedience of law enforcement officers.   Recently I watched a video of a man out of control and violent. A policeman ran up and said :"Stop, get down" and the man snarled: "I will make you shoot me."  The man charged the policeman and yes, he got his wish.  What is this insanity? Individuals are sometimes committing suicide by forcing the issue.

Mothers, fathers, teach your children to respect and obey law enforcement officers and teach them well.

No doubt the police have an excruciatingly difficult  job these days especially when politicians and leaders of radical groups call for actions that lead to division, conflict and violence. Every ticket a policeman issues carries the risk of an unseen gun being raised to shoot him.  When politicians encourage their crowds to "punch people in the the nose" no doubt the emotional, under educated and unstable may actually become violent. In addition to foolish politicians there are radical elements that wish to encourage division and conflict to destabilize America.

Then there are also well meaning groups that sponsor demonstrations for one color or ethic or religious group or another that create environments and "emotional victimology" that invite violence. There are politicians and men of huge egos who stand up with divisive rhetoric to further inflame emotions.

There are those who are professional victims who only focus on "what the world has done to me" instead of building a life of positive achievements. The professional "victims" complain and destroy, not build and create positive progress.

An argument is repeated that many more minorities are arrested ignoring the fact that some minority groups commit over 70 percent of violent crimes. We noticed an article that showed for example that Albuquerque, NM has the highest rate of gun violence of any city. Further examination shows that 73% of shootings are by Hispanic males under 39 years old and most of the victims are other Hispanics. This is a cultural tragedy, and a tragedy of too many guns, to easily purchased by youth who are too unstable and too immature to know how to handle guns responsibly.  We, the citizens of America seeking a safe and orderly society hire the police to deal with criminals so that we don't have to carry guns and deal with them.

Dallas provided an example of thuggery unleashed with total disrespect for society and for our police. The next day, yesterday thousands of people from Dallas gathered offering, "hugs", "prayers", "love", "respect" and "tolerance".

The Mayor of Dallas said "We must stand in solidarity with police, it is the difference between civilization and anarchy. We must pull together as a community". 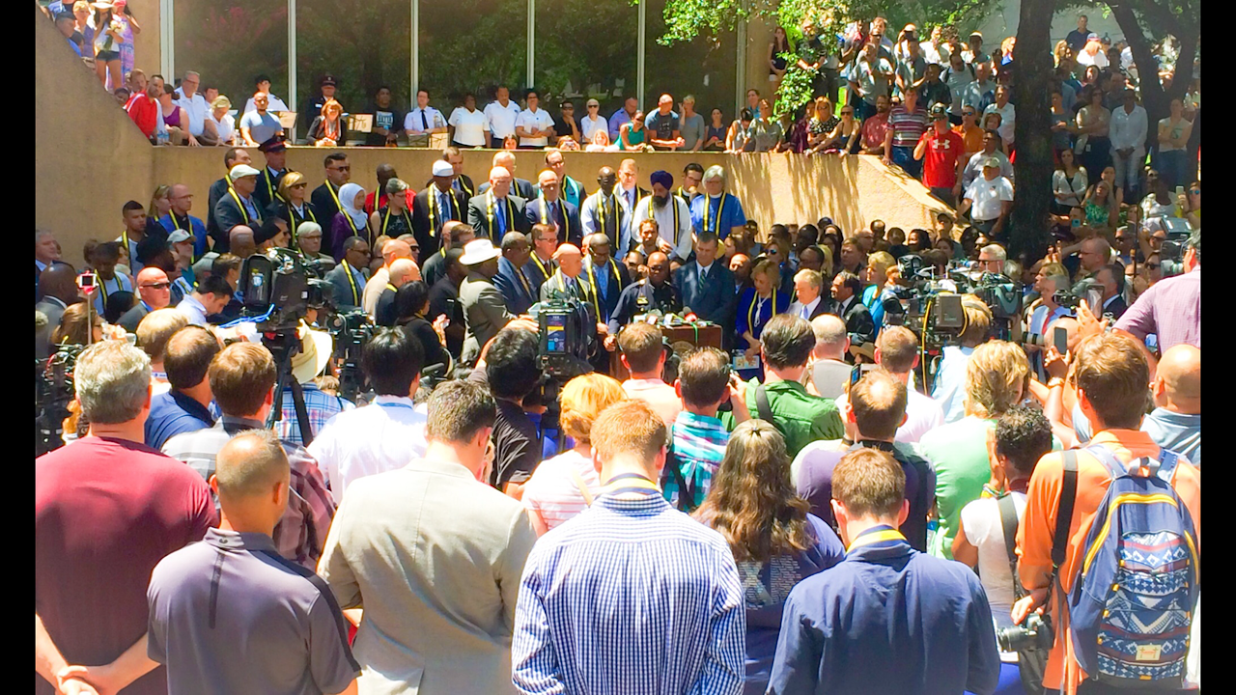 All left that meeting inspired to build a better community and a better world. A world not dominated thugs,  nay sayers and "angry victims". This is a good example of an appropriate and positive pro-active approach by city leaders.  Note the clergy of the prominent religions in Dallas, standing tall, encouraging the Mayor's call for "Unity, Peace and Community Standing Together" in this impressive gathering the day after the shooting in Dallas. One young man at this gathering help up a sign saying: "Free Hugs".   We would rephrase it: "Hugs not Thugs".

What do we recommend?
1. Think of how you can create 2 positives for every negative you see in your community. Whether it be a city, club or church. Never make a criticism without offering a positive solution.
2. Do not endorse or encourage violence but do have people authorized to maintain order and an environment of peaceful progress.
3. Get rid of the "Thugs" in your community or institutions, every group has one or more troublemakers..the guy or gal who is always unhappy with a cloud over his head. Teach your youth that "Thugism" is for losers.
4. Bring in the light. There was an old Carter family song in the 1950's that said there is a choice of two ways of living. "A dark and a sunny side of life". The chorus said "Keep on the sunny side....it will lighten up your day it will brighten up your way if you keep on the sunny side of life."  It sounds simplistic but it is true.
5. Stop whining. Stop encouraging disrespect of the civilized society that Americans have established over the last 200 years with thought and care. Stop being victims and start encouraging unity and American values. Those were the admonishments of the clergy at that meeting in Dallas. Indeed All Lives Matter. We do not wish to see groups empower disruption of society or encourage thuggish victimology.

Most important of all, leaders, clergy, city, county and national leaders must be voices of wisdom must now speak out for peace, calm, unity. Leaders must reteach kindness, mutual respect and patriotism.

Leaders in some communities have created more division and violence by "ramping up" the logic of disrespect for authority and civilization.  It is one thing to be sympathetic to those who wish to consider themselves as "downtrodden", but it is another for people to manipulate victimology and to encourage the use of "the rule of the weaker" as a tool to ramp up emotions and further violence.  In religion we often see the weaker brother concept used to manipulate and control churches, but it is now being used by leaders of groups in America to justify disregard for authority.  Often, politicians and opportunists use these emotional issues and demonstrations for political goals and irresponsible "ramping up" of emotions, can create dangerous situations.

We at BootheGlobalPerspectives call on leaders and voices to use wisdom and lead our nation in the direction of unity, not violence in the streets. Call your community leaders, your civic leaders, your religious clergy, and make it a public campaign to rebuild momentum for peaceful unity of Americans.

Advice for unhappy campers stuck on the dark side of life:

You know who you are and what is inside of you, and you must deal with your demons first.  Our advise is for all fringe groups to "cool it" and start acting like Americans without prefix or suffix. Not "Black American" or "Middle Eastern Americans" or "Mexican Americans" or "White Americans" , "Democrat Americans", "Trump Americans" but AMERICANS pulling together for a cohesive nation. How about starting a new love affair with your nation, the greatest nation on earth, the United States Of America. But all of this starts with the individual, every person must deal with your own demons.  Get back to "more light".

With all of the groups around the world that would seek to destroy the United States, we as a people must re learn how to pull together and learn not to fight among ourselves. There are genuine dark forces around the word that seek to destroy our nation and way of life. It is time that thoughtful Americans of wisdom speak out and use your wisdom to bring leadership and wiser to our world. We must revisit the wisdom of how to strengthen our institutions, not destroy the concepts of orderly civilization. We as a people have seen too many armed and dangerous voices arise bring destabilization instead of positive unification of our beloved land. Thugs, or criminals must be identified and rooted out, but we the people must again become one people, as we have all pledged "One nation, under God, with liberty and justice for all."