Our compliments at BootheGlobalPerspectives and credit to Bloomberg and Daniel Kruger for this article.  We think this is important, especially for financial planners and investors. China, will of course draw down it's investments in American bonds and treasury notes, as it's power increases.  This could impact interest rates in the long run. so far, as our economy recovers, we may gradually get to a point where we do not need to borrow money from China. But the USA has huge debts to China at this time.  BBB

For all the dire warnings over China’s retreat from U.S. government debt, there’s one simple fact that is being overlooked: American demand is as robust as ever.

Not only are domestic mutual funds buying record amounts of Treasuries at auctions this year, U.S. investors are also increasing their share of the $12.9 trillion market for the first time since 2012, data compiled by Bloomberg show. 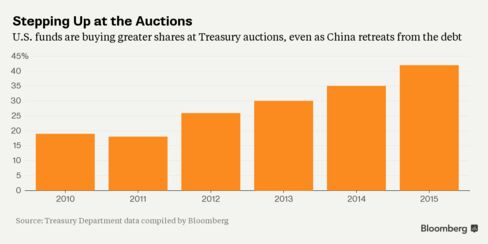 The buying has been crucial in keeping a lid on America’s financing costs as China -- the largest foreign creditor with about $1.4 trillion of U.S. government debt -- pares its stake for the first time since at least 2001. Yields on benchmark Treasuries have surprised almost everyone by falling this year, dipping below 2 percent last week.

It’s not the scenario that doomsayers predicted would leave the U.S. vulnerableto China’s whims. But the fact that Americans are pouring into Treasuries may point to a deeper concern: the world’s largest economy, plagued by lackluster wage growth and almost no inflation, just isn’t strong enough for the Federal Reserve to raise interest rates.

“As you develop a more pessimistic view on global growth, inflation, and rates, asset managers are going to buy Treasuries in that environment,” said Brandon Swensen, the co-head of U.S. fixed-income at RBC Global Asset Management, which oversees $35 billion.

Overseas creditors have played a key role in financing America’s debt as the nation borrowed heavily to pull the economy out of recession. Since 2008, foreigners have more than doubled their Treasury investments and now own about $6.1 trillion.

China has led the way, funneling hundreds of billions into Treasuries as the Asian nation boomed and it bought dollars to limit the gains in its currency.

This year alone, China’s holdings have fallen about $200 billion as it raises money in support of its flagging economy and stock market. If the pattern holds, it would be the first time that China has pulled back from Treasuries on an annual basis. The tally includes Belgium, which analysts say is home toChinese custodial accounts. 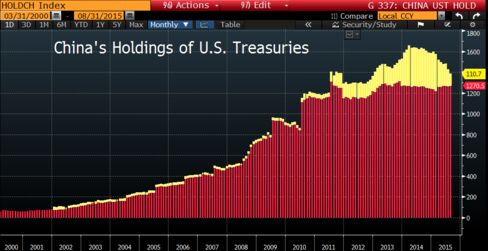 The People’s Bank of China directed questions on its Treasury holdings to the State Administration of Foreign Exchange, which didn’t reply to a fax seeking comment.

The Chinese pullback has led some to raise troubling questions about the U.S.’s ability to borrow and refinance its obligations at ultra-low rates year after year. It’s also reignited long-held concerns, aired over the years by both Republican and Democratic politicians, that China’s ownership of U.S. debt is a threat to America’s independence.

Homegrown demand for Treasuries suggests there’s no reason to panic.

American funds have purchased 42 percent of the $1.6 trillion of notes and bonds sold at auctions this year, the highest since the Treasury department began breaking out the data five years ago. As recently as 2011, they bought as little as 18 percent.

As a group, U.S. investors of all types have also stepped up their holdings of Treasuries since they fell to a low in mid-2014. In 2015, that share has climbed 2.1 percentage points to 33.1 percent of the U.S. government debt market.

That might not sound like much, but the annual increase -- which has pushed up Americans’ holdings to a record $4.3 trillion -- would be the first since 2012.

“The worries about China selling are misplaced,” said David Ader, the head of U.S. government-bond strategy at CRT Capital Group LLC. “This was one of the great fears of the bond market, and it’s happening and we took it in stride.”

While the appetite among Americans for the haven of U.S. debt has kept the government’s financing costs low, what’s worrisome is what it suggests about the health of the economy, according to George Goncalves, the head of interest-rate strategy at Nomura Holdings Inc., one of 22 dealers that are obliged to bid at Treasury auctions. 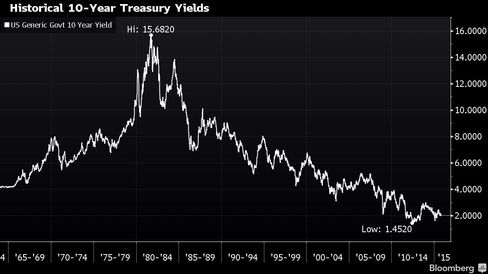 Sure, the U.S. is creating jobs, but a raft of disappointing indicators, from retail sales to manufacturing, suggests consumers are scaling back just as overseas demand weakens.

And wages are stagnating for many Americans. Since the recession ended, average hourly earnings have increased less than in any expansion since the 1960s. Without higher wages to spur spending, inflation has remained stubbornly low.

The auction data shows that U.S. funds targeted 30-year bonds -- those most vulnerable to rising growth and inflation -- the most among interest-bearing Treasuries. That comes as traders are pricing in the likelihood the inflation rate will remain below the Fed’s 2 percent goal over the coming decade.

Yields on the 10-year note, the benchmark for trillions of dollars of debt securities worldwide, were about 2.04 percent on Monday. That’s about a percentage point below where they were at the end of 2013.

Economists in a Bloomberg survey now see a 15 percent chance the U.S. will slide into a recession in the next 12 months, the highest estimate since 2013. 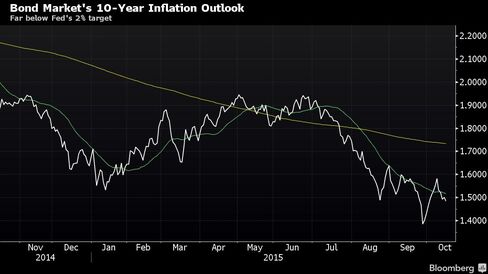 Investors in the U.S. “are making a decision based on their outlook and it’s a reflection of the economy as well as their risk aversion,” Nomura’s Goncalves said.

It also suggests the Fed policy makers may want to rethink their assumptions about the need to raise interest rates any time soon. While Fed Chair Janet Yellen has said she still sees the economy growing enough for the central bank to raise rates by year-end, traders are skeptical. They see only a 32 percent chance of a rate increase by December, while the odds of a March rise are at little more than a coin flip.

Some Fed officials are coming around to that view. Governors Lael Brainard and Daniel Tarullo both indicated this month the Fed should wait until clearer signs of inflation emerge.

“There’s no pressing reason for the Fed to hike rates and there are clear risks against a global backdrop that’s so fragile,” said Robert Tipp, the chief investment strategist at Prudential Financial’s fixed-income unit, which oversees $533 billion.