How Dirty Is Your Air?

Credit to Angel Hsu and Alisa Zomer for this article, and Grist for first putting it out there.  We at BootheGlobalPerspectives notice that the concentration of power plants along the Mississippi and other great waterways, shows a huge increase in pollution "downwind" (wind west to east).   Texas for example is fairly clean, except just southwest of Fort Worth and Dallas are huge power plants and concrete processing plants, and the D/FW area has worse air than Houston in this study.  A large pollution plume drifts from Old Mexico, into Texas SE of the Big Bend area.  In New Mexico the entire state seems clean, but closer study shows air quality declines near coal operations near Farmington, and oil operations near Jal. 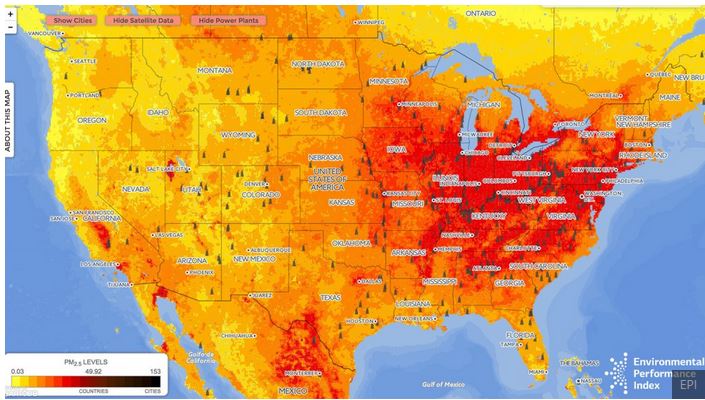 How dirty is your air? This map shows you

By Angel Hsu and Alisa Zomer

President Obama’s Clean Power Plan, released this week, is arguably the most ambitious effort ever untaken by the U.S. to fight climate change. But it will also create enormous public health benefits by cleaning up the air people breathe, saving thousands of lives annually in the U.S.  Air pollution in some U.S. cities has in fact gotten worse over the past decade.

Our map, below, shows air pollution problem spots not just in the U.S. but around the world. It color-codes high-resolution air pollution data (specifically, fine particulate matter or PM2.5) from ground level (data reported by the World Health Organization) and from the atmosphere (satellite-derived estimates calculated by researchers at Dalhousie University). Regions shaded in black are exposed to very unhealthy or hazardous levels of particulate matter, and dark red to red represents unhealthy amounts, using classifications from the EPA’s Air Quality Index thresholds. The areas with safe air quality are colored yellow to orange. We also include locations of the world’s dirtiest power plants, according to Carbon Monitoring for Action (CARMA).

(You can also view a larger version of the map.)

The map illustrates some clear trends:

The Clean Power Plan has brought out a powerful set of opponents. If it’s to survive, it will need public support. Knowing where air is most polluted and why is a first step toward tackling poor local air quality and global climate change. Our map makes air pollution’s worst hotspots public knowledge, showing in high-res clarity the nation’s dirtiest air and the power plants that are the main culprits.

Angel Hsu, PhD, is an assistant professor of environmental studies at Yale-NUS College and the Yale School of Forestry and Environmental Studies. Alisa Zomer is a research fellow and manager of the Yale Environmental Performance Index. The map was built by David Wong, a computer science major at Yale College, from a map our group originally featured in The Atlantic in June 2014.

The dirties air in the world is in China, due to massive coal power plants and primitive industrial environmental remediation. A large percentage of the soil in China is polluted, and the impacts of this on farm products is still difficult to understand, it is so widespread. No doubt health impacts and cancer rates, if honestly disclosed would be of great interest.  India comes in second, with a high population density.  Fortunately there are progressive thinkers in India (and some in China) who see the merits of renewable energy and cleaner methods of producing power. 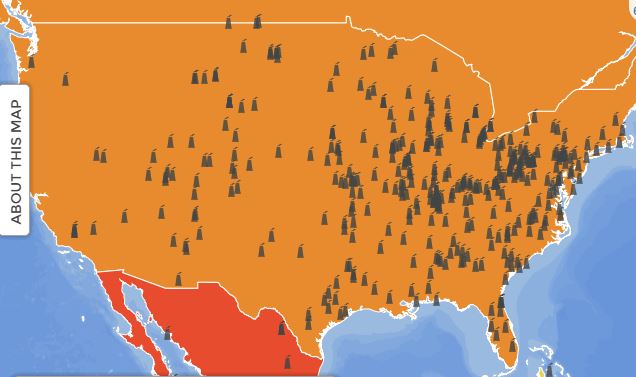 Below are the dirtiest power plants in the USA. Sadly members of the US Congress, such as Joe Barton, have given a lifetime fighting clean air regulations, and taking huge contributions from utility companies and industrial polluters.  In Joe Barton's Congressional district, south of Dallas, is some of the most unhealthy air in Texas, similar to levels found in India and China at some times.

It is incongruous that Americans, who cherish nature and a clean environment would allow politicians to dirty our most precious resources, clean air, clean water, clean soil.

But we must scold India and China, for allowing their business, industry and power production to choke their people, with the most polluted air on earth.  Just a few minutes in Beijing on a hot humid day, will coat your skin and clothes with filth, and a white shirt will turn grey silt in color. I shudder to consider what the lungs of people, especially children, who live and work in these cities must be like.

By contrast, Nepal is clean but gets overflow from India and has worked hard to keep it that way. For example 80% of the hotels in Kathmandu use solar powered water heating, because it is cheap, efficient, and good for the environment.

China is so concentrated in pollution, that the 'black' marks for dirty power plants can hardly be seen. Tibet is clean  (or was before the Chinese came in and started destroying the forests and creating industrial pollution).  Mongolia, the land of "blue sky" is still clean except for one dirty plant, built with the help of Russian and China. The maps say a lot.   MIND YOUR AIR 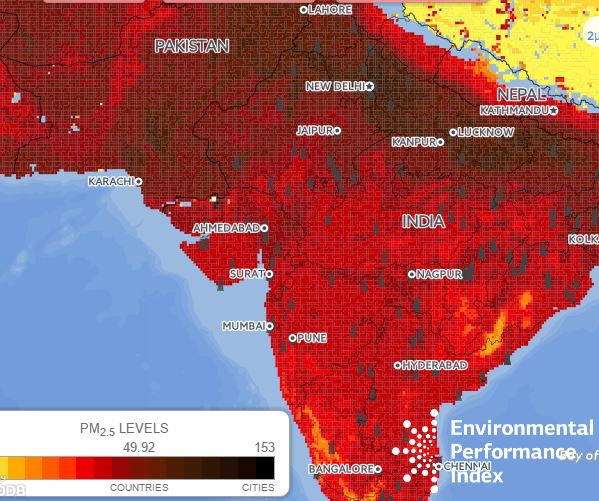 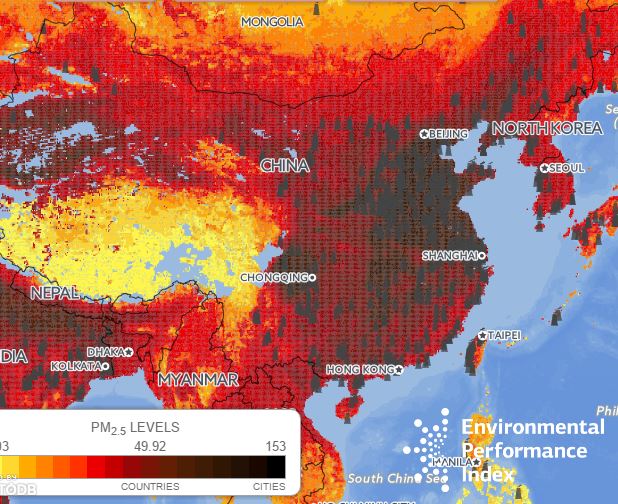