David Letterman made a special appearance on a TV show to say: "I retired and was happy, but ladies and gentlemen, with Donald Trump running for President, my retirement was the worst mistake of my life".  Letterman captured in one sentence what millions of American are thinking.   There are some real "characters" who are shallow and lack expertise who would like to be President.

In this crowd, of Republicans, Romney was out, then in, then withdrew again

(at the urging of his wife who has had enough).  Others are facing pressure to pull out, such as

Donald Trump.  The big money is holding back to let them "weed out themselves" first.

The names that are coming up, are mostly repeats, here are a few....from our seat at BootheGlobalPerspectives we have had pretty good luck at predicting these campaigns, so look at some of the "meat" out there, and we will do several inside articles as the election comes nearer.    BUT IN THE MEANTIME, LOOK AT THESE GUYS, SOME ARE REAL CHARACTERS:

Trump, the promoter, the big hair, the clown promoter who manages to promote million dollar deals.  And the small minded bigot. (Did you know that he has run #1 in some Republican polling for President, and none of the other candidates like him, except Cruz.)  Trump was the subject of a comedian (a star from the now finished TV series "Breaking Bad" who devoted a huge amount of his skit on Trump. In short, he got a standing ovation when he said: "Latinos don't like Trump, we will fight him."

Cruz, the too slick fellow who looks like he preaches for a Holy Roller Tent Revival in East, Texas is one of those who has supported the 31 bills and law suits to destroy the Heath-care (Obama Care) program only to be defeated by the Supreme Court and other bodies every time.  He did his own all day and night filibuster and while reading Dr. Zeus, demonstrated the folly of him as a President. Cruz wants to destroy other things as well, for example the EXIM Bank, which would cost our nation hundreds of millions in economic deals, not to mention tens of thousands of jobs here and abroad. Cruz simply is in over his head.  Better to seek a candidate that knows how to couch policy in "building new initiatives" not in destroying things that help our nation.

Texas's only "Oops, I forgot" candidate, Rick Perry, combs his hair differently, wears "adult glasses" and has memorized more facts.  But the fact is that he proved the Peter Principle when he became governor of Texas, thanks to the mailing list of George W. Bush's rich friends.  Rick "Petered" out, and under scrutiny of the national press, he will again trip on his boots. He is older (trying to look more mature and less casual). Perhaps then he will go to Dubai to that condo that his rich friends were said to have bought for him there.  He can play golf, eat out, and hopefully not make too many speeches.

Mark Huckabee, also from "Hope Arkansas" is a little to folksy and corny for a national campaign and just does not have the image of a President. His singing and country style jokes of his media performance was entertaining but by no means Presidential.  Now he as a VP to Chris Christie might make good energy, certainly entertaining campaigning, and they could become players.  But the "country boy" twangy thing just does not play well out of Arkansas these days.

Chris Christie, from New Jersey is an entertaining speaker, audiences love him. He  showed integrity when Obama came to his state for help during the hurricane. The hard line Republicans won't forgive him for that, so he has an uphill battle. But he would make a good VP for someone? Jeb Bush, no, Christie would outshine Bush, but he could bring life to another Republican candidates. Walker Christie, or Christie Walker...that would be dynamic.

Jeb Bush.....Again?  Seems like a youngster stumbling to find his voice.  He has had several uncertain "media moments" and has not found his stride yet.  But, he knows that Bernie Sanders will bleed votes from Hillary, so he will not attack Bernie.

Scott Walker....Again?  His very ambition seems to say: "I am handsome, quick and will run in any state that will let me"  Shallow, but smart.  Dangerous candidate for the future, thank goodness he does not have huge financial backing. But he could make a great VP for the right man.

Rand Paul...Again?  He wears cowboy boots, props them on Koch's desk and refuses to wear a suit or be humble.  He is too liberal on same sex for the Repubs and really not all that mad about the health care thing.  BUILD A WALL TO KEEP THE MEXICANS OUT?  He also lost the Mexican Hispanic vote. He just wants this as a "trial run" to build his mailing list. He isn't as radical as his dad, but he isn't as effective either.

Joe Biden:  Again and Again?  I love the man...but he is a sad case, too old, too many personality gaffs, he has peaked out. We love him as a senior citizen and a great guy...but he doesn't need to wear himself out on a Presidential campaign.  Biden Trump debate would be a sad thing to watch.

Marco Rubio. Again?  He shot himself in the foot by letting the rich old time Cuban businessmen in Miami push him to oppose naturalization and recognition of Cuba.  This takes him out of the Presidency, unless someone wishes to use him as VP to "take Florida votes" for a Presidential runner.  Rubio seemed young and full of ideas, but the old and big money of Miami has done him in. 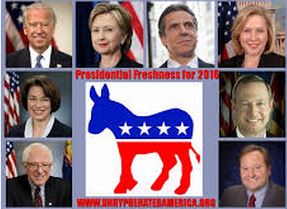 The Democrats look pretty good, after seeing the best that the Republicans have offered.  Hillary offers stability and an improving economy.

Bernie Sanders is busting audience attendance records with his "straight talk" about the economy and dealing with the huge concentrations of power that has taken over the USA.  No other candidate seems to have the courage to go after the big money big power crowd on Wall Street. Hillary has the contacts, experience and the party organization behind her, and the women vote will back her...but Sanders is coming on strong.

Hillary Clinton....Again?  I like her but time is passing her by.  She knows that Don Trump will bleed votes from Jeb Bush, so she will put out the bait and attack Trump to nail the Latino Votes and lure them away from Jeb's Hispanic ties. Hillary has so many credentials and so much experience, she could be a good president.  But can she generate the energy and excitement that Democrats need to get out the vote.  She needs a strong running mate for that.

Bernie Sanders:  In Arizona they booked a 2,000 room hall for a speech by him, this week. They had over 5000 ticket pre-sales, so moved to a 5,000 room hall.  Then they panicked when 10,000 showed up and moved to a 10,000 room hall and overflowed it...all this week...as we speak. The man has charisma and knowledge and his time is right...he just does not have a party organization behind him.  Bernie might get Bush elected by taking votes away from Hillary...but he does generate enthusiasm and a longing for truth to deal with the big business domination of America. He has generated more small contributions than any other candidate, of either party.  Perhaps he can do it without the big corporate bucks!

Would a Hillary/Sanders ticket be a winner?   Probably more powerful than a Hillary/Castro ticket.  But what about a Bernie Sanders/Castro ticket?  Wow. This would give the right wing a huge target, a liberal Hispanic and a Liberal (kind of, socialist),  but it would be fun, entertaining and energizing all around. Both are smart, proactive, pragmatic and frankly, just fun to listen to.

How about a Bush/Walker ticket? Two young handsome guys, both with good instincts, and not so old and grumpy...they could make a case for the "New Republican Party" (not your father's Cadillac idea).

Have I given you enough for an exciting dinner conversation and to donate money to your favorite?

Watch and see. It will be a fun election.   As for me, I will eat Pie. Pie is the answer to all issues political  More on this later.