FRANCIS SCHAEFFER, SWITZERLAND, AND A PHILOSOPHY OF ETHICS

When I was younger, I loved to go to Switzerland.  A lot of educated and affluent people live there, plus the mountains, food and lifestyle suited me well. The mountains inspire and lift me. 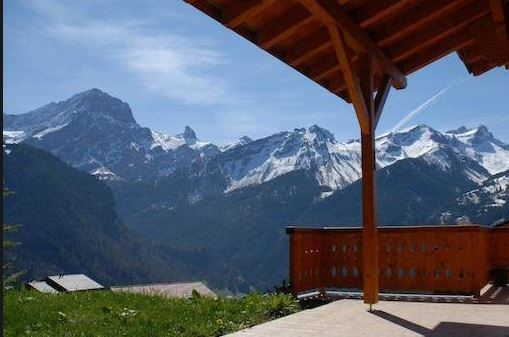 Once I was cooking breakfast for a group of German youth and they said: "You Americans, all you eat is sugar, in your cereal, in your pancakes, you even put fruit on your bread."  I kept cooking, two meals, one with German nuts and oats and no sugar and an American breakfast, of cereal, eggs, bacon, toast, honey, pancakes and syrup.    They all ate the American meal, and then we went and climbed a peak and sang "HOW GREAT THOU ART".  I do not know if it was the sugar or not, but it seemed like a spiritual high, in many ways that day.

I ran across some extraordinary people who wanted to drive me to the Francis Schaeffer Foundation "Camp", a Chalet in a beautiful setting, of Gryon, Switzerland.  Francis Schaeffer and his followers who took over after his death, Udo and Deborah Middelmann, kept this "Camp Retreat" where people from throughout the world were welcome to come, to think, study, spend the night and discuss deeper concepts.  One time when I visited they were digging a new sewer line, so my spiritual research included digging a deep long trench for the sewer line. (I hope that is not metaphoric of my spiritual path in life).

They have stayed in touch all of these years, either out of intellectual stimulation or appreciation for that sewer line. Udo Middelmann travels to the USA and gives a series of lectures every year with an exchange of "spiritual ideas" and perhaps this planted the seed for BootheGlobalPerspectives which I have published for over 27 years and now has about 300,000 readers.  Udo sends me ideas from Schaeffer and has done so for two decades now.  I share some with you my global family.   Exchange and share ideas...not a bad concept.

A few bullets from Francis Schaeffer:

All of these ideas come from activists of the intellect who suggest that we marshal erudition and eloquence in defense of the endangered values of individual liberty and moral and political plurality.  Plato believed in an absolute truth and authoritarianism, and he died because of those.  20th century Fascism is a real danger in our modern world.  Romanticism, and patriotism can get bundled into militant and even genocidal, religious nationalism that we see in many forms...ISIS is only one.

But Francis Schaeffer always enjoyed thinkers who embraced dissent, to get to original minds and ideas that swim against the mainstream of their times.  Ideas must not be underestimated, for "ideas and concepts nurtured in stillness are often overwhelmed by the noise of a movement that can destroy civilizations and personal lives."

Schaeffer would have said: "GIVE ME IDEAS, NOT IDEOLOGY"    "HELP ME TO SHOW COMPASSION TO THE HUMAN STRUGGLE, NOT TO MAKE THE STRUGGLE HARDER"

"ALL HUMANS FACE A FRACTURED REALITY. INSTEAD OF REPEATING TIRED OLD WORDS FOR 30 YEARS, LIFE IS CONSTANTLY CONFLICT, UNFINISHED WITH NEW QUESTIONS AND UNRESOLVED SITUATIONS.  WE MUST ENGAGE THESE WITH LIFE, CREATIVITY, JOY, LOVE AND RESPECT."   Ben Boothe, Sr.

This was what I was calling for in my book: FLOWERS FACING THE SUN    Only now do I see how much Francis Schaeffer contributed to my thinking. Perhaps you all need to come to New Mexico at our CASA GRANDE high overlooking a town and valley below on one side and mountains on the other, for a retreat of ideas.  We'd love to have you.  Bring cereal, milk and something sweet!