There is a new world coming in the United States Economy, this new path will impact people in Canada, Mexico, Europe and Asia. Those who are flexible will succeed.

This future will require managers to:

* Job training will be more important than ever, and companies will have to create stronger ways to "keep" good people. Why?  Because there will be a shortage and the new competitive economy will not allow the time for repeated education to upgrade skills.

* Companies, managers, owners, will have to stay atop of real estate, economic and environmental trends.  You will have to revalue and update your research and assumptions more often than ever. If not, your competition will own your resources, surround and strangle you.

First, take a look at the cities where jobs are chasing people: 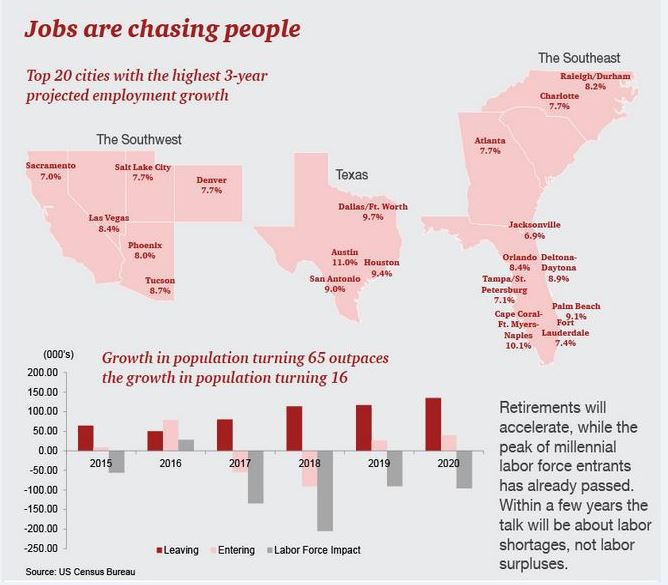 As we can see by the chart there are areas where growth in population and economic trends have caused unprecedented growth.  I recall a few months ago, seeing a headline in Dallas stating that the Dallas/Fort Worth area had added over 60,000 new jobs in 90 days. We will soon see the day when the talk will be about labor shortages, not labor surpluses. This has far reaching implications.

Managers and companies that are not prepared for this kind of demand for qualified workers can find themselves "lost" in a competitive world. Also, companies that do not have s firm handle on real estate values, opportunities where expansion is possible, and the "lending  equity value" of their current property assets may find themselves behind the competition.

We note that the southwestern parts of the country, California, Utah, Arizona, Nevada and Colorado are growing well ahead of other areas. Texas is showing striking growth, in spite of lower oil and gas prices, largely because of economic diversification and the lower cost of living and the lower cost of new construction of commercial and industrial properties.

Companies are moving to Texas because it is simply an example of lower cost to do business, with lower taxes, lower real estate costs and it is "business friendly".

The Southeastern USA, Florida, Georgia and the Carolina's also are showing growth, with a broad diversification of industries.

New Mexico's Governor made a mistake by "shunning" the Movie Industry, and cutting back on incentives for new company expansion and retooling such as INTEL.  This proved to be costly, because Intel has cut back on employees by the thousands, and the Movie Industry has proven to be on of the largest spenders and job creators in the state.  By the time the political leaders corrected their mistake, New Mexico had become one of the few states to actually lose population and jobs. Fortunately in 2015 the state, led by Albuquerque, and the movie industry, is showing growth again. This is a great example of leadership not being aware of economic impacts and "quick flexible thinking" with good numbers of economic trends, values and points of expansion (or contraction).

Atlanta, Georgia and a number of cities near Atlanta have taken advantage of good insights as to growth trends, growth areas, and have incorporated public policy, state incentives, university expansion, and good infrastructure spending, to show one of the fastest job growth areas of the nation.  Developers there know they have friends who are on top of things at the city, county and state level and they work together to create jobs, financing and opportunity.  Boothe & Associates has been involved in appraisal, and large development project planning that has subsequently been used with county and city leaders to open up new development and jobs there.

Even with oil and gas prices going down, layoffs in some energy areas, (such as Hobbs, NM,  Farmington, NM, Southeast Texas, parts of Kansas, Arkansas, Oklahoma, and the vast fields in North Dakota and Pennsylvania which have lost jobs ), the energy industry is still creating jobs as prices slowly creep back up.  The oil and gas industry continues to keep many large permanent production jobs, so while there has been pain and loss in some areas, the industry can quickly reset and rehire for new production as prices and demand increase.

BootheGlobalPerspectives predicted the potential and risk for decline over a year before the prices crashed, and the good managers who were atop of our valuation and economic research, were  better prepared for the cut backs, typical in this "boom and bust" industry.

But, technology continues to be a strong leading job creator for the United States and this combined with millions of small businesses, as well as a strong farm/agricultural economy, shows great promise for the U.S. Economy.

We have noted many times that the strongest and most stable economic systems in the world, have good solid production.  A pure service economy is enslaved to those economies that "make something, produce something, build something."   It is foolhardy and self defeating to send our industrial, manufacturing and production jobs to cheap labor countries, because we cut our own economic throat as a nation.

The high technology industries create, make and build. No wonder that Apple computer now is the richest company in the world. EXXON is not far behind.  In fact, of the 20 richest companies in the world, most of them are either technology, oil or manufacturing companies, and most of them are still in the USA. But, remember, Agriculture is a multi-billion dollar "production" sector.  As we look at the price of food, grains, and fibers going up throughout the world, agriculture is the economy that keeps some nations economically sound. India without agriculture would be a disaster.  Russia, China, Canada, Mexico and the USA would be broke without agriculture.  Also economies that are supportive of and create a good environment for new entrepreneurial business development, and for small business, do better.

So we suggest that the United States, with high technology and energy has a great advantage, but our real secret is our diversified and progressive economy.

All of these factors suggest that a good handle of economics, statistics, business planning, and valuations is important. We at the Boothe Companies stay atop economic trends and that is why we have 250,000 to 300,000 readers.  We are willing to share our service in Appraisals, Environmental Reporting and Economic business planning through our consulting services.  We have done work in 30 states and a number of international venues. Our clients have included States, Cities, Counties, and several national entities.  We also have done work and completed over 5,000 reports for business, industry and lenders.

Companies should consider their appraisal companies, like in house economic consultants, because value and projections of future value, may give indications of future business planning and strategy.

We see a good future for the United States economy but also stay atop of hard facts.  Note the following information

US GDP Contracts Less Than Expected in Q1

The above information suggests that the diversified economy of the USA enabled the USA economy to do better than anticipated, in spite of the huge drop in oil and gas prices and cut backs in those industries.  The diversity and underlying strength of the economy in 2015 gives us reason to be optimistic about future real estate values and economic growth.

When people are employed and are moving into an area, housing construction increases, this increases job opportunities, attracting more people, so it is a revolving door of economic growth.  Uncertainty tends to slow down new projects, commercial and residential.  Thus, note the following report and potential impacts upon your "economy". Indications are that the pending home sales index in the USA are more positive than we have seen in many years. As uncertain as the "world economy" seems to be, the USA economy appears to have fundamental strength.