Soon A Texas Town Will Run On 100 Percent Renewable Energy...Why not yours?

BGP Publisher Comment    We give credit to Popular Science and Mary Beth Griggs for this article, and have reprinted it from internet sources.   We thought the article important and of interest to our readers. We wish to encourage people to look at Popular Science, and follow Mary Beth Griggs for other stimulating articles. We have also added comments from our sources. 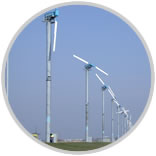 Renewable energy is having its moment in the sun...and wind, and water. Costa Rica recently managed to run on 100 percent renewable power for over 75 days. And in Texas, a state historically associated with oil wells, one metropolis is determined to achieve the same goal, going cold turkey on fossil fuels by 2017.

Georgetown, Texas is a relatively small city of 50,000 people, and its city-run utility recently announced that it would rely entirely on wind and solar energy in just two years. Georgetown plans to achieve this feat by purchasing energy from local solar and wind ventures. Texas gets plenty of sun during the days, and it tends to get windy in the state at night, so getting energy from both sources should cover the energy needs of the town. In an additional benefit, the move also saves water in a state that is notoriously dry. As Slate notes coal-burning power plants not only rely on non-renewable fossil fuels, but also use up stunning amounts of water, a resource also craved by agriculture, and, well, people.

The equation of wind and solar that works so well in Texas doesn't get the same results in other places. Costa Rica, for example, managed to keep its renewable streak alive thanks to strong rainfall that boosted output at their hydroelectric power plants. The combination of hydroelectric with geothermal plants in a country with ample volcanos kept the lights on in the Central American country. Luckily, with renewable energy, there are plenty of options that end up with the same, green result--and less fossil fuels.

BGP comments:  In much of the Great Plains and the Southwestern USA, a combination of solar power and wind power makes good economic sense.  For example the highest wind months (March, April, May) often have the most rain and cloudy days.  The lowest wind months (July, August) often have the most intense sunlight days.  When the two are combined, they compliment one another.  In some places, wind power is not practical, but solar is, and visa versa.  We have noted the expansion of solar energy and in 2014 we saw the fastest growth of the use of solar energy in history, in the USA. As solar grows, we have heard much more acceptance in the general culture. The other day, I was sitting with a banker, at Southwest Capital Bank in the town of Las Vegas, New Mexico. I said: "I do not understand why every restaurant, every office, every bank does not have solar power on the roof!"   The banker, Mike Melton, replied. "We have solar panels on our roof making electricity as we speak.".    This is an example of how solar power is gaining in popularity and acceptance.  While the big utility companies have been slow to promote widespread solar use, the American people have caught on and are head of them. It has become a multi-billion dollar industry.  And listen to our words, our prophecy, "One day we will see almost every office building, every resturant, have some form of solar energy. Why? Because it is clean, it makes energy and saves money, and it is not only good business, it is good for our nation." 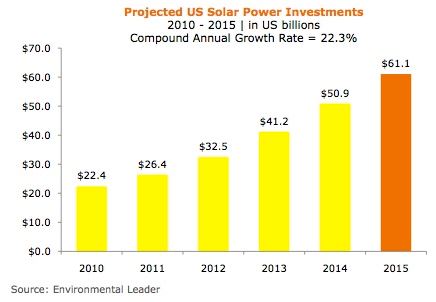