We at BootheGlobalPerspectives (BGP) found this research study on Wind Power, with past performance and future projections of Wind Energy Impacts very informative. We have included some of the highlights and invite you to copy and use these as you wish.  For anyone interested in electric energy, whether it be wind, coal, natural gas, hydro, solar or nuclear, this report has good information. 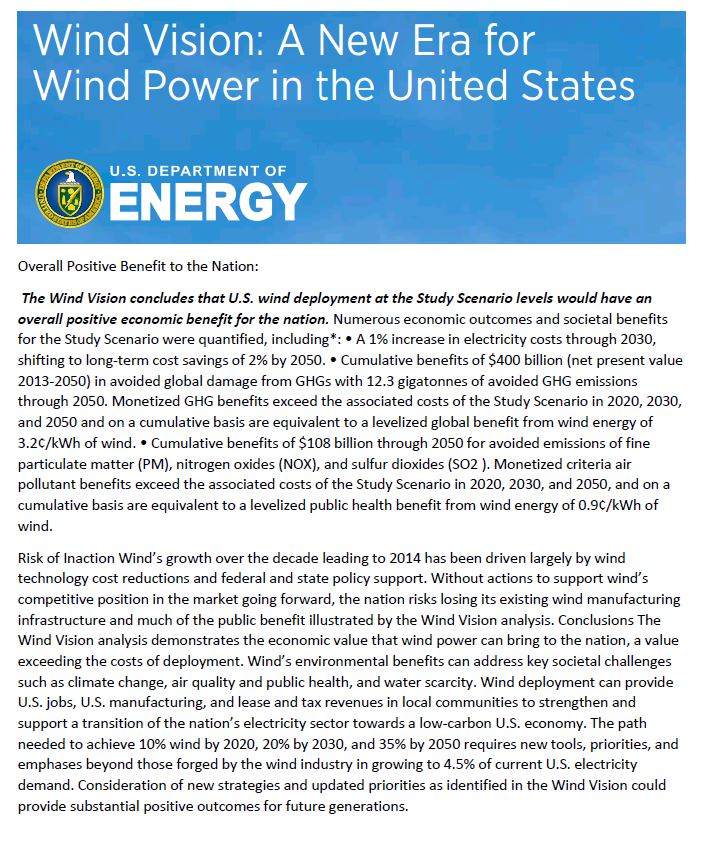 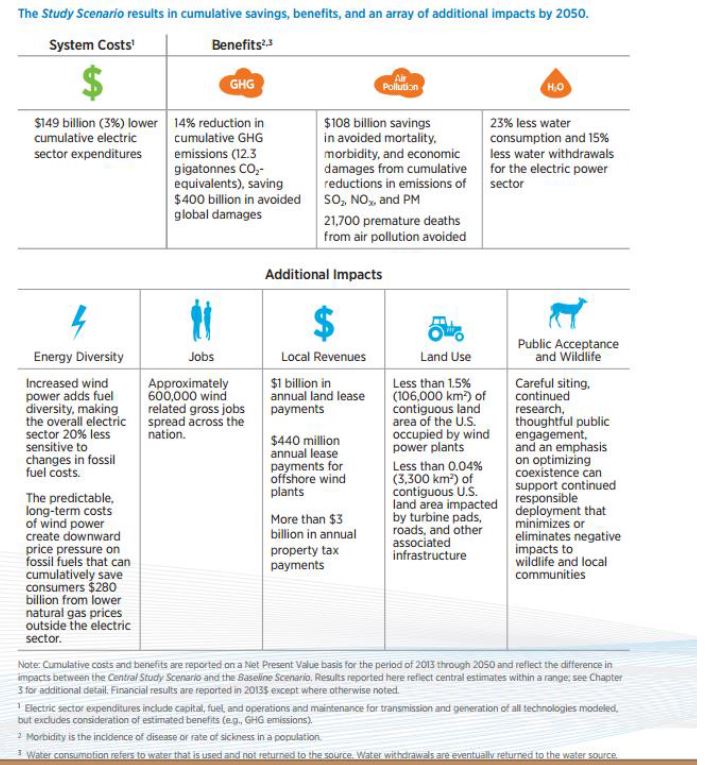 Wind power is one of the fastest-growing sources of new electricity supply and the largest source of new renewable power generation added in the United States since 2000. Wind power generation in the United States has tripled, increasing from 1.5% of annual electricity end-use demand in 2008 to 4.5% through 2013. As of 2013, there were more than 61 gigawatts (GW) of wind generating capacity installed, and electric system operators and utilities throughout the country routinely consider wind power as part of a diverse electricity generation portfolio.

At the same time, low natural gas prices, low wholesale electricity prices, and reduced demand for electricity since 2008 are impacting investments for all new electric generation. Annual U.S. wind capacity additions have varied dramatically as a function of these factors as well as trends in wind power costs and policy. 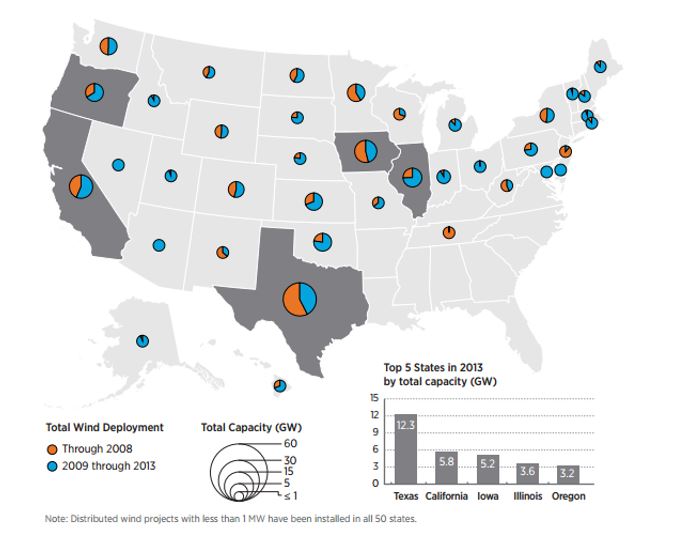 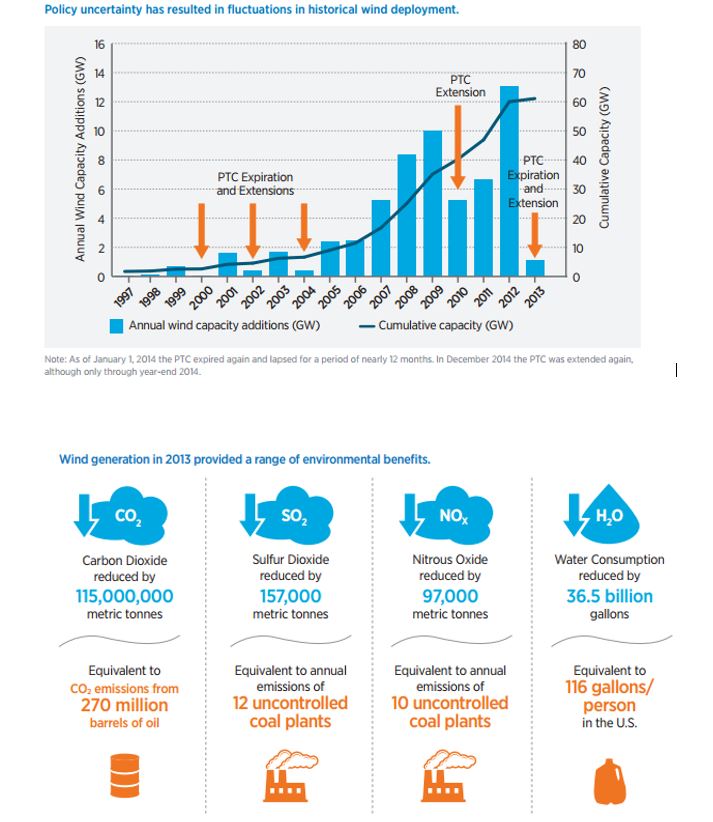 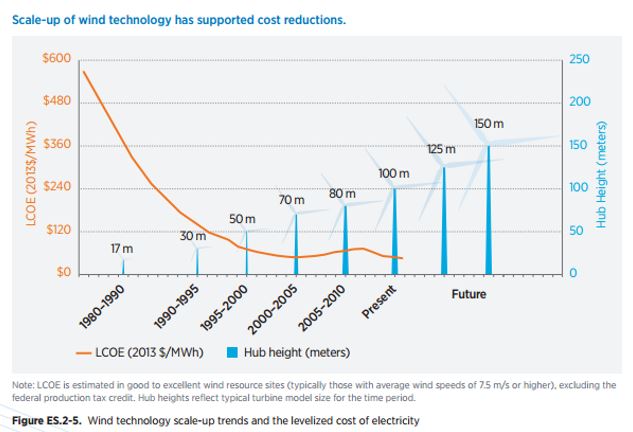 WIND ALREADY PROVEN TO BE EFFICIENT AND INEXPENSIVE:

Large amounts of wind power are reliably and effectively integrated into the electric power system. Wind power contributed 4.5% of U.S. electricity demand and 3.2% of global electricity demand through 2013; two states, Iowa and South Dakota, exceeded 25% of in-state generation from wind in 2013; and seven other states operated with greater than 12% of their annual electricity generation from wind (Colorado, Idaho, Kansas, Minnesota, North Dakota, Oklahoma, and Oregon). Power system operators who have experience with wind now view its use routinely as a dependable component in the portfolio of generating options. Wind power has been successfully integrated into the power system and can contribute to grid management services in flexible power systems. 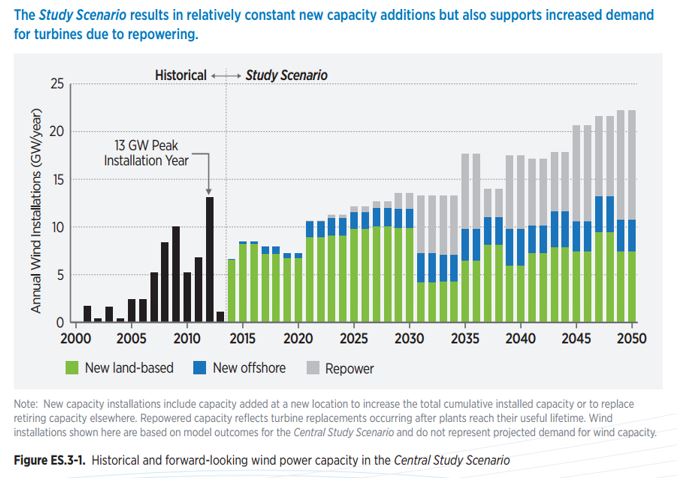 The Central Study Scenario results in reductions in other air pollutants (e.g., PM, SO2, and NOx ), yielding societal health and environmental benefits that range from $52–$272 billion (2013–2050, discounted present values) depending on the methods of quantification.

The majority of the benefits come from reduced premature mortality due to reductions in SO2 emissions in the eastern United States.

In total, the health and environmental benefits are equivalent to a benefit of wind energy that ranges from 0.4¢/kWh of wind to 2.2 ¢/kWh of wind. Table ES.3-3 highlights some of the air pollution benefits. 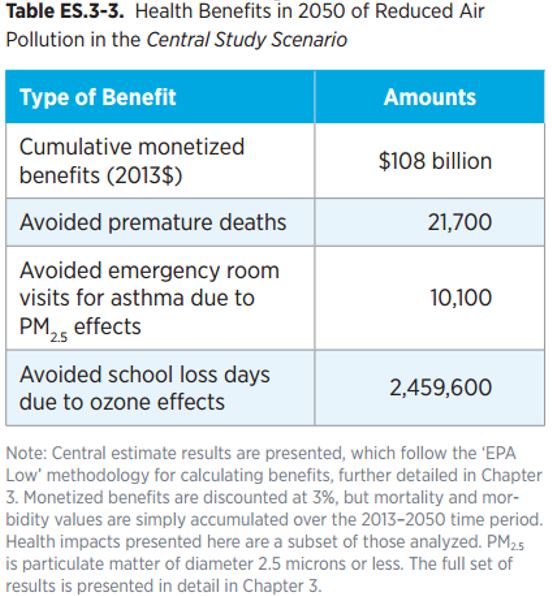 Anticipated reductions, relative to the Baseline Scenario, exist in many parts of the United States, including the water-stressed arid states in the Southwest (Figure ES.3-5). Reductions in water use driven by the Study Scenario would have environmental and economic benefits, and would help reduce competition for scarce water resources. The value of reduced GHG and air pollution emissions in the Central Study Scenario relative to the Baseline Scenario exceeds the under 1% cost increase in electricity rates in 2020 and 2030.

By 2050, the Central Study Scenario results in savings across all three categories—electricity rates, GHG emissions, and air pollution emissions.

(Figure ES.3-6). Savings are also incurred on a cumulative basis across all three metrics (Figure ES.3-7). The range of GHG benefits was estimated following the Interagency Working Group’s Social Cost of Carbon methodology and varying discount rates. The range of air pollution benefits was calculated following methodologies of the U.S. Environmental Protection Agency (EPA) and the Air Pollution Emission Experiments and Policy model, known as AP2. Several other categories of impacts such as water use are analyzed but not monetized, due to a lack of established peer-reviewed, national-scale methodologies. 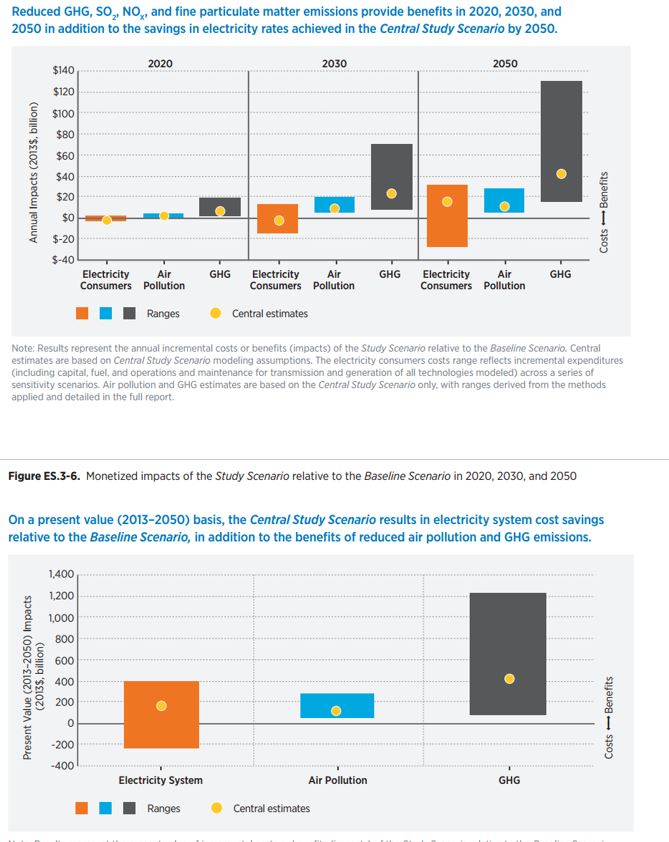 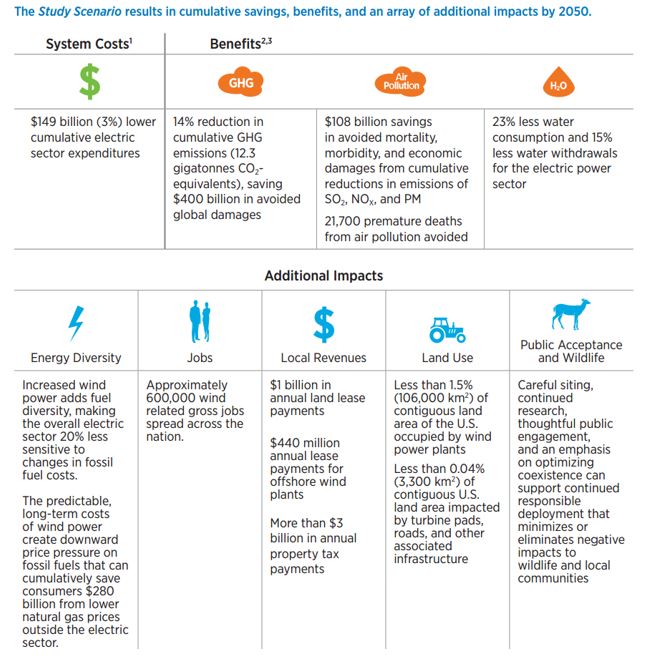 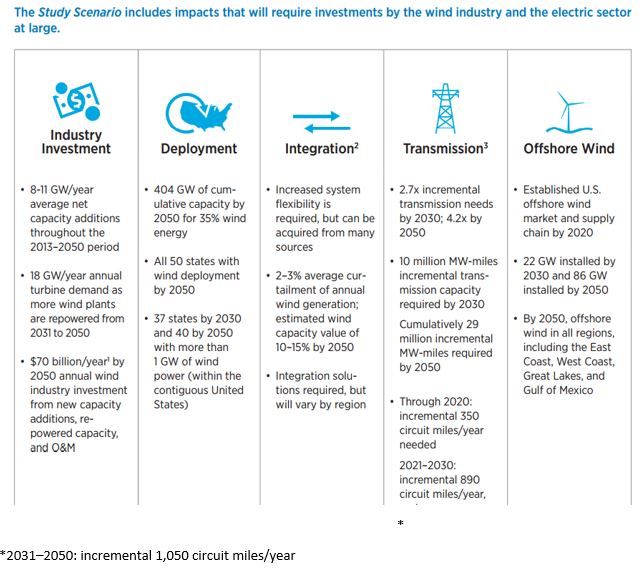 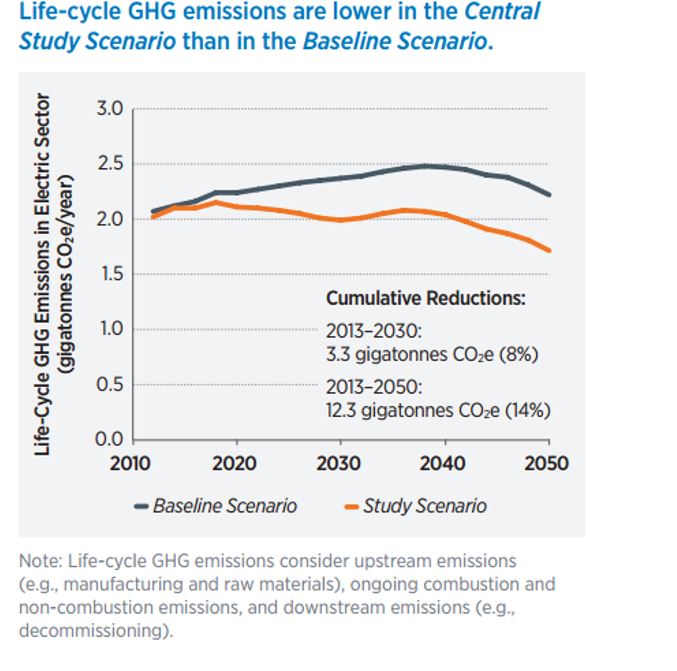 Based upon all of this information, and there is much more in the report, it appears the the economic and business future of wind is excellent.  Plus, the potential savings to the American economy and the electric consumers of the USA is significant. This with additional jobs, and billions in savings in water, health costs and savings of carbon based fuels for more strategic needs, makes extensive expansion of Wind Energy in the USA, plausible and a point of national security. 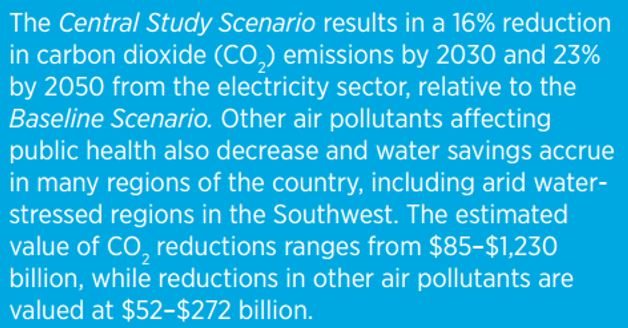