80% of U.S. Companies will face Survival Threatening Choices in the next Two Years.

Within 2 years, over 80% of U.S. Corporations, will face a survival challenging situation, and the decision that they make, in face of adversity, in all probability, will determine the future success or failure of that company.  John Chambers, CEO of Cisco, strongly believes that the flexibility to change and adapt to high technology systems is a key to corporate success.  He has been named by Time Magazine, as one of the 100 most influential people in the USA. He has been a commissioner for the Broadband Commission for Digital Development which leverages broadband technologies as a key enabler for social and economic development. His company sales have grown to $46,000,000,000 (FORTY SIX BILLION) under his leadership.

He believes that knowledge, data, the ability to understand and organize it, and the ability to make it relevant to decision making is the key to future winners and losers.  In interviews he notes that companies that know what to study, what data to watch, how to evaluate it, are companies that are more likely to achieve success. Company executives that are not flexible or not on top of new information sources, will fall behind…many become irrelevant, and their companies will not compete well in the new “information age”.

An example of this kind of data study, is a survey, by Linked In on how jobs are achieved, in America today.  Linked in, has discovered that over 20% of key people, find new jobs, by use of data services such as “Linked In” to have at least one personal relationship in the company that they wish to hire them.

In a blog post published today, data analytics specialist Peter Rigano examined the range of LinkedIn contacts held by each member of the social network that got a new job in October 2014. His objective: to see what percentage of them — at least six months before switching jobs — had established at least one connection with an employee or manager of the company that eventually hired them.

On average, he found, 16% of all hiring involved job candidates with well-established connections into their new employer. In some cases, Rigano writes, those connections may have led to formal job referrals. In other cases, candidates may simply have learned about job openings informally, through their professional network of friends, acquaintances and other contacts.

Rigano’s analysis unearthed some wide differences among industries, in terms of how common it is for new hires to have existing contacts with their prospective employers. The most tightly networked fields, according to LinkedIn data, include computer games, computer and network security, venture capital/private equity and political organizations. As the table below shows, all of these fields did at least 26% of their hiring from existing employee networks. 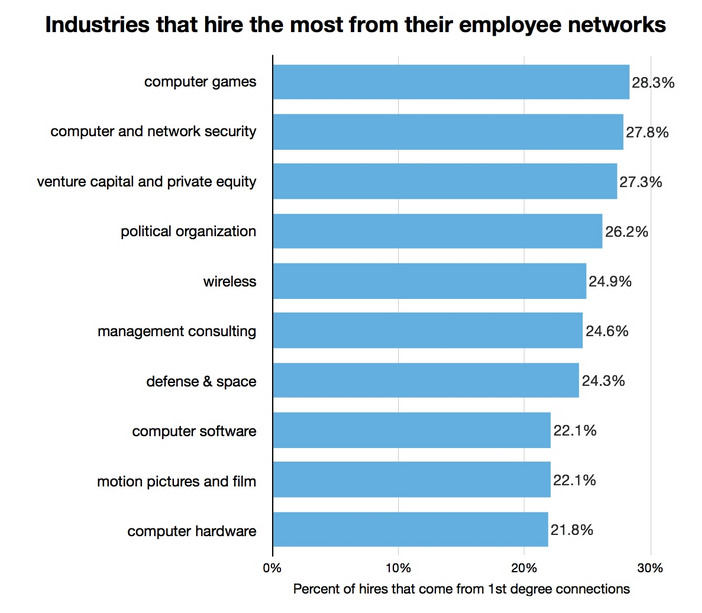 The point is that this is a great example of using knowledge and data to achieve higher probability of success.  The data is available,

and the ones who take the initiative to get the data, organize it, understand how to utilize it, will have greater means of future success.