Comment from BGP: We give credit to Science.Mic for this article written by Jordan Valinsky. This goes well with several reports we have made on the drought environment. BBB

Scientists have bad news for West Coasters in the grips of the worst drought in decades: The worst is yet to come.

The record-shattering drought currently gripping California is a light crudité compared to the "mega-drought" that's expected to envelop the Southwest and Great Plains over the next 35 years, NASA revealed Thursday. The full study, ominously named "Unprecedented 21st century drought risk in the American Southwest and Central Plains," was published in Science Advances.

The study, compiled by scientists from the space agency, Cornell University, and Columbia University, predicts an 80% chance that the Great Plains and the American Southwest will endure a major weather shift beginning in 2050, which could spark massive wildfires and water shortages if the current pace of climate change continues.

Most alarming: The forecasted drought accompanying the weather shift could be of a severity not seen within the past 1,000 years. The photos of California lakes drying up in 2014 may seem mild compared to what this computer study projects.

"We really need to start thinking in longer-term horizons about how we're going to manage it," said study coauthor Toby R. Ault, per the Washington Post. "This is a slow-moving natural hazard that humans are used to dealing with and used to managing."

The Charts study the average dryness of the soil, as projected by this computer study.

A mega-drought, which is a drought that lasts for several decades instead of the usual three years, causes ecological and agricultural damage on a planetary scale. "I was honestly surprised at just how dry the future is likely to be," Ault said at a press conference, according to Business Insider. "I look at these future mega-droughts like a slow-moving natural disaster. We have to put mega-droughts into the same category as other natural disasters that can be dealt with through risk management." 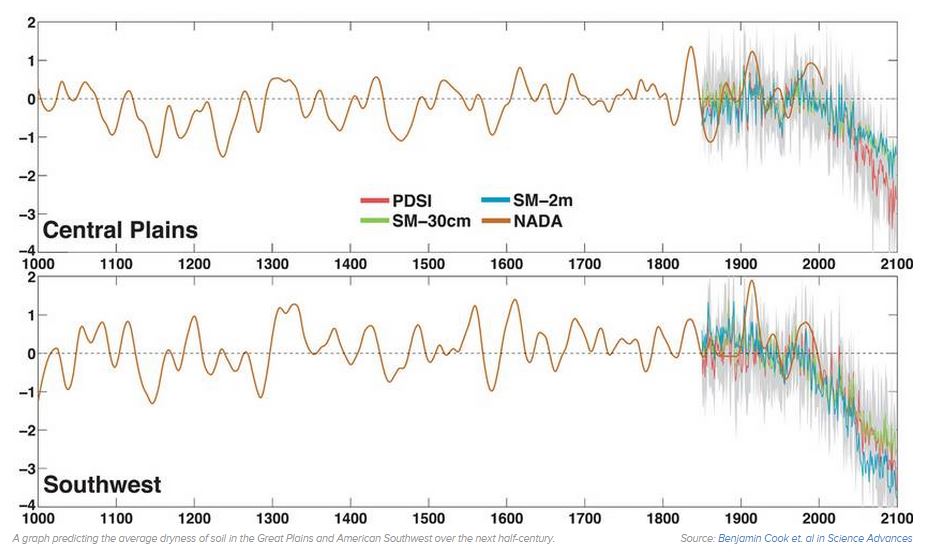 How did they figure this out? Scientists studied past droughts using tree rings to determine how much rain fell hundreds (and thousands) of years ago. They then ran that data through 17 computer models of potential future temperatures across North America, which then predicted this bleak outlook.

"Natural droughts like the 1930’s Dust Bowl and the current drought in the Southwest have historically lasted maybe a decade or a little less," said Ben Cook, a climate scientist at NASA's Goddard Institute for Space Studies, according to Business Insider. "What these results are saying is we're going to get a drought similar to those events, but it is probably going to last at least 30 to 35 years."

This could change. The predictions are dire, but not exact. Weather patterns could change directions, global warming could be mitigated, and even just one El Niño out West could disrupt a season of drought in the entire region. Still, a drought of some variety is certain. "We are the first to do this kind of quantitative comparison between the projections and the distant past, and the story is a bit bleak," said Jason Smerdon, another of the study's authors and a climate scientist from Columbia University, according to Business Insider. "Even when selecting for the worst mega-drought-dominated period, the 21st century projections make the mega-droughts seem like quaint walks through the Garden of Eden."