(Editorial note  from BGP , BootheGlobalPerspectives: Credit and thanks goes to Phillip "Trey" Finley and his associates, with  Lobo Wealth Strategies for providing information used in this article. He tapped reports from the Department of Labor Statistics and the Federal Reserve giving an interesting metric of jobs and hiring in 2014.  We will continue to report future implications of the Winners and Losers in the 2015 economy, and believe the rising price of silver, gold and diamonds reflects investor uncertainty and this combined with the low price of oil will have important impacts on the US and world economies.)

The chart below shows the connection between educational attainment and unemployment rate. The group of people with the highest rate of unemployment are the least educated without even a high school degree. The unemployment rate for this group is almost triple that of college graduates. The more education you have, the better off you are, according to this data. About 30% of the U.S. population has a college degree. 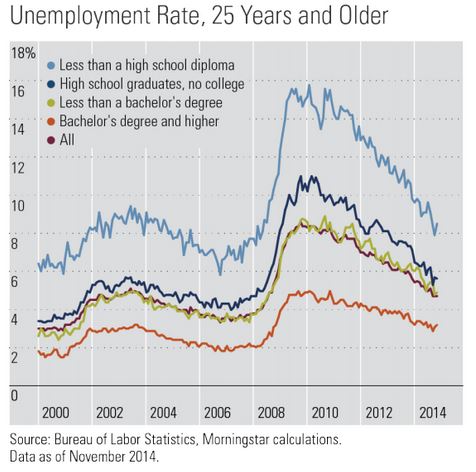 This chart sends a message that we really haven't seen before. Note "hires" vs "job openings".  Job openings are at the best level since 2001. It suggest that there are increasingly less workers matched with the jobs that are being posted and it may soon force employers to increase wages in order to fulfill those unmatched job openings.

(Comment from BGP: These statistics do not take into consideration  layoffs in the oil and gas drilling and production industry, which have risen with the decline in the price of oil significantly in early 2015. Also these statistics cannot detail the "underemployed", being people who had middle management jobs, but now have taken lower level jobs. But all in all, the overall statistics confirm job growth overall, better than we have seen since 2008.)

Other factors to consider for 2015:

2. Slowing international markets are of concern. Russia, the Ukraine, Iran, Greece, Spain, Portugal, Egypt, Libya, Cuba all face economic challenges and high unemployment. China has been fighting and hiding a recession for 4 years now, and the low price of oil may actually help China to recover.

3. Slow housing market in many sectors of the USA dropped from 5.25 million units to 4.93 units in November of 2014. (although pockets in the Southwest have shown robust construction in apartments, condominiums and town-homes)

4. Rising interest rates could be a factor in 2015  if inflation does pop up, but this may be unlikely with the decline in oil prices. The Consumer Price Index fell .3%  in November of 2014.  Economists have mixed reviews of the overall impact of an oil price decline on the nation. Economists from oil producing states suggest that a low price of oil will cause an overall decline nationally. Economists in non oil producing states favor the idea that lower fuel costs will offset job losses from low oil prices in drilling areas and that the economic impact will be positive nationally.

5. Consumption and retail spending appears to be up. Automotive sales are the highest in years.

6. The savings rate has fallen sharply.

8. Consumer sales represent 70% of the U.S. Gross Domestic Production, and everyone is interested to see implications of lower oil prices, vs declines in consumer sales in oil producing areas. Morningstar economists believe that minimum wages and hourly wages will increase.  According to Morning Star's Market Barometer, the U.S. Stock Market provided a median return of 12.85% for the year of 2014.

9. There are many condominium, apartment and residential construction developments underway across the nation.